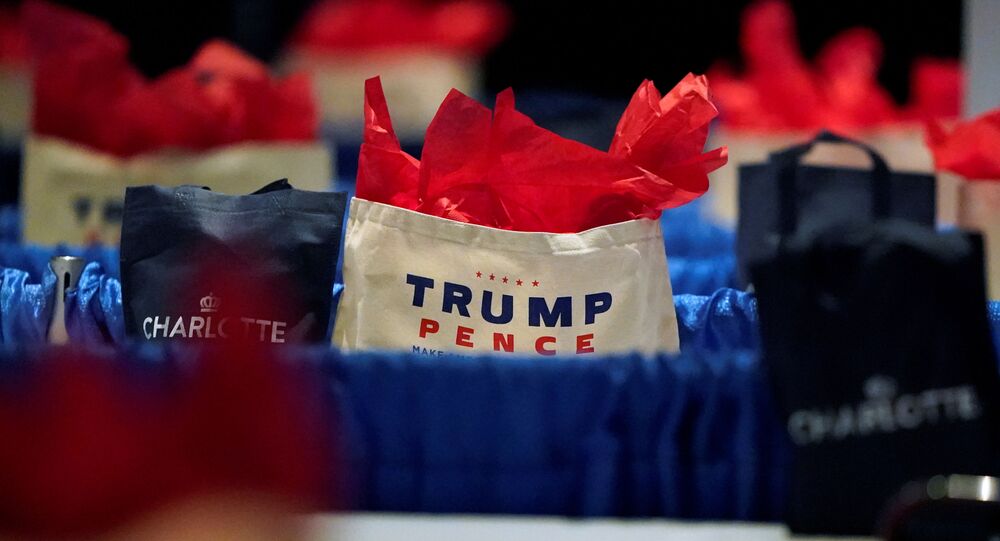 A slew of issues pertaining to the economy, foreign policy and social matters were addressed by a broad lineup of speakers on the second night of the Republican National Convention, that included appearances by First Lady Melania Trump and Secretary of State Mike Pompeo.

The second night of the Republican National Convention kicked off in Charlotte, North Carolina; the RNC began on Monday with Donald Trump and Vice President Mike Pence being formally renominated as the 2020 Republican presidential and vice presidential nominees. The theme of the mostly-online event is "America: Land of Opportunity".

It featured keynote appearances from Secretary of State Mike Pompeo, Eric and Tiffany Trump, and first lady Melania Trump, as they made a case for reelecting President Donald Trump in November.

An economic rebound amid the recession driven by the coronavirus pandemic was touted by White House economic adviser Larry Kudlow, who lauded the emergency spending and tax cuts set in place to mitigate the fallout from the health crisis.

“Hardship and heartbreak were everywhere… but right now, our economic health is coming back,” he said.

The White House economic adviser claimed that Donald Trump had inherited a "stagnant economy on the front end of recession" from the Obama administration, which the President had successfully rebuilt in three years.

"There's a housing boom, there's an auto boom, a manufacturing boom, a consumer spending boom, stocks are in record territory, and a V-shaped recovery is pointing to better than 20 percent growth in the second half of this year," Kudlow said.

Kudlow warned that Trump’s Democratic rival in the race to the White House would raise taxes as the US was emerging from the pandemic.

“Our economic choice is very clear: Do you want economic health, prosperity, opportunity and optimism? Or do you want to turn back to the dark days of stagnation, recession and pessimism?” Kudlow said.

"Wages went through the roof. Unemployment reached historic lows, especially for Black Americans, Hispanic Americans and women. Trade deals were ripped up and renegotiated. Lights were turned back on in abandoned factories across our country. Trillions of dollars are repatriated back to the United States, which had been sitting in foreign lands for far too long," he said.

Tiffany Trump, the president's youngest daughter, made the case for Donald Trump as she addressed those who were, like her, recent graduates.

"I can relate to so many of you who might be looking for a job… My father has built a thriving economy once and believe me, he will do it again."

​She also declared that Trump was the only one who's taken on the "establishment" and "does not run away from challenges".

Secretary of State Mike Pompeo, who addressed the Republican gathering from Jerusalem amid a diplomatic trip to the Middle East, praised several foreign policy initiatives which had been introduced under the Trump administration.

He touted the relaxation of tensions on the Korean Peninsula under the Trump administration, which had “lowered the temperature and, against all odds, got North Korean leadership to the table."

Breaking with past precedent of secretaries of state not addressing political conventions, Mike Pompeo in pre-taped remarks to the RNC praises President Trump's foreign policy, saying he has "led bold initiatives in nearly every corner of the world" https://t.co/Le9MDdEWuZ pic.twitter.com/tIUDoob02O

​He also addressed Washington’s handling of the coronavirus pandemic, claiming President Donald Trump "has held China accountable for covering up the China virus" and for "allowing it to spread death and economic destruction in America and around the world."

"The horrifically incompetent Obama regime inflicted harm on American interests with its fecklessness and naive assistance to Iran and its failure to stop ISIS [Daesh*]. It took Trump and Pompeo to implement a vision and policy for victory over [Daesh] and disentanglement from Iran. Further, our allies know they can count on America, that we will not bow to China and we will not engage in foreign wars anymore without a plan for complete victory and a solid America First predicate to engage militarily in the first case", Gosar said.

Eric Trump had also waded into foreign politics, suggested that his father had achieved peace in the Middle East and brought “never-ending wars” to an end.

"Moving the embassy to Jerusalem; peace in the Middle East. Never-ending wars were finally ended. Promises made and promises for the first time were kept," he said.

"Joe Biden voted for the Iraq War, which President Trump has long called the worst geopolitical mistake of our generation,” said Paul.

Racial issues once again featured prominently amid the sweeping nation-wide protests against police brutality and racism after the death of African American former convict George Floyd in police custody on 25 May.

The night featured a number of Black speakers, such as Daniel Cameron, the Kentucky Attorney General, in an effort to appeal to African American voters.

Fantastic! B4 this convention, I was worried that @GOP was just a bunch old politicians hanging on! With these guys on the rise, the Dems can have the RINOs who jumped ship! They are the old school! Entrenched politicians. Good riddance! I'm with this guy! https://t.co/wJAco5uxij

​As he made his pitch for Donald Trump, Cameron pointed to Biden's controversial statements on race, pronouncing Biden as a "captive to the radical left," which he described as a movement "committed to cancel culture".

"I am Black ... And you can’t tell me how to vote because of the color of my skin," said Cameron.

The Attorney General painted a dismal picture of what he believes Joe Biden would do upon winning the election.

"Joe Biden is a backwards thinker in a world craving forward-looking leadership. There's no wisdom in his record or plan, just a trail of discredited ideas and offensive statements," he said.

"I ask you to judge the record on criminal justice reform: Joe Biden couldn't do it, but President Trump did."

On a softer note, the First Lady Melania Trump capped the night, delivering her live address to the predominantly virtual 2020 Republican National Convention from the Rose Garden of the White House.

As she offered condolences for those who died in the COVID-19 pandemic or suffered in the fallout from it, she expressed her gratitude to the many first responders who have been battling the health crisis on the front lines.

"He's what is best for our country."

​Invoking the racial unrest still polarising American society, the First Lady urged to “look at things from all perspectives” and learn from the past.

"Like all of you, I have reflected on the racial unrest in our country. It is a harsh reality that we are not proud of parts of our history. I encourage you to focus on the future while still learning from the past," she said.

Underscoring that her husband would not be deterred by any “amount of negative or false media headlines”, Melania Trump said:

“Donald Trump has not and will not lose focus…He loves this country and knows how to get things done… He is what is best for our country."