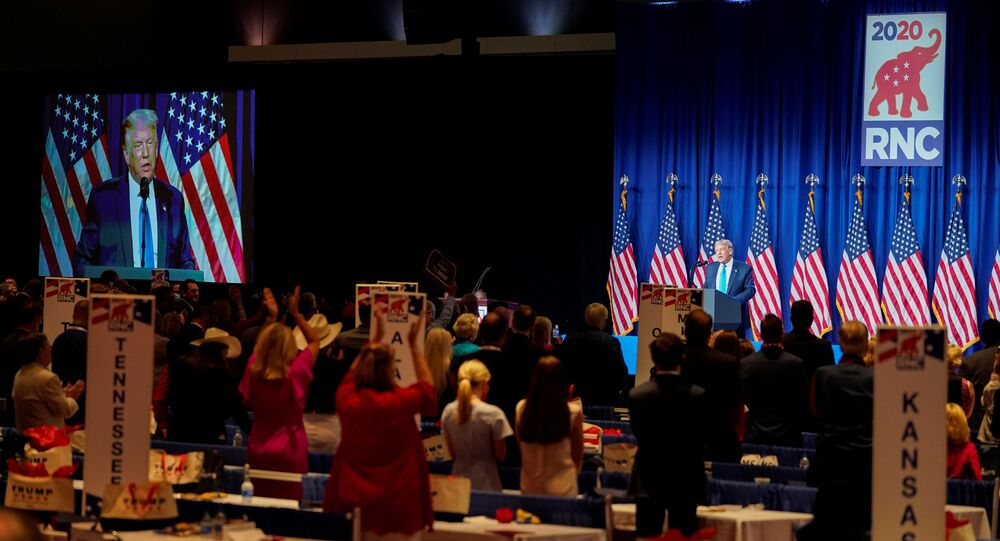 The first night of the Republican National Convention kicked off Monday with Donald Trump and Vice President Mike Pence formally renominated as the 2020 Republican presidential and vice presidential nominees during a roll call vote that took place in Charlotte, North Carolina.

The speakers painted ‘horror-film’ scenarios of the US under Joe Biden as they offered their endorsements of Trump.

President Donald Trump kicked off the event by emphasising that he had steered the nation’s economy to unprecedented heights in defiance of the challenges imposed by the COVID-19 pandemic.

"We just broke a record on jobs, an all-time record… There's never been three months when we've put more people to work. We're just about ready to break the all-time stock market record."

Multiple speakers, including Rep. Vernon Jones, Rep. Jim Jordan and Mark McCloskey, touted the low unemployment rate witnessed under the current administration, crediting President Donald Trump with the “lowest unemployment in 50 years”, adding that he had “built the most inclusive economy ever, with record low unemployment for African Americans".

Echoing the theme of addressing the needs of the working class the President’ son, Donald Trump Jr., slammed Joe Biden’s fiscal policies as “designed to crush the working man and woman”.

He aimed a broadside at the Democrats for attacking his father’s proposed payroll tax cut for the middle class, in a reference to the assertions that Biden and his running-mate Kamala Harris were seeking to impose a $4 trillion tax increase on America.

“Imagine the country you want to live in, one with true equal opportunity and hard work pays off and justice is served with compassion and without partiality. You can have it,” said Trump Jr.

“They think he’s a nice guy,” she said of Biden. “Let me tell you, raising taxes on 82 percent of Americans is not nice. Eliminating 10 million good-paying oil and gas jobs is not nice.”

Florida Republican Rep. Matt Gaetz made the dire warning that the Democrats want what he said was a Hollywood “horror film” for the United States.

"They'll disarm you, empty the prisons, lock you in your home and invite MS-13 to live next door… And the police aren't coming when you call. In Democrat-run cities, they're already being defunded and disbanded."

Trump Jr. also attacked the Democrats and their elected officials in cities that have struggled to maintain order among the protests against police brutality and racism after the death of African American former convict George Floyd in police custody on 25 May.

“Anarchists have been flooding our streets and Democrat mayors are ordering the police to stand down… Small businesses across America — many of them minority owned — are being torched by mobs… we must put an end to racism, and we must ensure that any police officer who abuses their power is held accountable.”

Republican Rep. Jim Jordan, R-Ohio, said that “this election is about who can preserve the values, the principles, and institutions that Make America Great.”

“Don’t believe me? Look at what’s happening in America’s cities—all run by Democrats. Crime, violence, mob rule. Democrats refuse to denounce the mob, and their response to the chaos? Defund the police, defund border patrol, defund the military.”

House Minority Whip Steve Scalise, R-La., who was shot and wounded during a congressional baseball practice in 2017, also warned that the “left wants to defund the police”.

“I wouldn’t be here without the bravery and heroism of the men and women in law enforcement who saved my life. President Trump stands with those brave men and women. Joe Biden has embraced the left’s insane mission to defund them.”

The Democrats were attacked for their stance on racial issues, as former South Carolina Gov. Nikki Haley, the daughter of Indian immigrants, in her speech sought to portray the Republican Party (GOP) as welcoming to Americans of colour, in a nod to the Black Lives Matter movement.

“In much of the Democratic Party, it’s now fashionable to say that America is racist. That is a lie,” said Hayley.

‘Monster of the Swamp’

From the Democrats, the focus shifted onto Joe Biden, as the Republicans warned of imminent “chaos” if the Democratic nominee takes over the White House.

​Donald Trump Jr. suggested that Joe Biden had disregarded previous opportunities as a senator and vice president to “crack down” on China or hammer out trade deals which were more favourable for the working class.

“That makes sense, considering Joe Biden is basically the Loch Ness Monster of the swamp.. For the past half-century, he’s been lurking around in there. He sticks his head up every now and then to run for president, then he disappears and doesn’t do much in between,” said Trump Jr.

Amid the coronavirus pandemic, as part of efforts to dismiss Democrat’s accusations of failing to rise to the challenges of the pandemic, health care workers touted Donald Trump as a pioneering leader who “moved mountains” in his response to the health crisis.

​They praised Trump for pushing treatments and testing through typically lengthy regulatory timelines, expanding tele-health in rural areas, and generally acting decisively to defeat the pandemic.

“Let me be clear, as a health care professional, I can tell you without hesitation Donald Trump's quick action and leadership saved thousands of lives during Covid-19,” said Nurse Amy Johnson Ford.

On healthcare on a broader scale, Donald Trump also asserted that he was the one who ensured that people with preexisting medical problems will be covered by health insurance.

Donald Trump, who trails Democratic presidential nominee Joe Biden in national polls by eight or nine points, will be hoping to use the four days of the Republican convention to convince enough American voters that he deserves another four-year term.

Republican National Convention: What You Need to Know