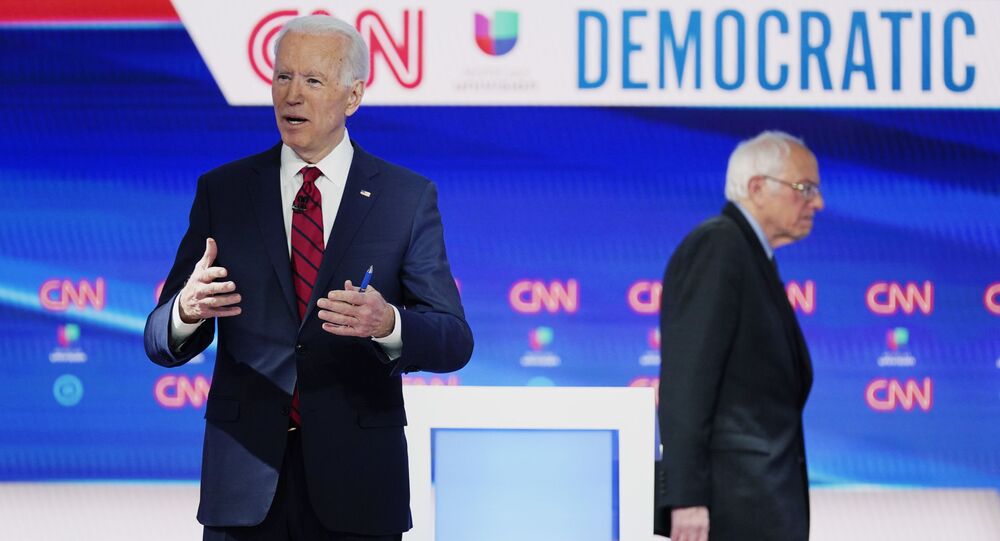 Last week, former US vice-president Joe Biden was officially nominated in the 2020 Democratic National Convention to take on sitting Republican President Donald Trump in the November election, with Vermont Senator Bernie Sanders, Biden’s former rival at the primaries, delivering a speech at the convention in support of his fellow Democratic.

The Democratic nominee for the 2020 US presidential election, Joe Biden, allegedly feared that an endorsement by former primary rival, Senator Bernie Sanders, after winning the nomination, was “ideological jihad”, the former vice-president has revealed in an interview with the New Yorker.

Biden said that he had to “be sure that Bernie was serious” about endorsing him, in order not to embrace the appearance of embracing the policies of the self-described democratic socialist, in particular that about “Medicare for All”.

“I had to be sure that Bernie was serious, that he wasn’t going to make this an ideological jihad,” Biden said, quoted by the magazine. “I said, ‘Bernie, if you want these set up in order for me to insist that I be for Medicare for All [. . .] this is not where it’s going to go.’ But I said, ‘I’m open, I hear you, I’m ready to listen’”.

The former VP was officially nominated at last week’s Democratic Convention to run against Trump in the presidential election on 3 November. Sanders, a strong rival who had once led Biden in the Democratic primaries, was among key Democrats speaking at the DNC in favor of the Biden presidency.

The Vermont Senator, who strongly stood against fellow Democratic candidate Hillary Clinton in the primaries of 2016, announced his endorsement of Biden because he has a “better relationship” with the former vice president than he had with former US Secretary of State Clinton.

“I have a better relationship with Joe Biden than I had with Hillary Clinton,” Sanders told the magazine.

A senior aide to Sanders told the New Yorker that Biden had revealed to the senator during a phone call earlier this month that he wanted “to be the most progressive president since FDR [former US President Franklin D. Roosevelt]”.

The magazine cited former US President Barack Obama saying that the policies of Biden and Sanders are “not that different”, as both seek a better life for all Americans.

Obama stressed that his former VP must change some of his “calculations” in order to keep pace with the changing “circumstances”.

“A lot of times, the issue has to do with ‘How do we go about that, and what are the coalitions we need?’” Obama stated. “What I think the moment has done is to change some of those calculations, not because necessarily Joe’s changed but because circumstances have changed.”

Former Vice President Joe Biden and President Donald Trump have been nominated by their respective parties for the 3 November presidential elections. The Democratic Convention took place between 17 and 20 August, while the Republican Convention kicked off on Monday and is scheduled to end on Thursday, 27 August.