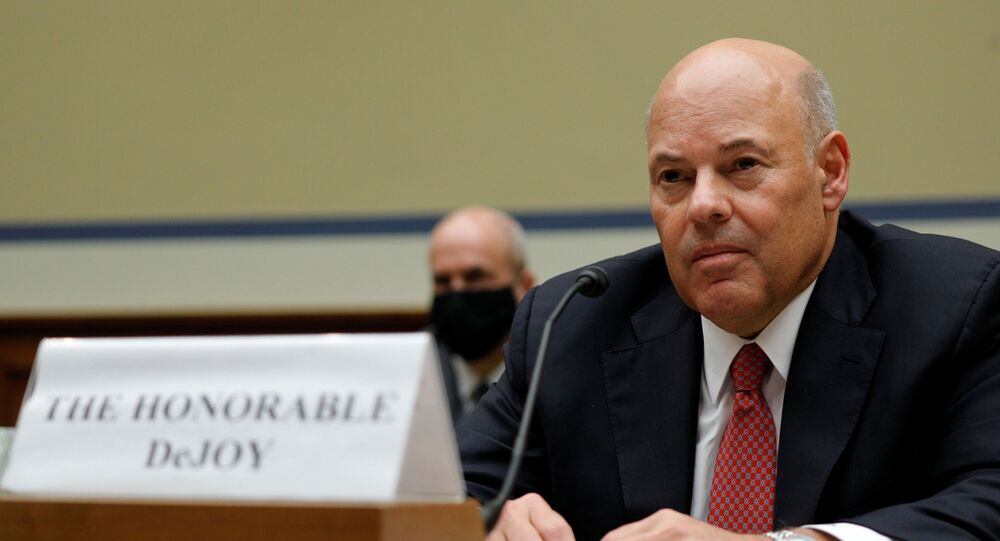 The reforms faced by the United States Postal Service have received criticism from Democrats over allegations of "incompetence at best, criminality at worst" by the Trump-appointed postmaster general, Louis DeJoy, accused of deliberately slowing the work of the federal agency in attempts to disrupt voting by mail in the presidential election.

US Postmaster General Louis DeJoy, during a House Oversight Committee hearing on Monday titled "Protecting the Timely Delivery of Mail, Medicine, and Mail-in Ballots", denied allegations that his recent reforms to the US Postal Service (USPS) were made to disrupt mail-in balloting in the November presidential election.

Many of the claims were made by Democrats on Capitol Hill, who accuse DeJoy of "incompetence at best, criminality at worst" and blame him for slowdowns at the postal service.

He added that he "did, however, suspend these practices to remove any misperceptions about our commitment to delivering this nation’s election mail".

"Any further assertions by the media or electing officials is furthering a false narrative to the American people", he said, stressing that the postal service will be able to handle all election mail for the 2020 election.

Commenting on the changes to the work of the postal service, Robert M. Duncan, the GOP chairman of the Postal Board of Governors, told the committee in a written statement that "some have sought to argue that these long-needed reforms are intended to disrupt the ability of voters to use the mail for voting", asserting, however, that "nothing could be farther from the truth".

Some Democratic lawmakers, referring to a slide presentation allegedly provided by a "whistleblower", have accused DeJoy of making things worse at the postal service. The cited presentation showed that postal delays have increased while DeJoy has been in charge.

Democratic Representative Stephen Lynch slammed DeJoy, alleging that he was keeping the American Postal Workers Union from sorting mail and avoiding delivery worker overtime - something that the recently-installed Postmaster General has denied. Lynch also asserted that it is the first time the US postal service has reported potential issues with getting the mail delivered on time, outlining that the USPS kept working through the Civil War, World War I, the Spanish Flu, the Great Depression, and World War II.

Lynch was joined by Democratic Representative Jim Cooper, who questioned to DeJoy that "somehow you can delay all the mail and get away with it?” after arguing that it is a felony for a postal service officer or employee to delay the delivery of mail. Cooper also alleged that DeJoy was awarding employees for "donations" to Trump's campaign.

DeJoy rejected the accusations, stating instead that he is "in full compliance with all ethical requirements that I need to have", and denying that the mail delays would be a "contribution" to the Trump reelection campaign.

After the hearing, the running mate for Joe Biden - the US 2020 Democratic presidential nominee - Kamala Harris, told ABC News that she does not "necessarily believe anything that [DeJoy] has said when [DeJoy] says that what [DeJoy] has done has had no effect".

"Because I know it to be true that small businesses around our country in these last days [since DeJoy's appointment as the USPS postmaster general], he has withdrawn resources from the Postal Service, are suffering", Harris said.

Republicans and Democrats Clash Over US Postal Service

Democrats on Capitol Hill have been raising claims that US President Donald Trump is trying to "sabotage" mail-in balloting in the upcoming presidential election by holding up coronavirus aid to the US Postal Service.

After USPS released a letter, warning state election officials about possible delays of mail during the election and urging voters to submit their ballots early, US Speaker of the House Nancy Pelosi summoned the entire House from vacation back to Washington, and accused Trump of deliberately disrupting USPS work.

Later, the House approved a bill to immediately provide $25 Billion to US Postal Service and handed it to the GOP-controlled US Senate, which is expected to reject the funding.

"Senate Republicans are committed to making sure the Postal Service remains well equipped to fulfill its important duties. But the President has already made it clear he will not sign the Speaker's partisan stunt into law. And the Senate will absolutely not pass stand-alone legislation for the Postal Service while American families continue to go without more relief", Senate Majority Leader Mitch McConnell said, commenting on the proposed legislation.

Trump admitted that he was reluctant to give funds to the USPS, acknowledging that the money could be used to boost the mail-in voting. While Democrats support voting by mail as a possible safe option to vote amid the COVID-10 pandemic, Trump vehemently opposes it, suggesting it might lead to election fraud.

"What they’re doing is using COVID to steal an election," Trump said. "They’re using COVID to defraud the American people, all of our people, of a fair and free election. We can’t do that."

The US presidential election is scheduled for 3 November, and will see Joe Biden and Donald Trump, both of whom were formally announced by Democrats and the Republicans, respectively, after both parties had their national conventions. Biden chose US Senator Kamala Harris of California as his running mate, and Mike Pence remains Trump's vice president in the upcoming election.

House Approves Bill to Provide $25 Billion to US Postal Service

Tags:
US Election, US Election 2020, US Postal Service (USPS), US
Community standardsDiscussion