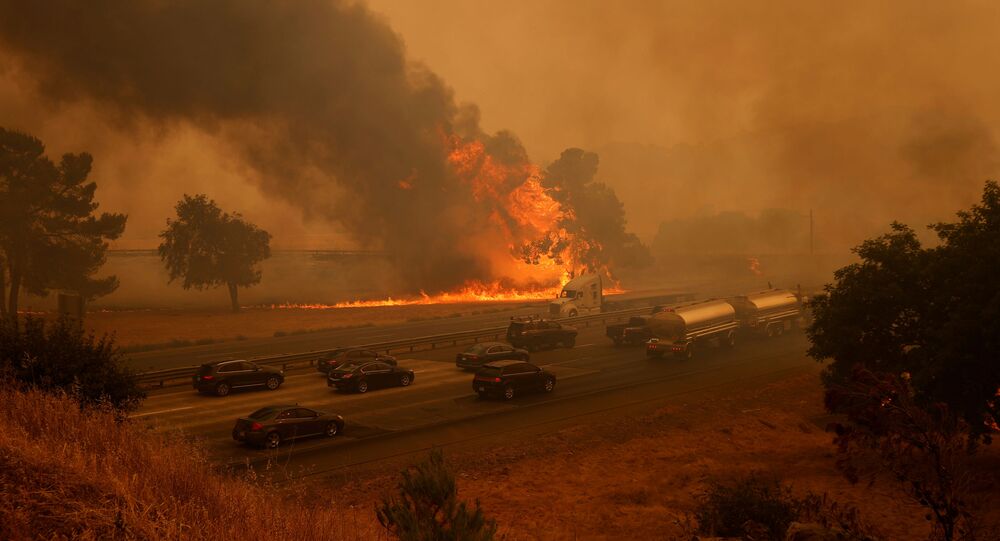 Massive fires are driven by a combination of potent ingredients, such as climate change, volatile wind conditions, and years of fire suppression, claim experts, while in reality wildland conflagrations have become more intense, lasting longer, and burning more acres across California in recent years.

Nearly 12,000 firefighters have currently been battling the flames of almost two dozen major wildfires raging across the entire US state of California.

Over 100,000 people have been ordered to evacuate their homes in Northern California after fires destroyed more than 170 structures, including homes, coming after a relentless heatwave that gripped the region, according to Cal Fire.

If you don’t believe in climate change, come to California.

This is from today. And is just a small part of the nearly 600 fires we are battling this week. pic.twitter.com/iv4stV3Aax

​As of 23 August, devastating flames had ravaged more than one million acres, with just two of the wildfires sweeping Northern California making it into the list of the worst blazes in the state's history.

Here is a look at some of the most destructive fires in California’s history.

Topping the list is the all-time largest fire, the Mendocino Complex. The fire sparked in July 2018 in Lake and Mendocino counties and swept across 459,123 acres - a territory about half of the size of Sacramento County It was finally put out several months later.

© AP Photo / Marcio Jose Sanchez
A fire vehicle is parked ahead of an advancing wildfire Tuesday, July 31, 2018, in Lakeport, Calif. Evacuation orders remained in effect Tuesday for the town of Lakeport, the county seat, along with some smaller communities and a section of the Mendocino National Forest.

More recently, on 21 August 2020, the LNU Lightning Complex became the second-largest wildfire in California history as it engulfed up to 341,243 acres (approximately 1,380 km2), equal to an area more than 11 times the size of San Francisco, by Sunday.

Up to 560 fires burning across California with more than 915,000 acres charred so far, forced evacuation orders for more than 119,000 people. Two fire groupings are the state's 2nd and 4th-largest fires in history. pic.twitter.com/erPf6W4S3f

​The complex fires have destroyed 871 homes and structures and damaged another 234, with the Hennessy Fire alone large enough to make it into the state’s top five. This fire has been mostly contained in Napa County, charring 287,811 acres.

Containment is reportedly at 17 percent, according to authorities.

Cal Fire incident commander Sean Kavanaugh was cited as saying 1,704 personnel have been assigned to combat the LNU fire, including 233 fire engines.

The currently ongoing SCU Lightning Complex, which sparked on 16 August 2020, became the third-largest fire after sweeping across a territory equivalent to approximately 11 San Franciscos, and scorching 339,968 acres, (1,375 km2) according to an update on 22 August.

© AP Photo / Mike Eliason
In this photo provided by the Santa Barbara County Fire Department, Santa Barbara County Firefighters haul dozens of pounds of hose and equipment down steep terrain below E. Camino Cielo to root out and extinguish smoldering hot spots in Santa Barbara, Calif., Tuesday, Dec. 19, 2017. Officials estimate that the Thomas Fire will grow to become the biggest in California history before full containment, expected by Jan. 7, 2018.

It was finally stamped out on 12 January 2018. Ventura's agriculture industry reportedly suffered some $171 million in losses due to the fire.

The Cedar Fire (San Diego Co.) was a massive wildfire that burned 273,246 acres (1,106 km2) of land in San Diego County, California, throughout October and November 2003, killing 15 people, including a firefighter.
The blaze had been powered by the Santa Ana winds, fanning the flames to a speed of 3,600 acres (15 km2) per hour.

The conflagration was contained on 4 November. Within the perimeter of the fire, lingering hotspots persisted until 5 December 2003. According to CALFIRE, the blaze caused just over $1.3 billion in damages.

The Rush Fire (Lassen Co.) was the largest wildfire of the 2012 California wildfire season.

It ignited in Lassen County, California, and swept into Washoe County, Nevada, to consume a total of 315,577 acres (1,277 km2) of sagebrush, thus destroying the natural habitat of the greater sage-grouse.

The Rim Fire (Tuolumne Co.) ignited on 17 August 2013 in a canyon in Stanislaus National Forest, California.
The blaze swept across a section of the central Sierra Nevada that embraces Tuolumne and Mariposa counties; it was caused by a hunter's illegal fire that got out of control, and was named for its proximity to the Rim of the World vista point. The overlook on Highway 120 leads up to Yosemite Park. The fire devastated 257,310 acres (1,041 km2).

Ingredients of a Blaze

As to why California’s wildfires have been so catastrophic, experts have suggest a number of possible ingredients.

Firstly, the region’s climate has always been fire-prone.

This is further compounded by the fact that autumn brings with it the strong gusts known as the Santa Ana winds. These funnel dry air from the Great Basin area of the West into Southern California.
A changing climate is also believed to be impacting the environment, with its recorded tendency to make dry places even drier.

“Behind the scenes of all of this, you’ve got temperatures that are about 2 to 3 degrees Fahrenheit warmer now than they would’ve been without global warming,” Park Williams, a bioclimatologist at Columbia University’s Lamont-Doherty Earth Observatory, was cited as saying by the New York Times.

At times, a fire is triggered by nature, like a lightning strike, but often the blazes are human-caused.

Some, like the 2018 Carr Fire, the state’s sixth-largest on record, started when a truck blew out its tire and its rim scraped the pavement, sending out sparks. Others are known to have been set off by downed power lines.
Fire suppression has also been dubbed a controversial strategy that might add to the spike in blazes.

The policy lets dead and decaying plant matter build up, increasing the risk for a larger and even more severe fire, claim those criticizing this approach.