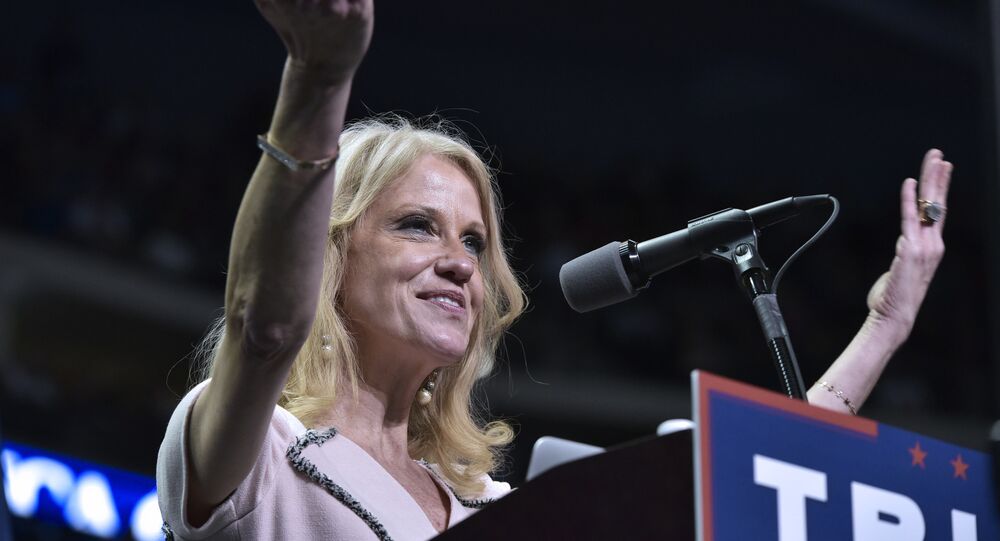 Kellyanne Conway, who is set to address the Republican Convention this week, served as Donald Trump’s campaign manager in 2016, becoming the first woman to manage a triumphant presidential campaign.

White House counselor Kellyanne Conway has announced she will be leaving the administration at the end of the month, informing the president of her decision on Sunday evening in the Oval Office, reports CBS News.

One of President Donald Trump's closest advisers, Conway issued a statement on 23 August, on the eve of the Republican National Convention, citing the need to focus on her family as the reason for her departure.

“I will be transitioning from the White House at the end of this month. This is completely my choice and my voice. In time, I will announce future plans. For now, and for my beloved children, it will be less drama, more mama,” reads the statement posted on social media.

Kellyanne Conway confirms she’s leaving the White House at the end of the month to focus more on her family. In a statement, @KellyannePolls writes: “for now, and for my beloved children, it will be less drama, more mama.” pic.twitter.com/lu9MEzQEft

​Conway, who served as Trump’s president's third campaign manager in 2016, after Corey Lewandowski and Paul Manafort, intimated that the looming challenges of distance learning for her four children in autumn during the coronavirus pandemic would require her full attention.

“Our four children are teens and tweens starting a new academic year, in middle school and high school, remotely from home for at least a few months… As millions of parents nationwide know, kids ‘doing school from home’ require a level of attention and vigilance that is as unusual as these times,” she said.

The White House counsellor, who has endured several rounds of staff turnovers, stopped short of revealing her future plans, underscoring that an announcement would be made "in time".

A trailblazer in her role, Conway was the first woman to successfully navigate a White House bid, proceeding to take on the role of senior counsellor to the US president.

“Heady” and “humbling” were the words Conway used to describe her tenure with the administration and, previously, with the 2016 presidential campaign, where she originally supported Senator Ted Cruz in the Republican primary. She subsequently moved over to the Trump campaign and that August became campaign manager.

Prior to that, Conway worked as a Republican pollster and operative for a number of years.

Echoing his wife’s statement, George Conway has also announced he is stepping down from his role at the Lincoln Project, a political action committee formed in late 2019 tasked with preventing the reelection of Donald Trump in the 2020 poll.

So I’m withdrawing from @ProjectLincoln to devote more time to family matters. And I’ll be taking a Twitter hiatus.

Needless to say, I continue to support the Lincoln Project and its mission. Passionately.

​Lawyer George Conway, a vocal critic of the US president, was labelled by Donald Trump as a “whack job” and a “husband from hell” in a “Fox & Friends” interview in November 2019. In turn, Conway declared the current White House incumbent a “pathological liar”, and "mentally unfit for his office".