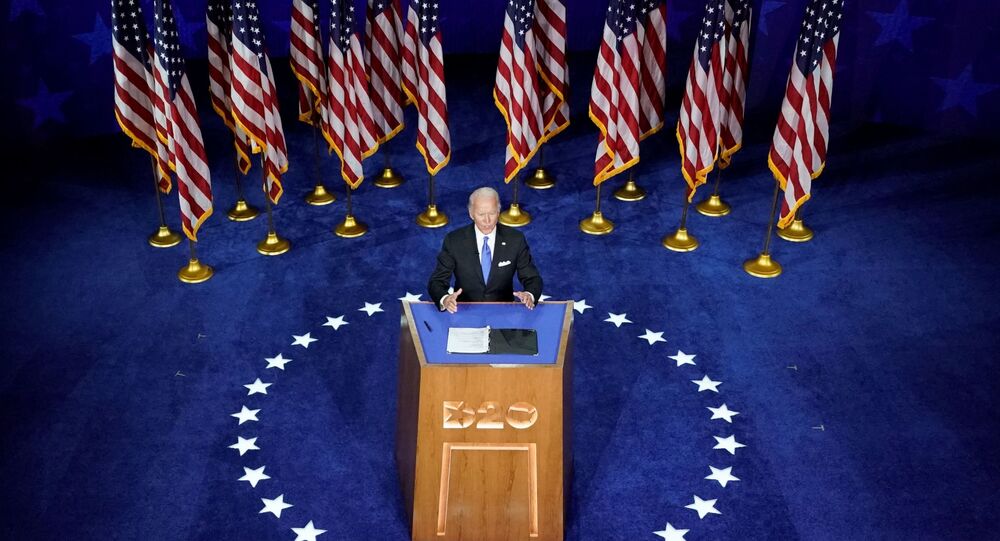 On Wednesday, Senator Kamala Harris formally accepted the nomination to be Democratic presidential hopeful Joe Biden's running mate during day three of the party’s national convention. She will become the first woman in US history to be vice president if the Biden ticket prevails in the November election.

Joe Biden formally accepted the Democratic Party's nomination for president of the United States in a big speech wrapping up the party's four-night virtual national convention that was nominally held in Milwaukee, Wisconsin.

"Here and now, I give you my word: If you entrust me with the presidency, I will draw on the best of us, not the worst. I will be an ally of the light, not of the darkness. It's time for us, for we the people, to come together", Biden said.

He added that it's time to end this "season of darkness", pledging to implement a national strategy to contain the COVID-19 pandemic. The Democratic presidential nominee attacked the current administration and spoke about how the US can rebuild after the COVID-19 crisis.

© REUTERS / KEVIN LAMARQUE
Democratic presidential candidate and former Vice President Joe Biden and his wife Jill Biden celebrate in front of fireworks after Joe Biden accepted the 2020 Democratic presidential nomination during the 4th and final night of the 2020 Democratic National Convention, as participants from across the country are hosted over video links from the originally planned site of the convention in Milwaukee, Wisconsin, U.S. August 20, 2020

Biden pointed out that his presidency would underscore "hope over fear, facts over fiction, fairness over privilege".

He pledged to "protect America […] from every attack, seen and unseen, without exception, every time".

They praised him as strong, caring, and a best friend, saying that "he'll be a great president".

Billionaire and former New York City Mayor Mike Bloomberg criticised President Donald Trump during the final night of the gathering, claiming that the president's notion that he is a good businessman holds no water.

"He drove his companies into bankruptcy six times — always leaving behind customers and contractors who were cheated and swindled and stopped doing business with him", Bloomberg argued,

He pointed to the stark contrast between Biden and Trump, saying the "two people running for president couldn't be more different; one believes in facts, the other does not".

"Why the hell would we ever rehire Donald Trump for another 4 years?", Bloomberg queried, claiming that POTUS "has failed the American people, catastrophically".

Also praising Biden on day four of the convention was Pete Buttigieg, former mayor of South Bend, Indiana and ex-candidate for the Democratic nomination in the 2020 election. An openly gay man, Buttigieg underlined the fact that Biden supported marriage equality before most in his party did so.

"Love makes my marriage real, but political courage made it possible — including that of Joe Biden, who stepped out ahead of even this party when he said that marriage equality should be the law of the land", the ex-mayor said.

He was echoed by two other former presidential candidates Cory Booker and Andrew Yang who also extended their support to Biden. "We are in a deep dark hole and we need leaders who will help us dig out", Yang, for his part said, said.

A similar tone was struck by Ed Good, a 95-year-old veteran of World War II and the Korean War, who told the convention that he has been a Republican since the 1960s but that he has now decided to endorse Biden for the presidency.

"I think Trump has been the worst president we've ever had, so I'll be glad to see him go", he said.

© REUTERS / Gabriela Bhaskar/Pool
Top Moments and Highlights From Day 2 of the Democratic National Convention
Thirteen-year-old Brayden Harrington, in turn, addressed the convention to tell a story of how Biden helped him to cope with a stutter, teaching the boy the methods that the Democratic presidential hopeful used to overcome his own speaking problems.

"I'm just a regular kid, and in a short amount of time […], Joe Biden made me more confident about something that's bothered me my whole life. Joe Biden cared", Harrington said.

Who Is Jill Biden? From Teacher-Turned-Second Lady to Potential First One