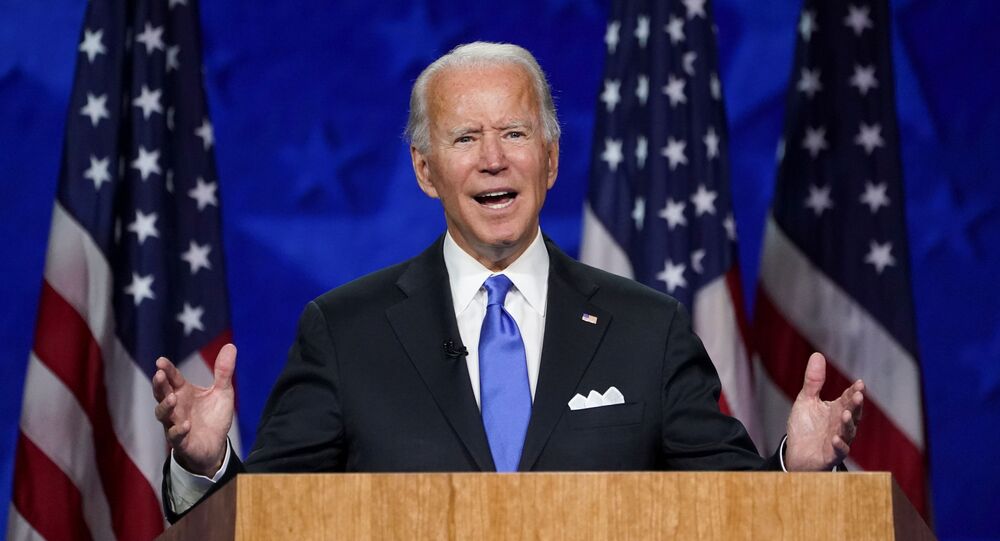 WASHINGTON (Sputnik) - Joe Biden formally accepted the Democratic Party's nomination for president of the United States and vowed to implement a national strategy for containing the novel coronavirus (COVID-19) pandemic on day one.

"I'll be proud to carry the banner of our party into the general election. So it is with great honor and humility [that] I accept this nomination for president of the United States", Biden said on Thursday in a livestream from Delaware.

Biden added that it is time to end this "season of darkness" and vowed to implement a national strategy to contain the COVID-19 pandemic.

The Democratic presidential nominee attacked the current administration and spoke about how the United States can rebuild after the COVID-19 crisis.

Biden claimed that if President Donald Trump remains in office the number of COVID-19 cases and deaths in the United States will remain high, small businesses will permanently close, and working families will continue to struggle.

Biden also took aim at China, vowing to ensure that US supply chains will not rely on the country.

Biden said he believes this generation is ready to take on the challenge of ending racism.

Biden said that he will not "put up with foreign interference" in the US voting, which he called the country's "most sacred democratic exercise", adding that he will always "stand for our values of human rights and dignity".

Biden promised to tackle climate change and to use it as an opportunity to lead the world in clean energy and to create new jobs.

On Tuesday night, he officially won the Democratic Party's presidential nomination, with 3,558 delegates voting for him by roll call.

On Wednesday, Senator Kamala Harris accepted the nomination to be Biden's running mate. Harris is a former California attorney general who dropped out of the primary race early on. She would become the first woman in US history to be vice president if the Biden ticket prevails in November.

Biden’s speech wrapped up a 4-night virtual national convention that was nominally held in Milwaukee, Wisconsin.

Trump in a tweet during the speech said “in 47 years, Joe did none of the things of which he now speaks. He will never change, just words!”

In 47 years, Joe did none of the things of which he now speaks. He will never change, just words!

The Republican National Convention is scheduled to take place 24-27 August at Charlotte, North Carolina. Trump said he would deliver his acceptance speech from the White House lawn.