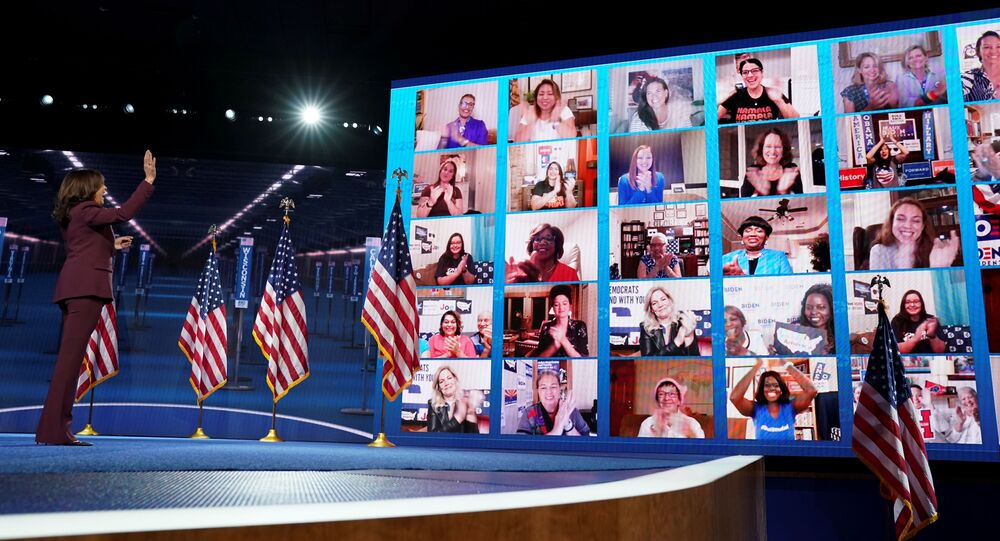 The 2020 Democratic National Convention will come to a close in Milwaukee, Wisconsin later on Thursday, when Joe Biden formally accepts the party's nomination to compete with incumbent Donald Trump in the 3 November presidential election.

Here are the main highlights pertaining to day three of the all-virtual gathering.

Senator Kamala Harris was officially nominated for vice president by the Democrats on Wednesday, which means that she may become the first female vice president in US history if the Biden ticket prevails over President Donald Trump in the November election.

"I accept your nomination for vice president of the United States of America. I do so committed to the values she taught me. To the word that teaches me to walk by faith and not by sight. And to a vision cast by generations of Americans — one that Joe Biden shares", Harris said in a keynote speech.

She also praised Biden's vision for the nation, adding that "Donald Trump's failure of leadership has cost lives and livelihoods".

Trump’s failure of leadership has cost lives and livelihoods. pic.twitter.com/PbGiMqKIz7

Harris voiced hope that if elected, Biden would become "a president who turns our challenges into purpose" in contrast to Trump who she claimed "turns our tragedies into political weapons".

The senator was echoed by former US President Barack Obama who berated POTUS for failing to take his current job seriously and realise the weight of responsibilities in the Oval Office.

"Donald Trump hasn't grown into the job because he can't. And the consequences of that failure are severe. 170,000 Americans dead. Millions of jobs gone. Our worst impulses unleashed, our proud reputation around the world badly diminished, and our democratic institutions threatened like never before", Obama argued.

He blamed Trump for turning the presidency into a reality show in order "to get the attention he craves".

Separately, Obama gave kudos to Biden, saying that "for eight years, Joe was the last one in the room whenever I faced a big decision".

"He made me a better president – and he's got the character and the experience to make us a better country", the former US president pointed out, adding that "any chance of success depends entirely on the outcome of" the 3 November election.

The same tone was struck by House Speaker Nancy Pelosi who criticised Trump and sought to persuade female voters to support Biden during her speech at the Democratic National Convention.

"As Speaker, I've seen firsthand Donald Trump's disrespect for facts, for working families, and for women in particular – disrespect written into his policies toward our health and our rights, not just his conduct.  But we know what he doesn't: that when women succeed, America succeeds", Pelosi asserted.

She praised Biden as a person who has the faith and the determination to be at the helm of the US and who "has never forgotten who he is fighting for".

Hillary Clinton in her convention speech underlined the importance of getting Biden into the Oval Office, and praised the Democratic presidential nominee for picking "the right partner in Kamala [Harris]".

"There's a lot of heartbreak in America right now — and the truth is, many things were broken before the [COVID-19] pandemic. Joe Biden knows how to heal, unify, and lead, because he's done all of that for his family and his country", she stated.

Concerning POTUS, the 2016 Democratic presidential nominee said that she wished "Donald Trump had been a better president but, sadly, he is who he is".

“For four years, people have said to me, 'I didn’t realize how dangerous he was. I wish I could go back and do it over.' Or worst, 'I should have voted.' Well, this can’t be another woulda coulda shoulda election. If you vote by mail, request your ballot now, and send it back as soon as you can. If you vote in person, do it early. Bring a friend and wear a mask. Become a poll worker. Most of all, no matter what, vote. Vote like our lives and livelihoods are on the line, because they are", Clinton said.

Billie Eilish Calls to Back Biden

In a separate development on Day 3 of the convention, Grammy award-winning singer Billie Eilish performed the song "My future" at the gathering and urged Americans to cast their ballots in favour of Biden on 3 November.

.@billieeilish is 100% right – we can't sit this one out.https://t.co/OWc0zxtWBy#DemConvention pic.twitter.com/KGmjfEqead

She accused President Trump of "destroying our country and everything we care about", adding that America needs "leaders who will solve problems like climate change and COVID, not deny them".

"Leaders who will fight against systemic racism and inequality, and that starts by voting for someone who understands how much is at stake, someone who is building a team that shares our values. It starts with voting against Donald Trump and for Joe Biden", Eilish said.

As Joe Biden Gets Democrat Nomination, What Will Be 2020’s Key Swing States?