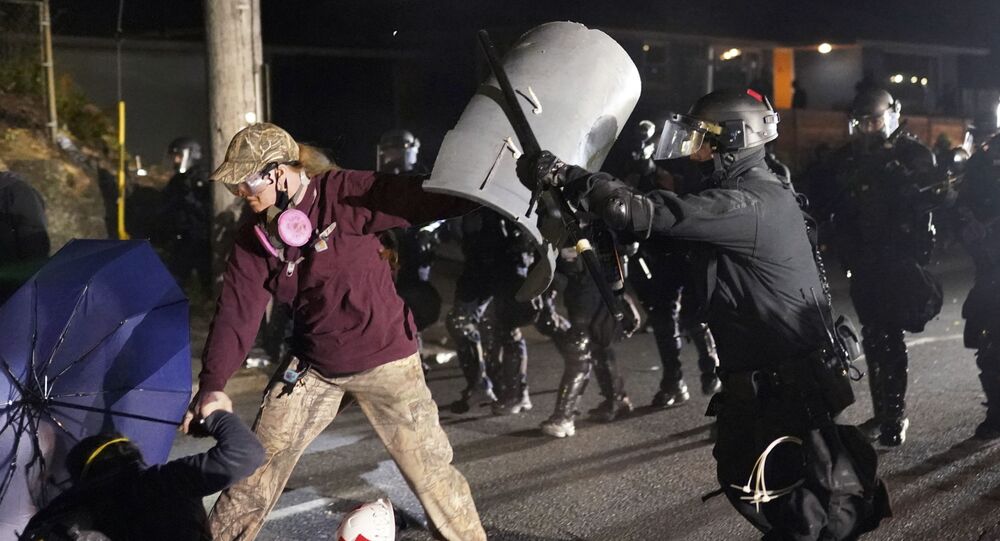 MOSCOW (Sputnik) - The Sheriff's Office of the US Oregon state's Multnomah County said on Wednesday that the Portland Police have declared a riot at an anti-racism protest near the Multnomah County Building after the building was vandalised.

"@PortlandPolice has declared the gathering near the Multnomah Building a riot after individuals vandalized, repeatedly smashed first floor windows with rocks and threw burning material into an office", the office wrote on Twitter.

Local media reported that protesters gathered in Colonel Summers Park on Tuesday evening, marking the 83rd consecutive night of rallies in Portland, to march to the Multnomah County Building.

Police have declared a riot outside of the Multnomah County building during the 83rd night of protests in Portland. #SiriuXM115 pic.twitter.com/9T1gUkFeT5

​The march was peaceful for about an hour, but after protesters arrived at the destination, they started to lit fires in dumpsters and brake windows.

Antifa smash out windows of the Multnomah Building in Portland tonight and throw lit materials inside to set the ground floor on fire. They did this to multiple other buildings over the course of their 80+ days of terror in the city. #PortlandRiots pic.twitter.com/2Q2zO7GVDU

​Protests against police brutality and racism have erupted in Portland and other US cities after the death of African American man George Floyd in police custody on 25 May. The Portland protests have since evolved into a nightly battle against the federal forces that President Donald Trump deployed to the city despite the objections of state and local officials.