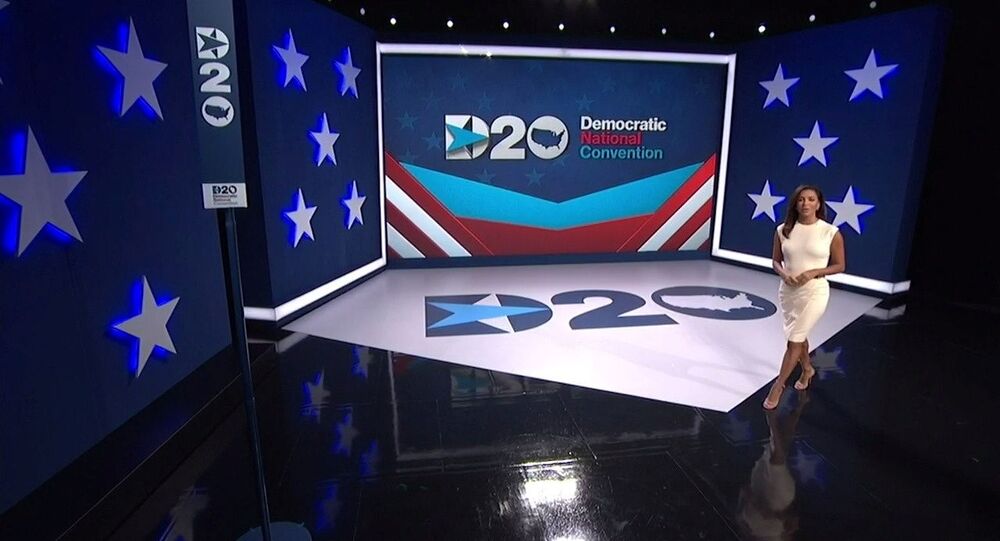 Key Takeaways From Day One of 2020 Democratic National Convention

Held for the first time in a predominantly virtual format, the Democrats kicked off their national convention on Monday evening, poised to officially nominate 77-year-old former Vice President Joe Biden and his running mate Kamala Harris – the first woman of colour on a major party's presidential ticket.

The four-day Democratic National Convention kicked off on 17 August, held in the form of online meetings, speeches, and events due to the COVID-19 pandemic, with Democratic National Committee Chairman Tom Perez working from Milwaukee, Wisconsin, where the convention was originally scheduled to take place in mid-July.

© REUTERS / BRIAN SNYDER
A sign advertises the Democratic National Convention (DNC), which will be a largely virtual event due to the coronavirus disease (COVID-19) outbreak, in Milwaukee, Wisconsin, U.S., August 16, 2020

The headliners of the event are Joe Biden, who will formally accept the party’s nomination to run for president in the November election, and Kamala Harris, the first black woman to run for vice president on a major party ticket.

The Democratic National Convention opened its virtual doors to a handful of Republicans who showed up and spoke out in support of Joe Biden. pic.twitter.com/jsou0giFsM

​The first night of the Democratic convention saw live and pre-recorded speeches from across the country stating the case against current White House occupant Donald Trump on a spate of issues, while seeking to cement a broad coalition of supporters for Joe Biden.

Unfolding in a novel COVID-conscious setup, with actress Eva Longoria serving as an emcee throughout the proceedings, the coronavirus pandemic remained a major focus of attention.

New York Gov. Andrew Cuomo, whose state was an early epicentre of the pandemic, slammed the current administration's failure to contain the virus.

"COVID is the symptom, not the illness", said Cuomo, adding that the nation was in crisis, and over the past few years America's body politic had been weakened, with deepening divisions.

While the problems didn't begin with President Donald Trump,  said Cuomo, the "divisions created him", and he "only made it worse".

​Following the governor's speech, Kristin Urquiza, a woman who lost her father to COVID-19, shared her story and condemned Trump's virus response.

"Donald Trump may not have caused the coronavirus, but his dishonesty and his irresponsible actions made it so much worse… And so, when I cast my vote for Joe Biden, I will do it for my dad", she said.

"My dad was a healthy 65-year-old. His only pre-existing condition was trusting Donald Trump, and for that, he paid with his life". Enough is enough#DemocraticConvention pic.twitter.com/jV7fjj6MV7

The opening hour of the convention was punctuated by references to issues of racial justice and policing, citing disproportionate numbers of African Americans killed by police annually, and the protests that had swept the nation.

George Floyd's brother Philonise Floyd leads a moment of silence at the Democratic National Convention in memory of Black Americans who have been killed by law enforcement:

"And when this moment ends, let's make sure we never stop saying their names". pic.twitter.com/iSIZeB76H1

​A moment of silence led by his two brothers was held for George Floyd, the man who died after being pinned by the neck by a Minneapolis police officer.

"Most cops are good, but the fact is that the bad ones have to be identified and prosecuted and out — period", said Biden.

Former First Lady Michelle Obama presented a convention speech punctuated by the pithy line: "It is what it is".

The remark summed up her personal scathing assessment of Donald Trump's presidency, as she sought to carry across the message that he was "the wrong man for the wrong time".

"He cannot meet this moment. He simply cannot be who we need him to be for us", said Obama.

Michelle Obama hailed Biden as a "terrific vice president" during his eight years under her husband Barack Obama.

The one point Michelle Obama wants you to take home from her 2020 Democratic National Convention address pic.twitter.com/YUUhm4XvZV

​Urging Americans to vote for Joe Biden, Michelle Obama made the searing appeal:

"If you think things cannot possibly get worse, trust me, they can… and they will if we don't make a change in this election. If we have any hope of ending this chaos, we have got to vote for Joe Biden like our lives depend on it".

Several Republicans made their case for backing Joe Biden, led by former Ohio Gov. John Kasich, as they argued that Donald Trump was a "disappointing" and "disturbing" failure.

"I'm proud of my Republican heritage… But what I have witnessed these past four years belies those principles".

Vermont Senator Bernie Sanders sought to drum up support for former primary rival Joe Biden among his own followers.

"This election is the most important in the modern history of this country" — Sen. Bernie Sanders addresses the Democratic National Convention pic.twitter.com/DoPtfRglut

"If Donald Trump gets re-elected, all the progress we have made will be in jeopardy", Sanders said, adding:

Day One of US Democratic Party Virtual Convention - Video