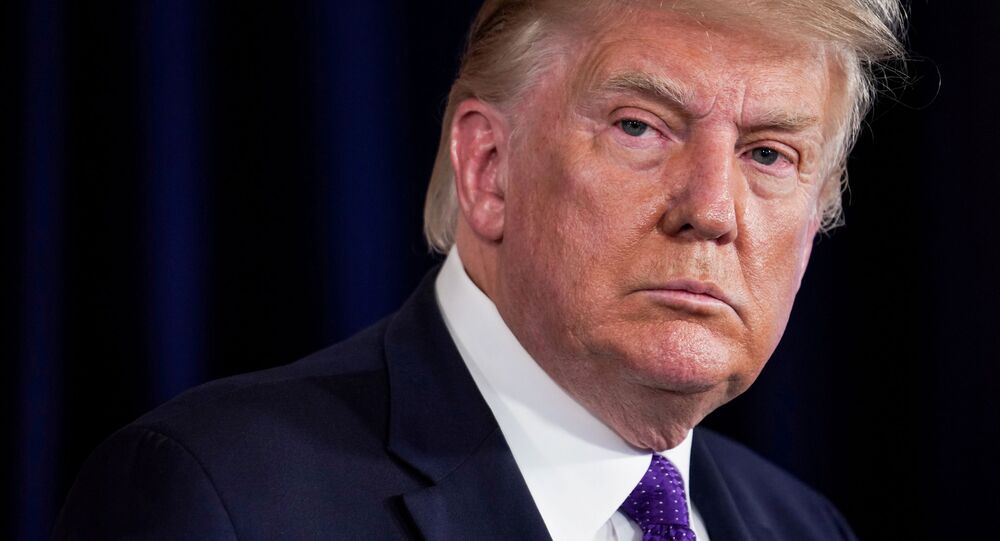 With the coronavirus (COVID-19) pandemic ravaging the United States, election officials have encouraged casting votes via mail-in ballots to avoid the risks of in-person voting in the November election. Sitting President Donald Trump has railed for months against the practice, claiming that it could lead to "fraud".

Voters in the US state of North Carolina have been "shocked" by receiving absentee ballot request forms in the mail with the face of President Donald Trump on them, CNN reported on Sunday.

According to photos of the documents shared on social media, the forms featured Trump's face along with one of his tweets endorsing absentee ballots.

"Are you going to let the Democrats silence you? Act now to stand with President Trump", the mailer read. "President Trump is counting on you".

John Herter, a resident of Lincoln County, North Carolina, told CNN that his wife responded wondering, "Is this a joke?" after she opened the surprising form.

Can Trump get away with violating campaign rules in North Carolina? He has his propaganda attached to a North Carolina mail in voting ballet request. pic.twitter.com/c7Ym9k0SZz

"The irony is very thick and definitely not lost on me", said Chandler Carranza, a resident of Gaston County, as quoted by the outlet. "Trump has been saying mail-in ballots will bring fraud to the election but absentee ballots are legit. Which is it? It can't be both ways. I laughed because if the campaign actually took information from other times they have reached out to me, they'd know I won't vote for Trump despite being a registered Republican".

Got my mail in absentee ballot request form from @realDonaldTrump that will allow me to mail in my vote if I need to... but I can't remember if this is a good thing or bad thing. Mail in is bad but absentee is good??? 🙄🙄🙄 pic.twitter.com/fbdgiq4hwc

While Trump is railing against vote by mail, his campaign sends out absentee ballot request forms here in NC. (Something he complained about that governments in some states were doing) pic.twitter.com/48TIBRgVog

Former US Secretary of Labour Robert Reich was among those wondering about the Trump campaign sending absentee ballot request forms to North Carolinians despite the president's view on voting by mail.

"While Trump and his enablers rail against vote by mail, they are encouraging their own supporters to do just that", Reich, who served under US Presidents Gerald Ford, Jimmy Carter, and Bill Clinton, tweeted on Sunday. "Their hypocrisy knows no bounds".

While Trump and his enablers rail against vote by mail, they are encouraging their own supporters to do just that.

Their hypocrisy knows no bounds. pic.twitter.com/8I7g5vVapI

Deputy national press secretary for the Trump campaign Thea McDonald defended the campaign's behaviour, saying the mailer shows how it "is working to ensure voters in every state know how their state's sorting system works so that every eligible voter can cast their ballot and have their vote counted".

"President Trump has consistently and rightly said that where a voter cannot make it to the polls, they should request an absentee ballot", McDonald said, as cited by CNN. "The president has also correctly distinguished between chaos-ridden universal mail-in voting systems, like the one that led to California's train wreck primary, and traditional absentee mail voting systems, like the tried and true system in North Carolina - a distinction Democrats and many in the mainstream media purposely ignore to sow confusion".

North Carolina GOP press secretary Tim Wigginton told the outlet that the mailer was sent out by the party in order to "to make it easier for interested voters to participate".

"We want our voters to know they can utilise this tool to cast their ballot in an easy, safe, and secure manner. It is important to note that the North Carolina system requires a voter to actively solicit a ballot and go through an easy but important verification process to request a ballot", Wigginton added. "We along with President Trump oppose an all-mail election process where voters are mailed ballots without a prior request and authentication".

President Trump and officials in his re-election campaign have been railing against voting by mail for months, with the president claiming that mail-in ballots could lead to election "fraud".

On Friday, given the financial troubles facing the US Postal Service ahead of the November vote due to the COVID-19 pandemic, Trump offered to approve $25 billion in funding for the USPS, requested by Democrats as part of an upcoming federal coronavirus relief package, but only if the Democrats agree to unspecified White House priorities.

"Sure, if they gave us what we want. And it's not what I want, it's what the American people want", the president suggested during a Friday news conference.

US to Lobby Allies to Deploy Midrange Missiles in Asia Against China, Trump’s Envoy Says