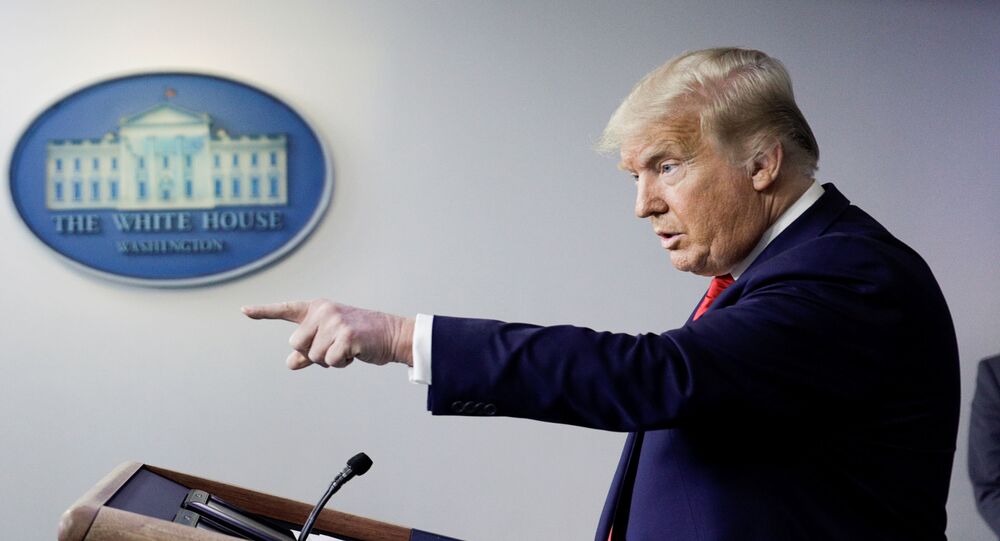 Trump Goes Off on Fox News, Says It's ‘Worse Than Fake News CNN’ on Weekend Afternoons

The precise cause of the US president’s criticism remains unclear, although he is known to have an adversarial relationship with Fox News Sunday host Chris Wallace, who attacked the Trump campaign in his Sunday afternoon program over its alleged birther-style attacks against recently chosen Biden running mate Kamala Harris.

President Donald Trump took to Twitter Sunday to attack Fox News’ weekend afternoon content, calling it “worse than Fake News @CNN” and recommending that followers ‘turn their dial’ to @OANN,” a network he has repeatedly praised in the past, instead.

“They do a really ‘Fair & Balanced’ job!’ Trump suggested.

.@FoxNews is not watchable during weekend afternoons. It is worse than Fake News @CNN. I strongly suggest turning your dial to @OANN. They do a really “Fair & Balanced” job!

The president’s comments came immediately after Chris Wallace grilled Trump campaign advisor Steve Cortes on his Sunday afternoon program over the administration’s alleged use of ‘birther’-style tactics similar to those Trump used against Barack Obama in 2008 to question whether Kamala Harris is eligible to become president.

“Does the Trump campaign, does President Trump acknowledge that Kamala Harris is eligible to be the next vice president of the United States?” Wallace asked.

“Yes. He made this very clear in his press conference yesterday. He said this is not an issue that we are pursuing,” Cortes said.

“On the other hand he didn’t strike down the claim, and I’m asking about that because he once again yesterday was offered to dismiss the false claim that because her parents were immigrants that she is not eligible to run even though she was born in the state of California,” Wallace retorted.

“Isn’t this just like the birther claims that the president made against Barack Obama? Nothing could be easier than to say ‘it’s a false claim, she is eligible’…Why not just say ‘it’s wrong, it’s false’?” the Fox News host added.

Cortes responded by suggesting that the media seem to be “trying to create a controversy that simply doesn’t exist.”

Over the past several days, Democrat-leaning media have accused the Trump campaign of pursuing a ‘birther’ conspiracy theory against Harris. Trump said he had “no idea” whether the claims made against Harris were correct, but said he “would have assumed that the Democrats would have checked that out before she gets chosen to run for vice president.”

Trump’s latest attack on Fox News follows multiple instances of similar criticism of the conservative news network in recent months, with the president previously accusing Fox of “doing nothing” to help Republicans get reelected in 2020, and saying he was “not happy” with the network seeking to “be politically correct all of a sudden.” In April, he accused the network of being “fed Democrat talking points” over his administration’s coronavirus response.