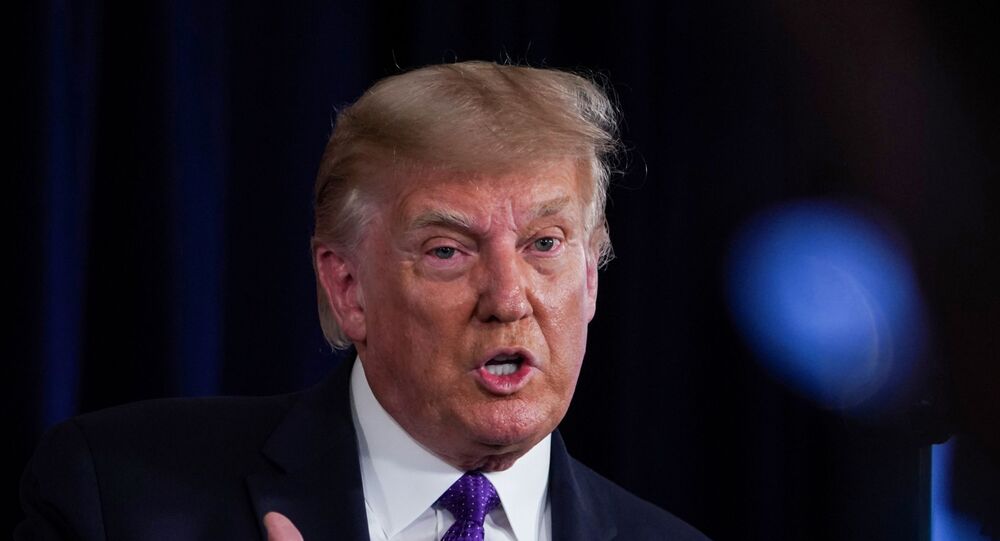 Earlier, the Trump administration voiced its opposition to the UN Security Council rejection to extend an arms embargo against Iran. Despite the UNSC decision, Washington asserted that it would stick to its promise to "stop at nothing" to prevent Iran from buying and selling weapons on the international market.

US President Donald Trump stated during a press conference Saturday that the United States "will be doing a snapback" of a sanctions mechanism against Iran, after the UN Security Council rejected an extension to the US arms embargo on the country.

Answering a question "When will you trigger a snapback of sanctions on Iran?", Trump said: "Well, we knew what the vote was going to be, but we'll be doing a snapback. You'll be watching it next week".

The "snapback mechanism," referred to by Trump is a dispute-solving mechanism provided for in the 2015 Joint Comprehensive Plan of Action (JCPOA). It envisaged reimposing penalties on Iran in case it violated the nuclear commitments under the deal and if the concerns raised by a signatory were not resolved in 30 days by a dispute-resolution panel.

Since the so-called snapback was envisaged in the JCPOA, which Trump unilaterally exited in 2018, many experts believe that the White House cannot use the mechanism.

Trump on Putin's Suggestion of Summit on Iran

Trump was also asked whether he would participate in a video summit on Iran proposed by Russian President Vladimir Putin, to which he said "Probably not. I think we would wait until after the election".

The Russian president offered his initiative on Friday, suggesting "an online meeting of the heads of states that are permanent members of the UN Security Council as well as leaders of Germany and Iran as soon as possible". According to Putin, the goal of the online summit would be to "avoid confrontation, escalation in the UNSC".

"We suggest using the leaders' meeting to agree to the parameters of a joint work on forming reliable mechanisms of building trust and ensuring security in the Persian Gulf," Putin said in offering the summit.

The Russia leader's suggestion came shortly after the UN Security Council refused to adopt as US resolution on the extension of the embargo against Tehran, resulting condemnation from the Trump administration. The White House reiterated its commitment to "stop at nothing" to prevent Tehran from purchasing or selling weapons on the international market, claiming that the UN decision was a "mistake" that would lead to "major conflict".

The arms embargo against Iran is set to expire 18 October under the terms of the 2015 Joint Comprehensive Plan of Action (JCPOA) - an agreement also known as the Iran nuclear deal, signed between Iran, the United States, China, France, Russia, Germany, the United Kingdom, and the European Union.

In 2018, Trump reimposed US sanctions on Tehran after unilaterally leaving the agreement, causing Tehran to step away from the JCPOA commitment to scale back its nuclear program in exchange for sanction relief.