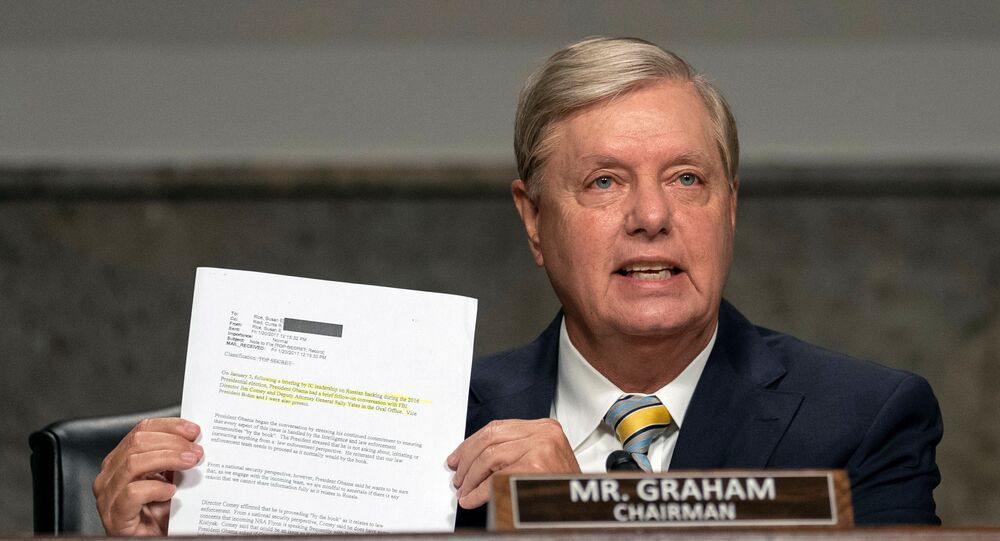 The US resolution, envisaging an extension of an arms embargo against Iran, was rejected by the UN Security Council, drawing disappointment from Washington, as the Trump administration claimed that it would nonetheless continue its attempts to prevent Iran from buying and selling weapons on the international market.

US Republican Senator Lindsey Graham denounced the UN Security Council rejection of an extension of the Iran arms embargo, saying that the UN made a "major mistake".

He also asserted that the failure to extend the embargo "makes a major conflict with Iran much more likely".

"The United Nations Security Council overwhelmingly rejected an extension of the Iranian arms embargo. This was a major mistake by the UN. It also makes a major conflict with Iran much more likely as they build up their military arsenal", Graham tweeted Saturday.

Iran is still the largest state sponsor of terrorism in the world.

As the Iranian military grows, it sets a collision course with Israel and others threatened by the Iranian regime.

A stupid decision by the UN.

The resolution aiming at extending the arms embargo against Tehran - set to expire in October - was rejected by the UNSC on Friday with only two supportive votes, drawing condemnation from Washington, as the Trump administration maintained its promise to "stop at nothing" to keep the embargo in place.

October will mark the end of the embargo, which expires under the terms of the 2015 Joint Comprehensive Plan of Action (JCPOA) that envisaged Iran scaling down its nuclear program in exchange for sanctions relief. The Trump administration insists that the embargo be extended.

US Efforts to Extend Arms Embargo

The rejected US resolution suggested that parts of Resolution 2231, which established the JCPOA, continue until the UNSC cancels them. Among those, there were provisions that prohibited Iran from purchasing tanks, artillery systems, combat aircraft, missiles and other weapons without UNSC permission, and envisaged sanctions against those who bypassed the provisions.

Iran, Russia and China have opposed an indefinite embargo, as Russian Foreign Minister Sergey Lavrov outlined that the initial arms restrictions were put on Iran to ensure that the original JCPOA agreements are met, and there was never any intention to prolong them after October 2020.

Iranian Foreign Minister Mohammad Javad Zarif slammed efforts by the White House to extend the embargo, arguing that the Trump administration is "so desperate to show support for its struggle to illegally extend arms restrictions on Iran that it clings to the personal position of GCC SG — obtained thru coercion — as regional consensus".

US is so desperate to show support for its struggle to illegally extend arms restrictions on Iran that it clings to the personal position of GCC SG—obtained thru coercion—as regional consensus.

All knew that most in the region—even in GCC—do NOT subscribe to this.

In May 2018, the Trump administration unilaterally ended the participation of the United States in the JCPOA, resulting in Tehran stepping away from its nuclear commitments beginning in 2019.

Trump's withdrawal from the nuclear deal marked the re-imposing of harsh sanctions against Iran and a rise of tensions between the two nations.

Tensions were additionally fueled by the 3 January assassination of Islamic Revolutionary Guard Corps (IRGC) top general Qasem Soleimani, who was killed in a drone strike conducted on the order of US President Donald Trump.

The Soleimani killing prompted Iranian retaliation, with Tehran attacking US military bases in Iraq on 8 January. Initially, the White House said that no one was hurt after the attack, but later the Pentagon revealed that over a hundred soldiers had been diagnosed with traumatic brain injuries.

Throughout 2020, sanctions against Iran have been expanded by the Trump administration, despite global calls to lift them amid the coronavirus pandemic. In late July, US Secretary of State Mike Pompeo widened the list of sanctions against Tehran, targeting the country's nuclear, military and ballistic missile programs.