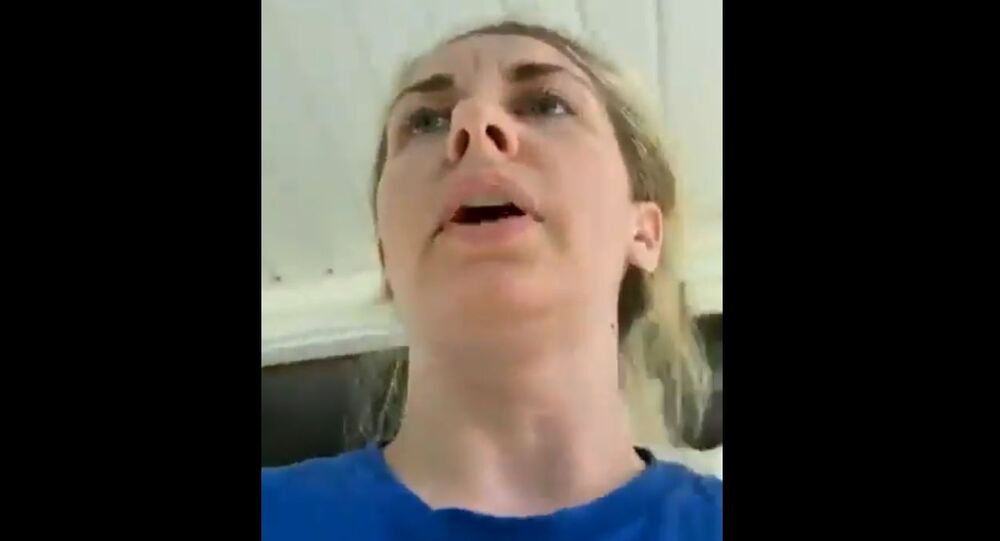 Millie Weaver, a conservative journalist from Infowars and a host of the MillennialMillie YouTube channel, was just about to reveal her investigation into the US “Shadow Gate” in her new documentary. However, those plans have now been put on hold.

Investigative journalist Millie Weaver, along with her husband, has been reportedly being taken into custody while accused of “burglary”, just as her documentary on the US intelligence apparatus, has premiered online, the Infowars website reported.

In a livestream video, taken by Weaver herself, and then shared on Twitter by Adan Salazar, her Infowars colleague, the reporter is heard asking a police officer outside of her house whether she has been “indicted” by a “grand jury”. She is then seen walking inside her premises as she says to the camera: “Guys, I don’t know what’s happening right now, police just showed up in my house and they said that they are arresting me”.

It then can be heard that she was taken into custody as charged with “burglary”.

“Please share this”, the reporter says in the end and the video ends abruptly.

The development happened as Weaver’s “Shadow Gate” investigative documentary exposing the “Deep State” operations of the US intelligence community based on the reports of two intelligence whistleblowers was about to premier online. The whole documentary is now available on YouTube, and it was also shared on Twitter by the now-suspended “Tore_Says” account, according to Google whistleblower Zach Vorhies. It’s not immediately clear whether it was Weaver who managed to release the film prior to her arrest in the end, or it was published by other users.

lnfowars' Millie Weaver has just been indicted by a Grand Jury and arrested for reporting on criminal activity 'allegedly stealing gov't documents'!

Right before she was about to release her documentary about shadow government and social media psychological warfare operations! https://t.co/Bdg57QNqNa

Some social media users and news outlets suggested that the journalist could have been arrested in relation to “unauthorized” access to some materials used in her doc. But some of them suggested that the arrest could have been staged to get publicity to Weaver’s film. Her father, Pastor Charlie Weaver, confirmed on Twitter that his daughter and her husband were arrested on Friday evening and “will most likely be stuck there until Monday morning”.

“Some are saying this was a staged event. If this were a staged event I know our children would not have been involved”, he added.

My daughter would never steal. She is honest and good. I am asking for vigilant violent prayer for her. #millieweaver

As a conservative news outlet, Infowars and its founder Alex Jones have been repeatedly attacked in the past over the website’s investigative reports. Twitter, YouTube, Facebook and other social media platforms have previously banned a number of Infowars-related figures.