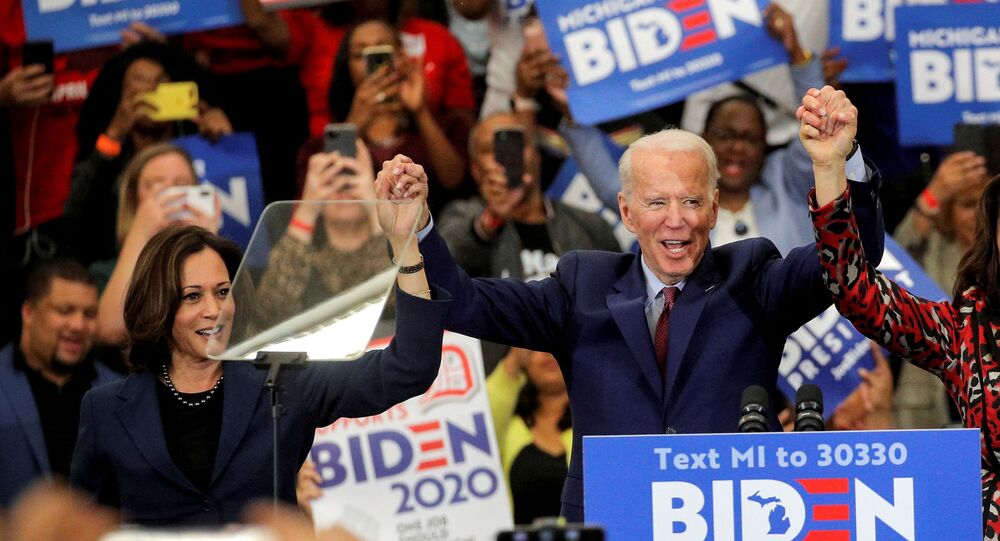 On 11 August, former Vice President and Democratic frontrunner Joe Biden announced that he had tapped Kamala Harris, a California senator of Jamaican-Indian descent, as his running mate. International observers have discussed Harris' strengths and weaknesses and weighed up what she may bring to Biden's ticket.

Joe Biden's decision to choose Kamala Harris has prompted a heated debate among American conservatives, who have stepped up their criticism of the Democratic presumptive nominee's pick.

The Trump 2020 campaign's senior adviser Katrina Pierson tweeted that Harris has become Biden's "political living will", warning that "taxes will increase, police funding will be cut, and borders will be open" if they win the Oval Office. Republican Senator Marsha Blackburn echoed Pierson by saying that the selection of Harris shows that "the Biden campaign is moving further left".

Kamala Harris will be the most liberal left wing nominee for Vice President our country has ever seen.

​For his part, Dr John C. Eastman, a Republican and Henry Salvatori professor of law, threw Harris' eligibility for the vice presidential office into question altogether in his op-ed for Newsweek.

Harris 'Didn't Click' With Voters During the Nomination Campaign

"Biden’s choice of Harris as his running mate wasn’t particularly surprising", says Timothy Hagle, a political science professor at the University of Iowa. "Among the handful of women who were apparently on his short list, she was the most prominent and well known".

Still, she is not the best choice for Biden, according to the political scientist. Having admitted that Harris' popularity may help to rally most of the Democrats’ base, he highlights that Biden's pick also has weaknesses, which became evident during her campaign for the nomination.

"Although she seemed to have a lot of potential when she began her presidential campaign, and the media loved her, she just didn’t click with voters and ended up dropping out even before the Iowa Caucuses", Hagle notes.

According to him, part of Harris' problem was that she "didn’t really have a reason for her campaign, other than to oppose Trump".

"Many Democrats think that’s enough, but it’s usually better to be something to attract the middle voters who will be deciding the races in most states", he says.

Apparently, she might do better while being a running mate and not the headliner, but she should measure her attacks against her opponents, including Vice President Mike Pence, and "take care to not come across as mean or spiteful", the professor elaborates.

He recollects that Harris tried to stand out during then-Judge Kavanaugh's 2018 Senate hearings, when he was nominated for the Supreme Court. While Harris' zealousness and aggressive questioning of the then-judge's sexual misconduct allegations resonated with the left, it did not as much with the "middle voters".

​“She was extraordinarily nasty to Kavanaugh", Trump said during an 11 August briefing. "She was nasty to a level that was just a horrible thing the way she was, the way she treated now-Justice Kavanaugh. And I won’t forget that soon".

Touching upon Harris' upcoming debate with Mike Pence, Hagle notes that her assertiveness may become a problem for Team Biden, given that although "Pence can be aggressive in his rhetoric he generally comes across as calm and knowledgeable".

"I don’t expect that Harris will be able to dominate a debate with Pence", the professor predicts. "Many in the media may declare her the victor unless she has a complete meltdown, but the tough questioning she exhibited during Senate hearings won’t be possible in a debate where Pence gets to respond".

What Exactly Can Harris Bring to Biden's Ticket?

While some suggest that it doesn’t really matter who the running mate is, this time it might play a role given the concerns about Biden's age, Timothy Hagle remarks: "There might be a greater than usual possibility that the vice president will have a more significant role in the administration should Biden win the presidency".

However, the professor expresses doubts about Harris' ability to increase Biden’s chances of winning.

"The selection of Harris as Biden’s running mate will only marginally impact the shape of the presidential contest", echoes Dr Rubrick Biegon, a lecturer in international relations at the University of Kent.

Being only slightly to the left of Biden ideologically, Harris is unlikely to excite the more left-wing elements of the Democratic Party, such as voters associated with Bernie Sanders, the runner-up to the nomination, he suggests. "At the same time, Harris won’t be as controversial with the left as someone like Susan Rice (Obama’s former national security adviser, who was also vetted for the VP spot) would have been", the lecturer adds.

At the same time, no one can guarantee that she will help boost the African-American turnout in the general election, since she did not garner a great deal of support from Black voters in the primary campaign, according to Biegon. Currently, older Black voters prefer Biden, and younger voters are drawn mainly to Sanders and Elizabeth Warren, he specifies.

"Turnout amongst African-Americans declined slightly in 2016 from Obama’s 2008 and 2012 campaigns", the scholar underscores. "Any increase in Black turnout in swing states will help Biden, but the symbolism of including a Black woman on the ticket is unlikely to be a game-changer in and of itself".

According to him, "progressives have nowhere else to go" given "the dangers of another four years of Trump" and will vote for Biden-Harris. "Therefore, Biden didn't have to give the Sanders wing of the party any concessions and he didn't", Blankenship elaborates.

"[Picking Harris] will increase his chances of winning because Harris is an excellent debater and has a ton of energy – something Biden is in desperate need of", the journalist believes. "I think that with Harris' prosecutorial experience showcased during various Senate hearings she will grill Mike Pence. This will likely help offset the fact that Trump is probably going to wipe the floor (so to speak) with Joe Biden on the debate stage".