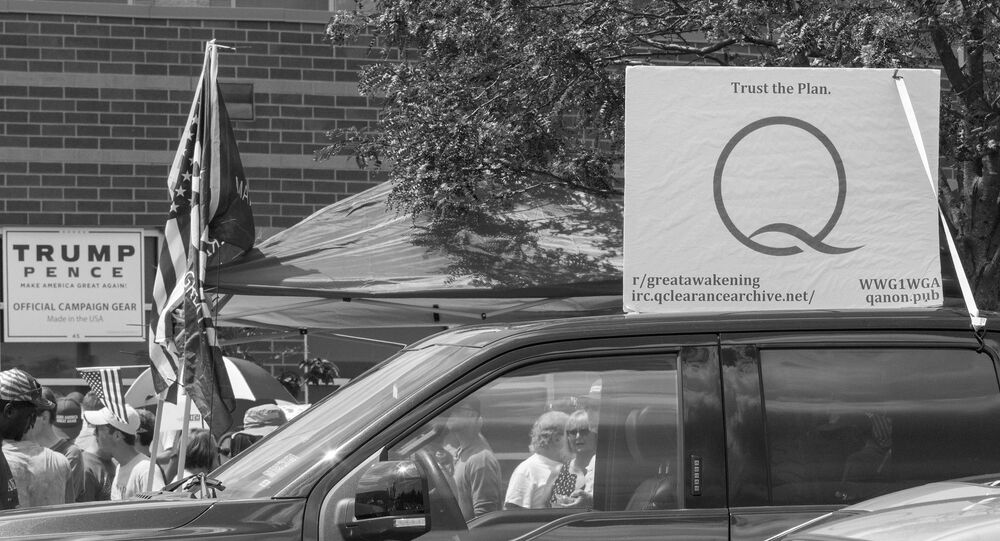 QAnon is a conspiracy theory suggesting that US President Donald Trump fights the so-called "deep state" plotting against him. The theory accused many Democratic prominent figures and Hollywood actors of participating in child sex trafficking.

A preliminary investigation by Facebook has suggested that there are "thousands of groups and pages with millions of members and followers that support the QAnon conspiracy theory", NBC reported, citing internal company documents.

The figures and scale of QAnon activity on Facebook were not previously disclosed by the social platform, as most of the groups are private. Now the top ten groups uncovered were reported to have collectively over a million members, with other 'top' pages purportedly pushing the number of followers past the 3 million mark.

Measures against conspiracy supporters have not been announced by Facebook, according to the report, which additionally noted that the social media giant is considering "an option similar to its handling of anti-vaccination content", indicating that it would reject advertising and exclude the word and phrase from searches and recommendations.

Facebook has reportedly been investigating the QAnon theorists since "at least June" as part of a larger look at "groups with potential ties to violence".

"Enforcing against QAnon on Facebook is not new: we consistently take action against accounts, Groups, and Pages tied to QAnon that break our rules. Just last week, we removed a large Group with QAnon affiliations for violating our content policies, and removed a network of accounts for violating our policies against coordinated inauthentic behavior. We have teams assessing our policies against QAnon and are currently exploring additional actions we can take", an unnamed Facebook spokesperson told NBC in an e-mail.

The spokesperson outlined that some members of Facebook's cross-departmental team who are working on the investigation shared concerns that the company might prefer "weaker enforcement actions" as opposed to an outright ban of QAnon-associated groups. The employee then said that they were discussing the possibility of the conspiracy theorists influencing the 2020 US presidential elections.

Joan Donovan, director of the Kennedy School’s Shorenstein Center on Media Politics and Public Policy at Harvard, named Facebook one aspect of the "base infrastructure" of the QAnon believers.

“Facebook is definitely the largest piece of the QAnon infrastructure,” Donovan said. “While people who have bought into these disinformation campaigns are already affected, preventing it from spreading to new groups and new audiences is one intervention, among many, that are needed. Unless there is some kind of coordination between platform companies to get rid of the main QAnon influencers, it will continuously pop back up.”

Earlier in July, Twitter deleted over 7,000 QAnon pages, banning the accounts due to rule violations. The social platform stressed that QAnon-associated content would be removed from trends, recommendations and searches.

The QAnon conspiracy, stemming from the so-called "pizzagate" theory that claimed Hillary Clinton to be the ruler of a pedophilia ring based in a pizzeria in Washington DC, claims that US President Donald Trump is secretly fighting a "deep state" that plans a coup d’état to remove him from office.

According to QAnon beliefs, this group, described as political, financial and Hollywood elites, also manages a child sex trafficking ring and worships Satan. The claims were earlier sparked by an anonymous Internet user using the nickname 'Q'. QAnon's actions are reported to have caused violence and murder in real life.