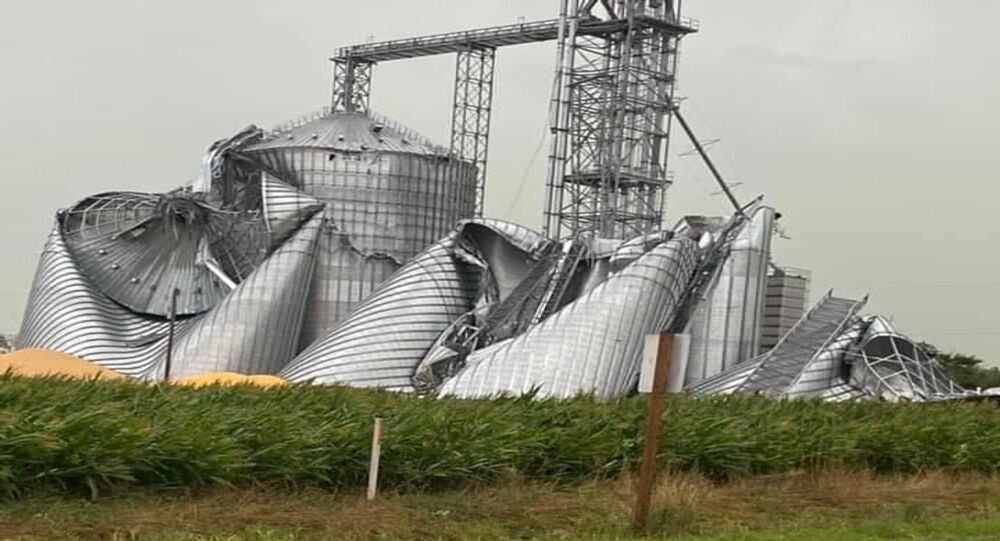 Some 450,000 homes and businesses in Nebraska and Iowa are without power following the onslaught of a derecho that stretched across several states, downed trees and caused structural damage that is now being assessed.

A derecho is a widespread, long-lived windstorm that is generally accompanied by rapidly moving showers and thunderstorms.

The Weather Channel revealed Monday afternoon that winds as high 100 miles per hour impacted Nebraska and Iowa earlier that day, dumping buckets of torrential rain and aggressive gusts of straight-line winds onto areas such as Des Moines, Iowa - home to over 200,000 residents.

The storm sweeping across the Midwest right now is no joke— the scene from Iowa: pic.twitter.com/aN9v3b2cWA

These are just some of the pictures sent in from our crews and viewers from the storm damage in central Iowa. 127,000 and counting without power in DSM metro. Watch for @weareiowa5news live coverage in all our nightly shows. pic.twitter.com/uY6HIzZ4Z8

The outlet reported that some 450,000 homes and businesses have lost power in the two states alone.

Several social media users took to Twitter to document the damage after the storm ripped through their towns.

2x4s punctured through a home in Perry 😳 #iawx

The storm is on course to hit Illinois, according to the US National Oceanic and Atmospheric Administration’s National Weather Service.

"A derecho will rapidly progress across eastern Iowa and northern Illinois this afternoon," the National Weather Service's Storm Prediction Center said. "Widespread severe wind gusts, some of which should reach 80-100 mph are anticipated along [its] track ... Brief tornadoes are also possible."

Social media footage of the storm's aftermath have begun to surface.

A lot of tree damage north of Chicago, a mix from the mesolow and the derecho. Roads in some places are impassible so that’s fun... I’ll continue to drive around and see what I find pic.twitter.com/bDhOeijDYd

Many Midwest residents, including Des Moines-based reporter Dave Price, expressed on social media that they have not experienced a storm of this severity.

How widespread were these storms today in Iowa? 410,191 customers without power across Iowa per @mattbaker7. I moved here in 2001. I don't recall that many people without power from any one storm. @WHO13news

The Des Moines Register noted that a 2011 derecho left 24,000 Iowans without power and resulted in an estimated $5 million in damages.