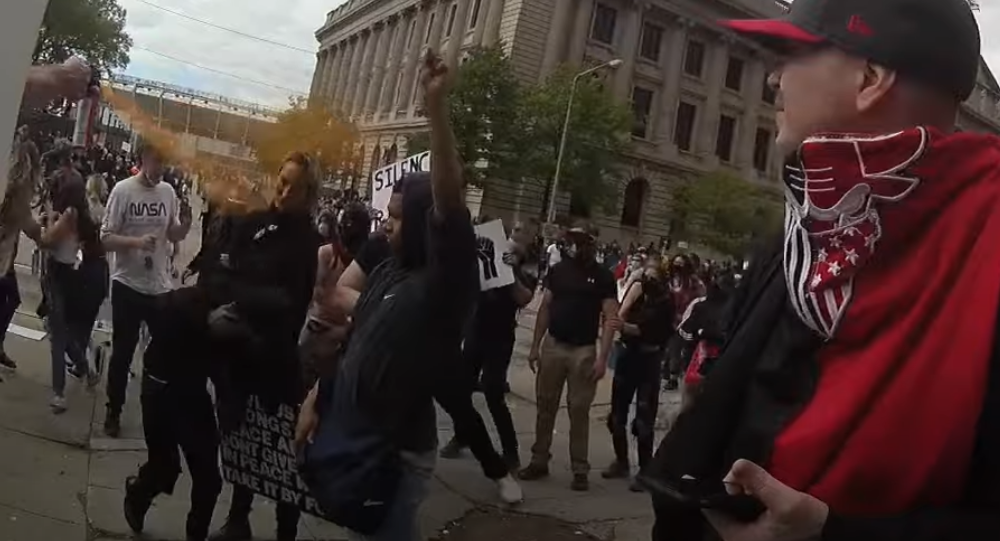 Protests against police brutality were reportedly peaceful as demonstrators convened at Cleveland’s Willard Park earlier that day. However, tensions escalated as riots and looting began to occur alongside the activism.

Later that day, hundreds of protesters descended upon the city’s Justice Center and took their demonstrations to the police line backed by Cleveland police and Cuyahoga County sheriff’s deputies in riot gear.

“We should be burning the whole f**king building,” a woman is overheard saying around the 1:21 timestamp.

“You might want to tell your dude down there to take that sign down,” remarks the recording officer right as another cop is seen pepper-spraying the woman who made the aforementioned comments.

“You don’t even know her,” the recording cop proclaims as protesters rush to assist the woman.

In an apparent defense of the officer who deployed the pepper spray, the officer continues to argue with protesters.

“She- He threw a parking sign,” he says, seconds before the video skips forward.

“What did I do? I stood here, you watched it,” the pepper-sprayed individual asks. “Look at yourselves.”

The incident, which occurred at approximately 4:48 p.m. local time, was one of many clashes that took place in the city, as officers were observed firing pepper balls, flash grenades and tear gas in response to having “water bottles and other items” lobbed at them, according to Cleveland.com.

Protester John Sanders lost his left eye after being struck by a bean bag round on May 30. While Sanders has undergone reconstructive surgery to repair his eyelid, a probe into the matter has been launched by the Cuyahoga County Sheriff’s Department and the Ohio Bureau of Criminal Investigation and Identification.

The Federal Bureau of Investigation’s Cleveland Field Office was quick to issue a notice and offer a reward for information on three men who allegedly committed theft and property damage on May 30. At the same time, Cleveland.com reported that the local sheriff’s office dragged its feet for “nearly two months” on media requests for body camera footage from that day, including the video of the woman being pepper-sprayed.

Cuyahoga County Sheriff’s Department spokesperson Sgt. Jennifer Ciaccia confirmed to the outlet on Wednesday that the incident is “under investigation” and the body camera footage has been issued to the department’s internal affairs unit. The recording officer’s identity remains unknown.

At least two lawsuits against Cleveland authorities have been filed by peaceful demonstrators in relation to the May 30 escalations of violence.

Ryan O’Connor, a 29-year-old Cleveland resident, argued in a late June court filing in the US District Court of Cleveland that Officer John Kazimer violated his civil rights and used excessive force against him while O’Connor was trying to prevent a clash between police and protesters.

Cleveland cop started beating on a man who was HELPING to keep the peace between the cops & the protestors! He was trying to back up the crowd & the cop starting hitting him! Before he hit him, he was swinging the baton showing he was ready to hit people! pic.twitter.com/CPNo3CbxgN

Jaleesa Bennett, another nonviolent demonstrator present that day, filed a lawsuit against the same officer one month later, accusing Kazimer of excessive force. According to the filing, Kazimer blasted Bennett in the face with pepper spray some 30 minutes after he beat O’Connor with his baton.

“This case perfectly highlights why there is such distrust toward police departments,” attorneys Ian Friedman and David Malik said in a statement provided to Cleveland.com. “An officer breaks the law twice on camera, physically harms people and remains a police officer.”