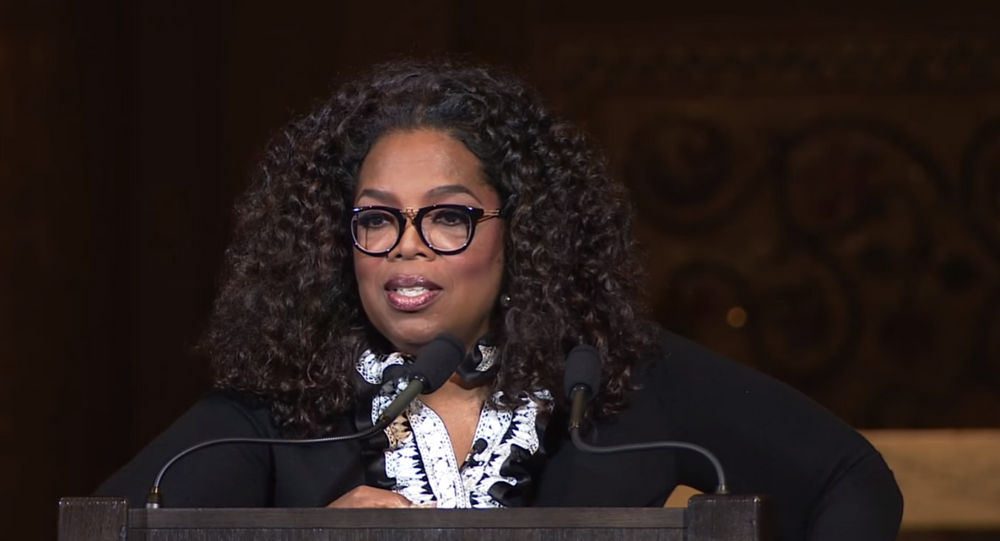 The US TV persona and socialite has sent waves across social media after claiming white people, from whatever walk of life or social stratum, have a leg up due to the mere fact of their "whiteness".

Oprah Winfrey, the 66-year-old media mogul, has been branded a hypocritical "racist fraud" and "a phony" after the latest installment of her Apple TV+ series, "The Oprah Conversation", which this time had former NFL star and race activist Emmanuel Acho as a guest speaker.

Acho joined Winfrey for a two-part episode, which included a segment inviting non-black viewers to ask difficult questions about racism and white privilege.

"Not all white people have power", inferred one guest.

"There's plenty of poor, working-class white people. But I think that when we group all of white people together and we don't recognise the fact that there's a lot of white people that struggle, and it's a different struggle as you mentioned because they're not streaming upstream let's call it …".

Winfrey weighed in asserting that white people at all times have "a leg up":

"There are white people who are not as powerful as the system of white people — the caste system that's been put in place. But they still, no matter where they are on the rung or ladder of success, they still have their whiteness", the media veteran shared.

"You still have your whiteness. That's what the term 'white privilege' is. It means that whiteness still gives you an advantage, no matter", she explained, prompting a storm on Twitter.

Netizens en masse took to comment sections below the links to the Winfrey video labeling the host and socialite, whose net worth currently stands at $2.6 billion, as per Forbes, a "racist phony" and "fraud" who made huge money on her primarily white audiences. The latter was an apparent reference to her long-running publication "O", which is reportedly soon to be shut down after experiencing financial issues during the coronavirus crisis.

"All you #WhitePrivilege white people who helped make @Oprah a #1 rated #billionaire media mogul for years didn't know you were #racists, did you?, queried media contributor and TV host David Webb.

"JUST to make it CLEAR #Oprah is the biggest racist there is. She Always with her criminal pedo white rich friends and backstab the black community EVERY chance she gets", another fumed.

"The ultimate racist speaks", another charged.

And many more added to the chorus of condemnation:

I’ll admit that Oprah is a racist fraud! 👀

Oprah. Just log out. You're still turning off the comments. This is a bit embarrassing coming from a woman that has built her career having those uncomfortable conversations on TV for years. Yous a fraud. https://t.co/jRX7OwHCmH

Worth. $2.6 BILLION dollars, yet #Oprah has the nerve to claim that white people are the cause for why blacks aren't attaining the level of success in the country because of "white privilege." Blow me b****.

You're a fraud like every other lib in Hollywood.

"Self-unaware racist Oprah says it doesn't matter if a white person isn't wealthy or fortunate in life, their biological 'whiteness' still predisposes them to privilege. She sounds like the KKK", another went on, admitting though that "at least the KKK doesn't claim to be fighting racism".

There were, however, those who stood up in Oprah's defence, suggesting all the talk about the media personality's "racism" is unnecessary and racist in itself, since despite her having made a fortune in the media, she "isn’t completely outnumbered by white male billionaires".

Some meanwhile made a fragile attempt to make the two sides reconcile:

"There is no white privilege or black privilege, there is only American privilege thanks to America's color-blind free-enterprise system!", one exclaimed.

'She Wants to Be Like Michael Jackson': Netizens Jeer as Oprah Tumbles Onstage