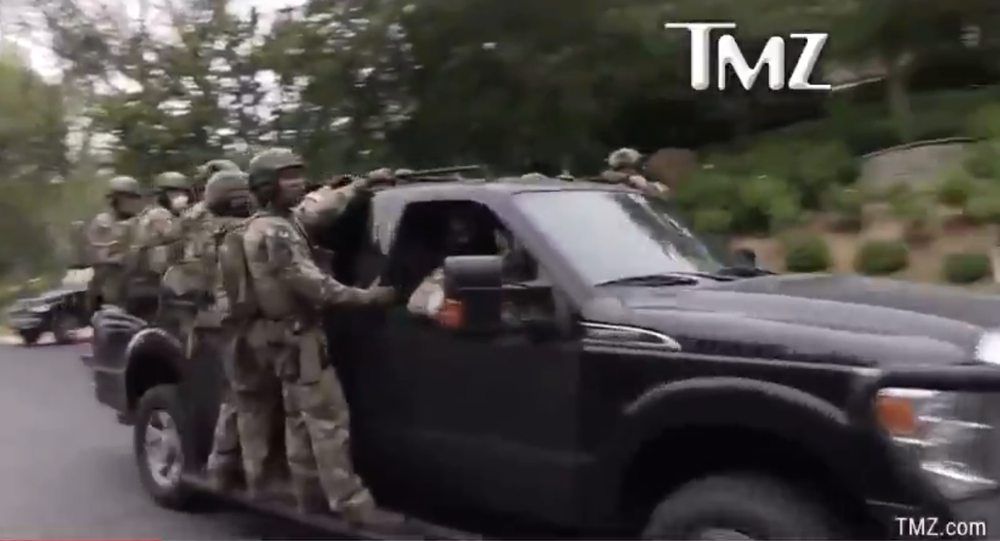 The FBI has revealed it is “investigating allegations of criminal acts” following the execution of search warrants on YouTuber Jake Paul’s mansion in Calabasas, California, and the Graffiti Mansion of Las Vegas, Nevada.

Surely Jake Paul would of had to do something extremely serious for this fucking mini Army to roll up to his mansion, doubt this is over a party lol pic.twitter.com/fd8mabwNTT

Authorities were later seen emerging from the YouTube star’s home with what appears to be several rifles.

Jake Paul’s home loaded with weapons, according to video from ABC7. Several firearms were seized during the FBI raid on Jake’s mansion this morning. A small militia was at Jake’s home, according to TMZ. What are your thoughts? pic.twitter.com/cDhBdcTocW

"The FBI is investigating allegations of criminal acts surrounding the incident at Scottsdale Fashion Square in May 2020," an FBI spokesperson said in a statement obtained by ABC 7.

The raid began at 6 a.m. local time on Wednesday, according to USA Today. No arrests were made.

UPDATE: TMZ is reporting that the FBI also raided the Vegas Graffiti mansion and took someone in custody.

The home is owned by one of Jake Paul's friends. pic.twitter.com/RIZYD0Bmeu

This federal investigation comes alongside a decision by Arizona’s Scottsdale Police Department to drop misdemeanor charges against Paul, Izadi and Andrew Leon.

The three were charged with criminal trespass and unlawful assembly after several businesses inside Scottsdale Fashion Square mall were trashed and looted in the wake of demonstrations over the death of George Floyd, Arizona station KTAR News reported.

Videos posted to social media at the time showed Paul and others at the mall referenced by FBI agents.

“It has been decided that in the cases charging Jake Paul, Arman Izadi and Andrew Leon it is in the best interest of the community to dismiss misdemeanor charges without prejudice so that a federal criminal investigation can be completed.”

Richard Schonfeld, Paul’s attorney, told the Associated Press that he and his client have received word of the search warrant being executed at Paul’s home.

“We are still gathering information and will cooperate with the investigation,” he said, noting that Paul was “out-of-state” during the early-morning raid.

‘How Can You Say Accident?’: Trump Reiterates Possibility That Beirut Blast Was an ‘Attack’