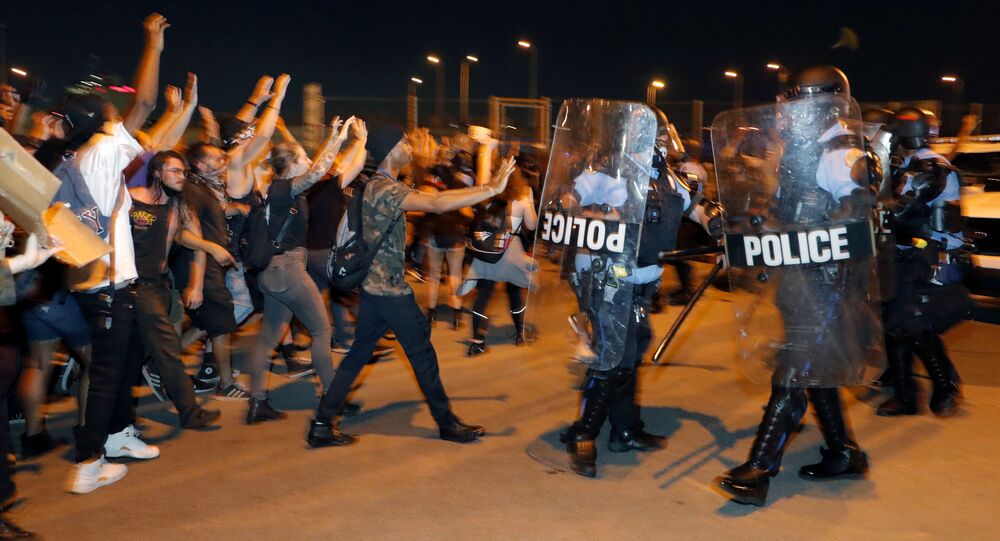 Amnesty International’s latest report details that it has logged at least 125 separate cases of police violence against US residents within two weeks of the Memorial Day killing of George Floyd in Minneapolis, Minnesota.

Officers across the nation were accused by Amnesty on Tuesday of violating the human rights of peaceful protesters, bystanders and members of the press 125 times between May 26 and June 5.

According to the international human rights organization, these incidents occurred in 40 US states and the US capital of Washington, DC, while demonstrators were mourning the killing of Floyd, whose death has since been declared a homicide, with charges filed against former Minneapolis Police Department Officers Derek Chauvin, Alexander Kueng, Thomas Lane and Tou Thao.

“In some instances, the excessive use of force that causes severe pain or suffering may constitute torture or other ill-treatment, in violation of international law,” the report detailed.

One anonymous, 25-year-old demonstrator in Floyd’s city of Minneapolis told Amnesty that he was struck in the eye with a kinetic impact projectile fired by police on May 31 while protesting near University Avenue Bridge.

"Basically, what happened was that my eye exploded from the impact of the rubber bullet and my nose moved from where it should be to below the other eye," they detailed, noting that police, backed by a Humvee, chose to use force before the city’s curfew began.

“I have a lot of questions about how this medical stuff is going to be paid for. I’m fortunate to have a lot of support, but it is a lot and I just got on Medicaid. They gave me an estimate of US$300,000 and I’m only 25 years old.”

According to Amnesty, this is just one of 13 documented instances of “unnecessary use” of kinetic impact projectiles in a total of 13 cities across the US. A number of city councils across the country are seeking to ban the use of rubber bullets by their police forces over the “less lethal” crowd control weapon’s ability to permanently damage or even kill those struck by the projectiles.

The human rights organization also listed the notorious June 1 clearing of the US capital’s Lafayette Park by “multiple law enforcement agencies including the DC National Guard, the Secret Service, the US Park Police and the Federal Bureau of Prisons Special Operations Response Team.”

One member of the US Park Police was documented as warning protesters, “You better back up, or you’re going down,” as authorities began to forcefully push the crowd back around 6:30 p.m. local time.

Mary Small, a demonstrator who was on the scene, told Amnesty that she observed people “lowering a man to the ground” during the commotion created by the cops.

The man, who allegedly “had trouble breathing,” was still being fired on by authorities with pepper ball projectiles and began making “this horrible gurgling, hissing sound.” Small also detailed the man “had a huge bump, like a goose egg, on his head.”

“I did not see any violence by protesters [leading up to the forced dispersal],” she noted - a claim which has been backed by several witnesses from the scene.

Sputnik reporter Nicole Roussell was also injured by multiple rubber bullet rounds as well as the high-speed rubber balls contained in “stinger” grenades. The Russian Foreign Ministry decried her deliberate targeting as a “hostile act,” and the Committee to Protect Journalists said it would investigate.

The organization’s Tuesday release builds off an interactive map of the 125 incidents in question and nearly 500 videos analyzed by Amnesty’s Crisis Evidence Lab.

“The analysis is clear: when activists and supporters of the Black Lives Matter movement took to the streets in cities and towns across the USA to peacefully demand an end to systemic racism and police violence, they were overwhelmingly met with a militarized response and more police violence,” Brian Castner, Amnesty’s senior crisis advisor on arms and military operations, asserted in the June 23 release of the interactive map.

Amnesty’s latest report calls for Congress to pass the George Floyd Justice in Policing Act of 2020 (HR 7120), which is currently stalled on the desk of Senate Majority Leader Mitch McConnell (R-KY) and includes the Police Exercising Absolute Care with Everyone (PEACE) Act.