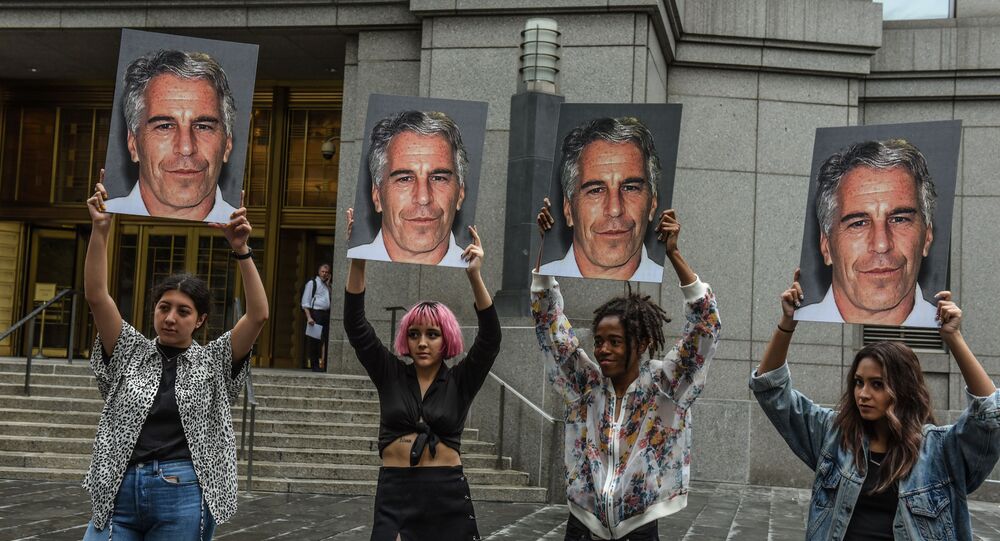 Epstein, who was charged with running a sex trafficking network of minors, hanged himself in a jail cell on 10 August 2019. The circumstances of his death and that his friends and acquaintances were very powerful people – presidents, prime ministers, and royals – led to conspiracy theories, one of which says that the financier was murdered.

US President Donald Trump has cast doubt on whether disgraced billionaire Jeffrey Epstein committed suicide. During an interview with Axios, the president was asked to comment on a recent statement in which he sent well wishes to Ghislaine Maxwell, Epstein's former girlfriend, who was arrested by the FBI at the beginning of July.

"Her boyfriend [Epstein] was either killed or committed suicide in jail. She is now in jail. Yeah, I’d wish her well. I’d wish you well. I’d wish a lot of people well. Good Luck. Let them prove somebody was guilty", Trump said.

"I do wish her well. I’m not looking for anything bad for her... Her boyfriend died in jail. Was he killed? Was it suicide? I do. I wish her well." pic.twitter.com/HpywNVAMY9

​At the end of July, the president recalled how he met Ghislaine Maxwell, who is facing six charges, including a charge for enticing minors – one as young as 14 – to engage in illegal sex acts, numerous times over the years in Palm Beach, where Trump lived. Asked whether Trump thought Maxwell would turn in powerful people friendly with Epstein, the president said he "hadn’t been following it [the case] too much". "I don’t know the situation with Prince Andrew. I don’t know. I’m just not aware of it", the president at a press briefing in the White House.

The remark about the Duke of York seems to contradict the statement Trump made in 2015 when he was running for president. Back then Trump said that Prince Andrew would talk about Epstein's private island, which the president dubbed "a cesspool". "Just ask Prince Andrew. He will tell you about it", Trump said in 2015. The Duke of York was friends with both Ghislaine Maxwell and Jeffrey Epstein and even visited the billionaire in 2010 after the latter was found guilty of soliciting prostitution and ordered to register as a sex offender.

One of Epstein’s alleged victims, Virginia Giuffre, claims she was forced by Epstein and Maxwell to have sex with Prince Andrew on at least three occasions, including when she was an underage girl, a claim the Duke of York categorically denies.

Epstein was arrested in 2019 and was charged with running a sex trafficking network of minors. He, however, did not live to see the trial as he hanged himself in a jail cell. His death occurred under bizarre circumstances. The billionaire earlier attempted to take his life and was placed on a suicide watch. Yet, days later he was taken off it. The guards that were tasked with watching him fell asleep when he died.

All these suspicious details and the fact that Epstein rubbed shoulders with prime ministers, royals, celebrities, and presidents, including former president Bill Clinton and Donald Trump, sparked conspiracy theories. Per one such theory, Epstein faked his own death and escaped from jail with the help of his powerful friends. According to another, those same friends killed Epstein because they feared he would turn them in during his trial.