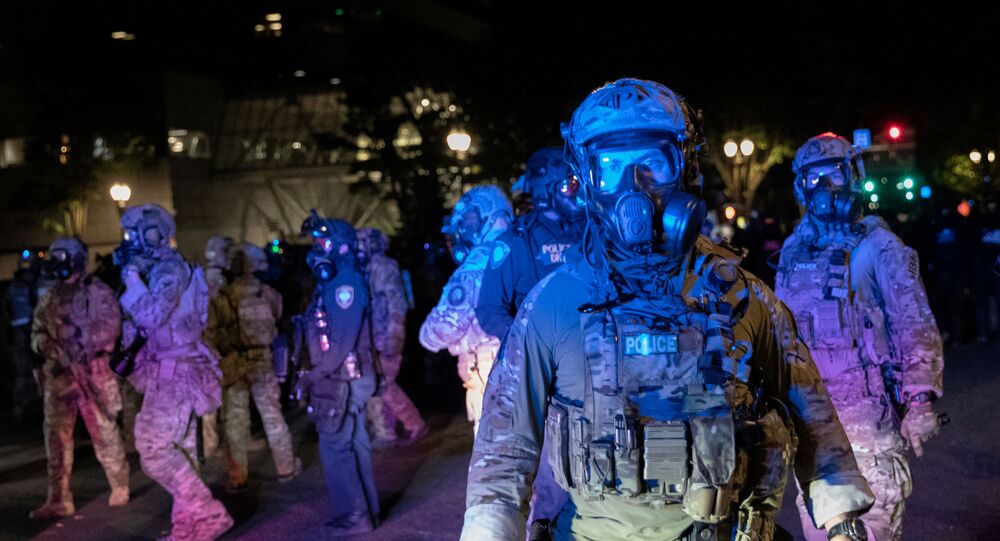 Several lawmakers in Congress are calling on former acting Undersecretary of Homeland Security for Intelligence and Analysis Brian Murphy for answers following reports that the Department of Homeland Security (DHS) has been actively compiling “intelligence reports” on journalists covering the federal deployment of cops to Portland, Oregon.

“We have grown increasingly concerned about the role and operations of the Department of Homeland Security, and the Office of Intelligence and Analysis (I&A) in particular, with regard to the protests in Portland, Oregon,” detailed Senators Mark Warner (D-VA), Dianne Feinstein (D-CA), Ron Wyden (D-OR), Martin Heinrich (D-NM), Angus King (I-ME), Kamala Harris (D-CA) and Michael Bennet (D-CO), all of whom are members of the Senate Select Committee on Intelligence.

“Given the intense national as well as congressional interest in DHS activities related to protests in Portland and around the country, documents and other information related to I&A’s operations should be provided to the Committee pro-actively, and not merely in response to repeated requests or following revelations in the press.”

According to a July 30 report by the Washington Post, an internal DHS document obtained by the outlet revealed that at least three Open Source Intelligence Reports were distributed among those belonging to “federal law enforcement agencies and others.”

Said intelligence reports allegedly summarized tweets composed by “a reporter for the New York Times and the editor in chief of the blog Lawfare” and highlighted that the individuals “published leaked, unclassified documents about DHS operations in Portland.”

The reports viewed by the Post are said to have included written descriptions and screenshots of the tweets, along with the posts’ engagement information.

After the Post’s report was published, Murphy was reassigned to a new position within the DHS, the New York Times reported.

In their letter, the senators asked Murphy a total of 25 questions regarding the role of his office in DHS operations in Portland and requested that he respond by August 6.

“During the July 23, 2020, briefing, you stated that I&A had neither collected nor exploited or analyzed information obtained from the devices or accounts of protesters or detainees. Please confirm,” requested the senators.

Author Caleb Maupin joined Radio Sputnik’s Critical Hour on Friday and told hosts Dr. Wilmer Leon and Garland Nixon that there are “different factions and different groupings within the deep state that have different agendas” - especially when it comes to controlling the media.

“While controlling the media has long been something that those kinds of agencies have tried to do … and there’s something going on here where they’re trying to keep track of different people in media, keep track of what they’re reporting and make sense of what’s going on,” he said.

“There is an attempt to try and bring some stability to all of this, and that, probably, makes sense of the fact that there are these ... ‘baseball cards’ they made of different journalists.”

Benjamin Wittes, editor-in-chief of Lawfare, has spoken out about the DHS’ decision to include his tweets in its intelligence reporting, noting that he is “not sure how my reporting of unclassified material constitutes any kind of homeland security threat that justifies the dissemination of intelligence reporting on a US person, particularly not one exercising core First Amendment rights and nothing more. I intend to find out.”

Rep. Adam Schiff (D-CA), chair of the House Permanent Select Committee on Intelligence, issued a letter on Monday to DHS acting Secretary Chad Wolf and acting Undersecretary of Homeland Security for Intelligence and Analysis Horace Jen, announcing a probe into the “I&A’s expanded intelligence activities, including its actions in Portland and involvement in the Administration’s response to protests nationwide,” according to the release.

“The revelations thus far require a full accounting, and, if substantiated, must never be allowed to occur again,” Schiff wrote. He expressed in his memo that the “I&A’s legal justification for its ‘expanded’ domestic intelligence activities” remains “unpersuasive.”