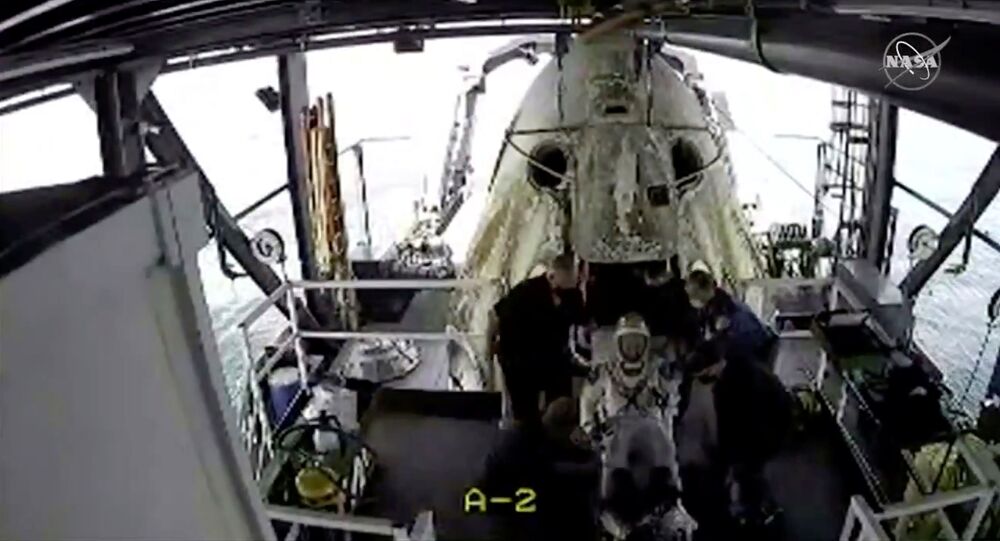 WASHINGTON (Sputnik) - Astronauts Robert Behnken and Douglas Hurley who have come back to Earth from the International Space Station (ISS) aboard SpaceX’s Crew Dragon spacecraft are safe and have been taken out of the capsule, according to the National Aeronautics and Space Administration (NASA).

"To anybody who has touched Endeavour, you should take a moment to just cherish this day," Doug Hurley said, as quoted by NASA on Twitter, as Behnken was safely brought out of the spacecraft on Sunday.

"To anybody who has touched Endeavour, you should take a moment to just cherish this day."

Hurley was taken out of Crew Dragon after Behnken. "Applause is heard from the @SpaceX teams as @Astro_Doug has join[ed] @AstroBehnken safely out of the Dragon Endeavour spacecraft," NASA said on Twitter.

Applause is heard from the @SpaceX teams as @Astro_Doug has joins @AstroBehnken safely out of the Dragon Endeavour spacecraft. #LaunchAmerica pic.twitter.com/3aBzXbAzuG

The two astronauts will now undergo a medical examination, after which they will be taken to a military base in Florida and then to Houston, Texas.

"Great to have NASA Astronauts return to Earth after very successful two month mission. Thank you to all!" US President Donald Trump wrote on Twitter on Sunday.

Great to have NASA Astronauts return to Earth after very successful two month mission. Thank you to all!

Crew Dragon performed water landing in the Gulf of Mexico at 2:48 p. m. local time (18:48 GMT) on Sunday, finishing its flight to the ISS. This was the first water landing of a US piloted spacecraft since 1975.

There was a minor issue with toxic vapours after the landing and SpaceX engineers had to purge the vapor fumes around Dragon Endeavour before opening the hatch of the capsule.

"Our recovery teams are making sure that there are no poisonous fumes around the capsule, both for the safety of @AstroBehnken and @Astro_Doug and the people recovering them from the water," NASA said on Twitter after the water landing.

Our recovery teams are making sure that there are no poisonous fumes around the capsule, both for the safety of @AstroBehnken and @Astro_Doug and the people recovering them from the water. #LaunchAmerica pic.twitter.com/iUZDb957Kl

SpaceX made history back in May when it flew people to the ISS on the world's first commercially-made spacecraft. Sunday was the first time that the Crew Dragon (Dragon Endeavour) brought passengers back to Earth.

Crew Dragon, carrying astronauts Robert Behnken and Douglas Hurley, successfully undocked from the ISS at around 23:34 GMT on Saturday. It took the spacecraft about 19 hours to get back to Earth.