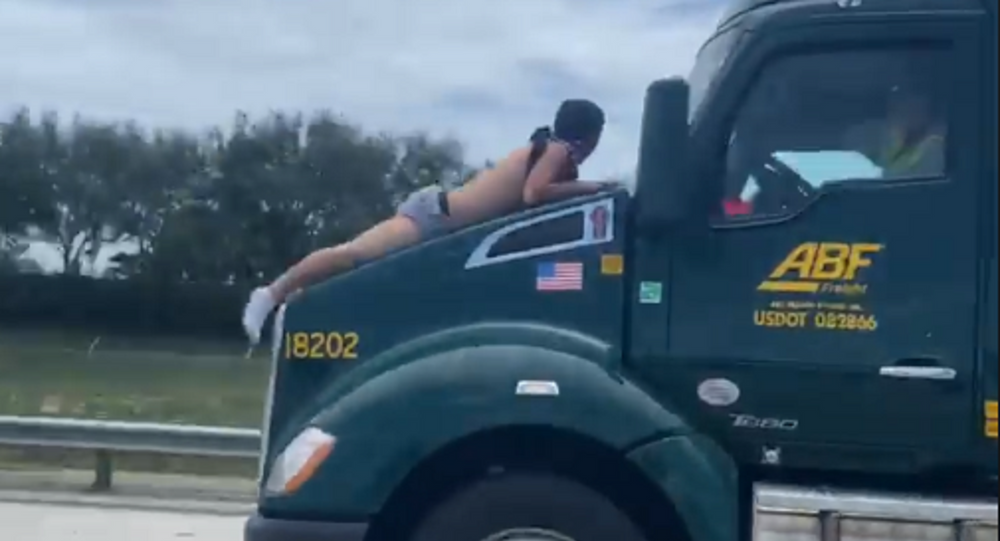 The cinematic incident, which has been shared on social media, was said to have taken place on a Florida highway on Saturday, as a double-trailer semi-truck was travelling in the northbound lane near Boynton Beach.

A blooded man was recorded on video on Saturday clinging to the hood and windshield of a large semi truck traveling on a Florida highway for some 9 miles (14.5 kilometers), as the driver of the vehicle attempted to shake him off by swinging the steering wheel back and forth and braking hard, the Daily Mail reported.

In the Hollywood-like video, filmed by Erik Morales and his partner Leanna Cole who were driving by the double-trailer semi, the man hung on the truck hood as the driver moved the vehicle to the left and right in an attempt to shake the man off the hood. The driver also hit the brakes at times to encourage the passenger on the hood to debark from the vehicle.

“I wonder how this all started holy shit watch this video to the end I just took this on 95 right now 😂 the cops were called by the line of cars behind me. So stop worrying.  this man had a steel flat bar in his hand trying to kill the driver. What happened here?” Morales captioned the video on Facebook.

The man on the hood was earlier driving a Toyota SUV on the same road but in the opposite direction, according to reports, and carrying another passenger before the former started behaving erratically, stopped the vehicle on the exit ramp to Boynton Beach, got out, crossed over the median, and begun walking on the highway, the passenger told Florida Highway Patrol (FHP) dispatchers, according to the outlet.

The FHP said that the motorist, after hopping over the concrete divider between the turnpike's southbound and northbound lanes, caused traffic to come to a stop before he then jumped onto the hood of the semi tractor-trailer.

The driver of the semi, Edward Hughes, told TMZ that the man, appeared to have been bleeding, and waved for him to stop.

“This dude hopped onto the interstate bloodied and frantic, waving for the truck to stop,” Hughes said, quoted by TMZ.

Hughes claimed that once he stopped, the man latched onto the truck hood and started bashing the windshield using a metal object. A panicked Hughes said that he pressed the gas in a bid to shake the man off the hood.

The truck driver traveled some 9 miles before he was stopped by FHP troopers, who took the bleeding man to the hospital.

It is not yet clear whether the man or the semi-truck driver have been charged with any crime.

No, Not Finding Your Mate There! Cobra Crawls Into Man's Pants in India