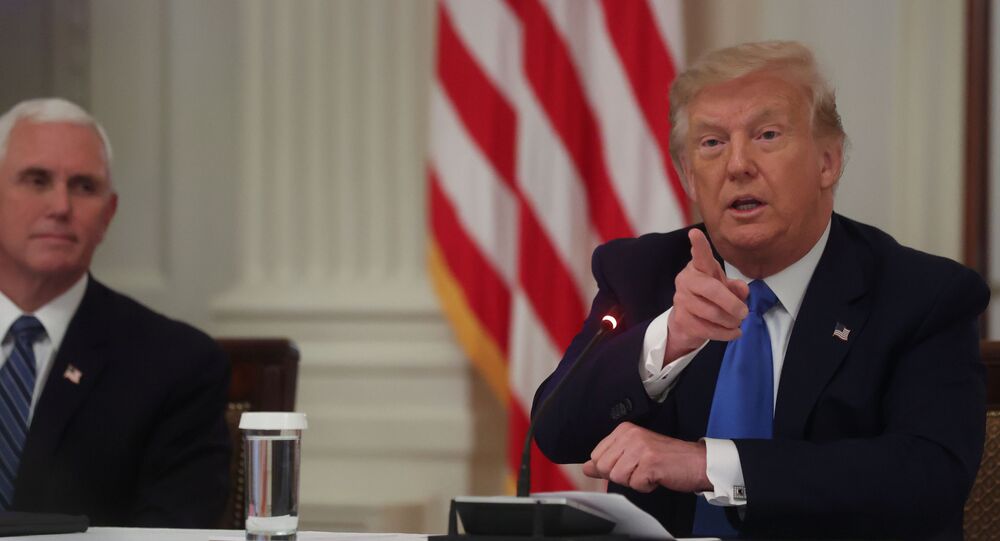 Last week, the president said he would be “very angry” if the information published in the US media about alleged Russian payments to Taliban militants for the killing of American troops was proven to be true. Previously, Russian and US officials and even the Afghan militants themselves had all dismissed the allegations.

US President Donald Trump has reiterated that has not seen any evidence to suggest that the ‘Russian bounties’ allegations are true, and indicated that they may have been fabricated by Democratic adversaries like California Congressman Adam Schiff to attack his administration.

“I think it’s another Russia hoax. They’ve been giving me the Russia hoax – Shifty Schiff and all these characters – from the day I got here,” Trump said, speaking to reporters in Florida on Saturday.

“We’re working with Russia right now on a nonproliferation agreement – nuclear nonproliferation. And if we can get something like that, it’d be great. But [the bounties’ intelligence assessment] was never brought to my attention, because it didn’t reach the level,” Trump added, referring to a recent telephone conversation he’d had with Russian President Vladimir Putin in which the bounties claims were reportedly left unmentioned.

“There are a lot of people, including Democrats, that said it never took place. If it did take place, it would have been brought to my attention, and I would take very strong action,” Trump said of the bounties claims.

“There’s been nobody tougher with Russia or China than I have, not even by a longshot,” the president added, mentioning sanctions, new NATO defence spending, and US pressure against Europe over the purchase of Russian energy supplies.

In late June, the New York Times reported, citing anonymous intelligence sources, that Russian military intelligence has allegedly been paying bounties to Taliban-linked militants to kill US troops in Afghanistan. Last month, the newspaper issued a new report citing the National Intelligence Council which noted that the US “lacks direct evidence” on the bounty claims. However, two weeks later, the paper again dusted off the allegations, now claiming that not only Russia, but Iran (whose Shia government is openly hostile to the Sunni Taliban) had supposedly been supporting the militant group.

Senior US military and intelligence officials have dismissed the allegations, while Moscow called the reports “blatant lies” designed to keep US forces in Afghanistan forever. Taliban representatives have similarly denied the allegations, accusing the Afghan government of leaking false intelligence to the US in a bid to maintain the US presence in the country.

© AP Photo / Raumat Gul
Taliban Group Says Completed Release of 1,000 Afghan Prisoners Under Agreement With US
Despite the lack of evidence, senior Democratic leaders have called for new, immediate sanctions to be introduced against Russia over the reports. The Trump administration has launched internal probes into who was behind the leaked claims, with White House Chief of Staff Mark Meadows promising to pursue these persons in court, and saying they would “go to jail” for their alleged infractions.

The bounties claims come in the wake of the peace deal between Washington and the Taliban that was signed in February. Under the agreement, US troops will withdraw from Afghanistan in 14 months if the Taliban refrains from attacking US forces and engages in peace talks with the government in Kabul.

* Russia considers the Taliban to be a terrorist group, and the organisation is banned from operating on its soil.