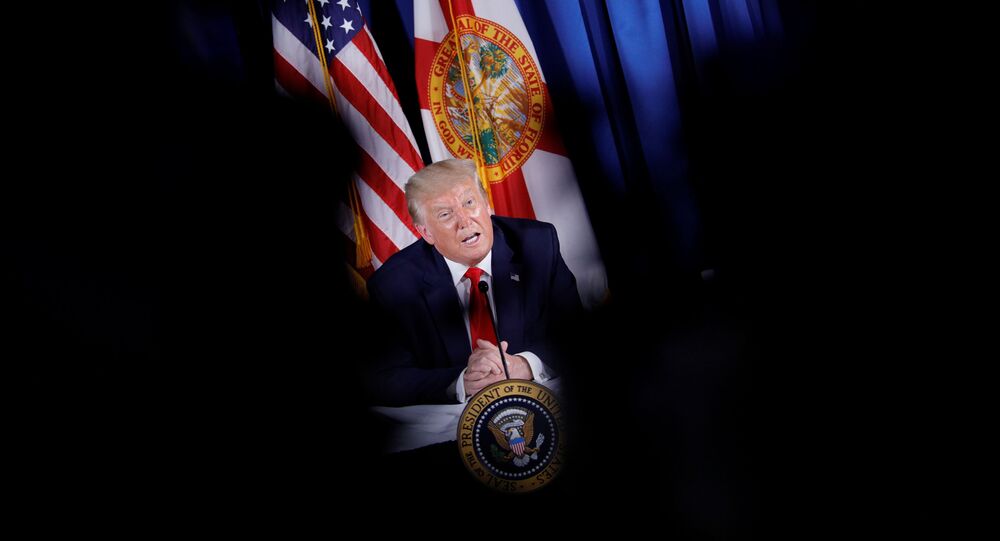 Reports of Trump weighing a possible ban of TikTok in the United States emerged after several Republican Senators raised concerns that China might meddle with the US presidential election via TikTok - a video platform with short musical videos.

US President Donald Trump, while speaking to reporters on Air Force One, announced that TikTok will be banned from the United States.

He said he will act "as soon as Saturday" to ban the Chinese-owned video platform in the US over "security fears".

“As far as TikTok is concerned we’re banning them from the United States", the president said. "Well, I have that authority. I can do it with an executive order or that...[] In other words it’s a severance. It’s a severance".

According to print pooler David Cloud, Trump also said that he would not favor a US company buying TikTok operations. The rest of his comments were off the record.

​Earlier, Trump was reportedly mulling the possibility of "a couple of options" regarding TikTok, including a ban. He also said that alternatives to the video platform were being looked into.

Before Trump announced his intentions to ban TikTok, The New York Times reported, citing unnamed sources, that Microsoft was in negotiations to buy TikTok from Chinese company ByteDance, with TikTok considering "other scenarios to alleviate concerns by US officials". Among them, the company was considering non-Chinese investors like Sequoia Capital, SoftBank and General Atlantic to buy the app's majority stake from ByteDance.

Reporting on possibilities for TikTok amid US concerns, The NYT said that the Committee on Foreign Investment in the United States had decided to order ByteDance to divest TikTok, with the government engaged in talks over the terms of a separation.

Trump also reportedly considered another option, putting TikTok’s parent on a so-called “entity list,” to keep it from purchasing American products and services without a special license. The US president also reportedly mulled introducing an executive order based on the International Emergency Economic Powers Act that allows certain foreign apps to be banned in the US.

Despite calling the app a "national security threat", the White House, is aware, according to The NYT, that the United States is one of TikTok's largest markets, and its ban would significantly impact the app.

Amid tensions between the US and China, and the Trump administration accusing Chinese tech giant Huawei of being a "national security threat", TikTok has received similar criticism, with GOP lawmakers and the Trump White House ramping up allegations that the app would be used in "meddling" with the US election.

TikTok denied the accusations, outlining that the video platform is not a "go-to app to follow political news or candidates". After the Trump administration's claims that the app is connected with the Chinese Communist Party and private data of American users could be stolen, TikTok noted that servers with American data have been moved to the United States.

The video platform has about 800 million monthly active users, and it has been downloaded over 2 billion times worldwide, with 500 million coming from India, 180 million from China and 150 million from the United States, according to US marketing statistics.

Trump May Ban TikTok in US, Looking for Domestic Alternative, Media Report Suggests