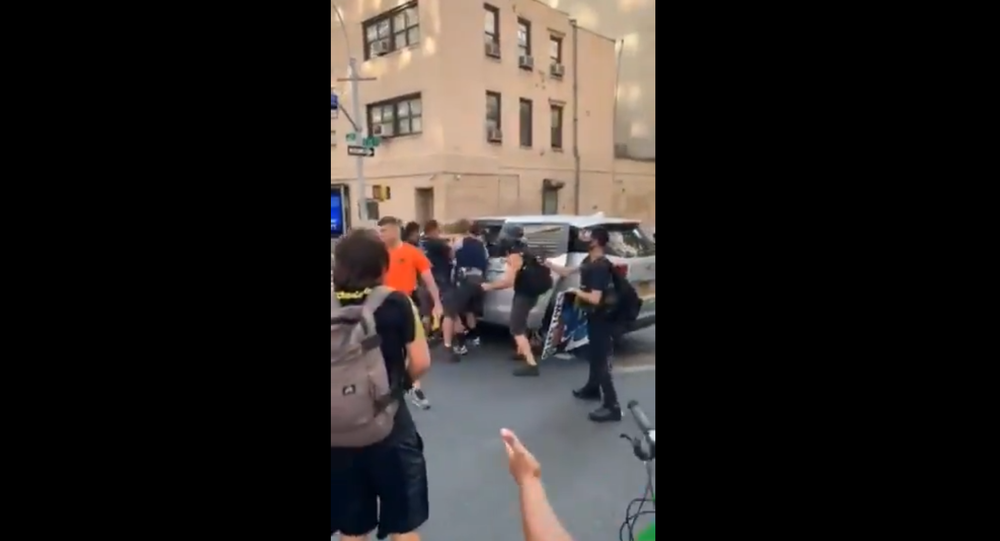 After hours of speculation on a viral video showing the abduction of a woman during a demonstration in the New York City borough of Manhattan, the New York City Police Department (NYPD) confirmed late Tuesday evening that its officers were responsible for carrying off the woman in an unmarked Kia minivan.

“In regard to a video on social media that took place at 2 Ave & 25 St, a woman taken into custody in an unmarked van was wanted for damaging police cameras during 5 separate criminal incidents in & around City Hall Park,” the NYPD said in a July 28 Twitter post.

The video in question was uploaded on Tuesday evening by user @MichelleLhooq and, as of this article’s publication, has accrued more than 11.7 million views.

The footage begins with the woman being taken to the ground by individuals who are now known to be plainclothes officers affiliated with the NYPD. Other cops are seen threatening protesters with possible deadly force as they touch their holstered guns and demand demonstrators back away from the unmarked Kia minivan.

According to CBS New York, the abduction occurred amid a peaceful protest where demonstrators were providing food to homeless individuals.

Bicycle cops begin to swarm the scene after about 15 seconds and use their vehicles to create a barrier between the crowd and the unmarked minivan.

“The arresting officers were assaulted with rocks & bottles,” the NYPD claimed in its Twitter post. The department also provided further justification for its actions in a series of follow-up posts.

However, footage from the scene appeared to only show a single plastic water bottle rolling near an officer.

The woman taken into custody has been confirmed as Nikki Stone, an 18-year-old transgender woman who is also homeless, reported CBS New York.

New York City Mayor Bill de Blasio said Wednesday that he believes “it was the wrong time and the wrong place to effectuate that arrest.”

“A lot of us have been watching in pain what’s going on in Portland, Oregon,” he said, as reported by the outlet. “Anything that even slightly suggests that is, to me, troubling, and it’s the kind of thing we don’t want to see in this city.”

Netizens also slammed the NYPD for what many viewed as an escalation of tensions between the public and the officials who are supposed to protect them.

“This is not a drill. There is no excuse for snatching women off the street and throwing them into unmarked vans,” she said in a tweet hours after the arrest. “To not protect our rights is to give them away. It is our responsibility to resist authoritarianism.”

Jezebel reported Wednesday that Stone has since been released from NYPD custody.