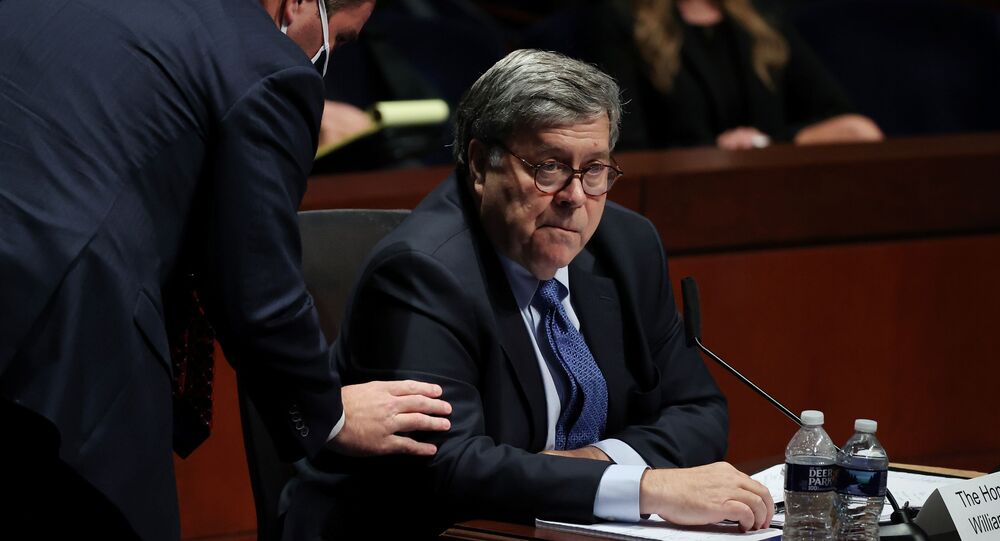 Incumbent US President Donald Trump is expected to face presumptive Democratic nominee Joe Biden in the 3 November elections. As polls show Biden in the lead in several states, Trump is claiming that the elections might be rigged, particularly through the use of mail ballots.

US Attorney General William Barr said during a Tuesday House Judiciary Committee hearing that he would leave office if President Donald Trump is not re-elected in November.

"If the results are clear, I would leave office", Barr said, when asked of his plans if Trump loses, but refused to leave office on Inauguration Day, 20 January.

When asked “Do you believe that there is any basis or legitimacy to Donald Trump’s recent claim that he can’t provide an answer as to whether he would leave office?", Barr refused to comment.

“I really am not familiar with these comments or the context in which they occurred, so I’m not going to give commentary on them", the current US attorney general said.

The comments referred to by Barr occurred during a Trump interview with Christopher Wallace of Fox News, as POTUS, after dismissing the Fox News polls showing a Biden lead, said that he believes mail-in voting could "rig the election" and refused to directly answer whether he would accept the election results in November.

Trump then disproved Wallace's allegations that he suggested he might not accept the results of the election by adding: "I have to see".

When interviewed by Fox News' Harris Faulkner in June, however, Trump answered a similar question with "Certainly, if I don't win, I don't win".

It is not the first time Trump has suggested that mail-in ballots could threaten his re-election, saying in a June interview with Politico that mail-in voting is his "biggest risk" and repeatedly insisting that the longterm practice could result in voter fraud. Several states have recently switched to mail ballots only in the wake of COVID-19 pandemic restrictions.

Barr insisted that he does not think that the 2020 election will be rigged.

The US presidential elections are scheduled to be held on 3 November, with Trump to apparently face the presumptive Democratic nominee, Joe Biden. The first presidential debates are expected to be held on 29 September in Cleveland, Ohio, with a venue yet to be appointed.