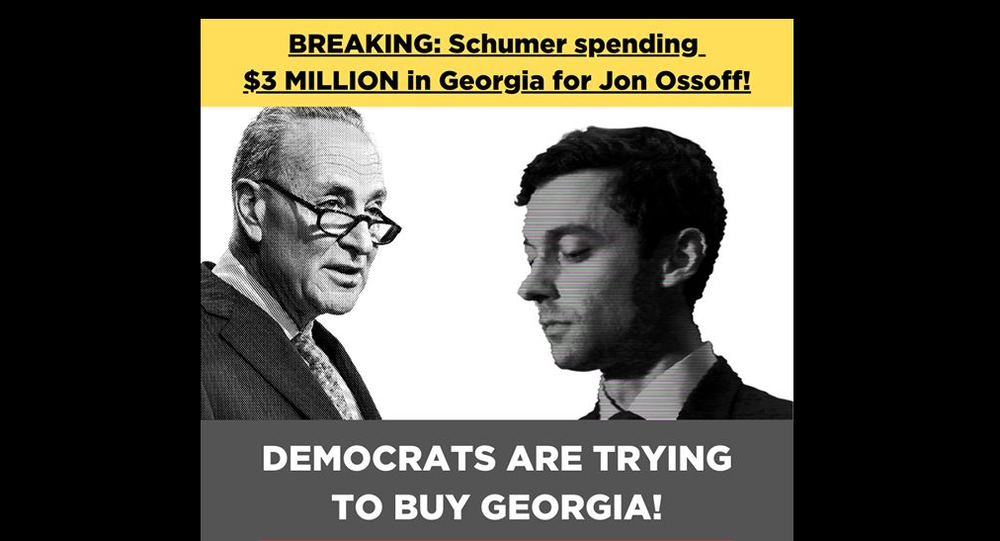 American voters are accusing US Senator David Perdue (R-GA) of anti-Semitism and calling on the lawmaker to resign following the publication and retraction of a campaign advertisement that appears to show his Democratic opponent Jon Ossoff, who is Jewish, with a doctored nose.

The ad in question, which started running on July 22, featured black-and-white images of Ossoff and Senate Minority Leader Chuck Schumer (D-NY), who is also Jewish, and warned voters that “Democrats are trying to buy Georgia!”

According to publicly available ad data on Facebook, Perdue’s campaign paid between $300 and $399 for the now-inactive ad. While the ad was projected to potentially reach more than a million netizens on Facebook and Instagram, it was only seen between 3,000 and 4,000 times before it was pulled from the platforms.

Maurice Meilleur, an assistant professor of graphic design at Iowa State University, confirmed to The Forward that Ossoff’s nose is “the primary difference where the altered version is larger than the original.” Two unnamed graphic design experts agreed with Meilleur’s assessment.

Meilleur also provided the outlet with an image showing the altered photo overlaid with the original photo.

“In the graphic design process handled by an outside vendor, the photo was resized and a filter was applied, which appears to have caused an unintentional error that distorted the image,” a Perdue campaign spokesperson claimed to The Forward.

“Anybody who implies that this was anything other than an inadvertent error is intentionally misrepresenting Senator Perdue’s strong and consistent record of standing firmly against anti-Semitism and all forms of hate.”

“Sitting US Senator David Perdue's digital attack ad distorted my face to enlarge and extend my nose. I’m Jewish,” Ossoff said in a Monday tweet. “This is the oldest, most obvious, least original anti-Semitic trope in history. Senator, literally no one believes your excuses.”

Ossoff, along with scores of netizens, has called for Perdue to take accountability for his campaign’s actions. Some social media users have also demanded the lawmaker resign.

So now Perdue refuses to take responsibility for his extremely obvious anti-Semitic attack, seen by thousands.

The Senator should find the courage to stop hiding behind his spokesperson.

The Georgia Democratic Party has condemned the “anti-Semitic attack” on Ossoff and called on Perdue to not only apologize to his opponent, but also to fire the individual responsible for the photo’s alteration.

However, former Senator Norm Coleman (R-MN), head of the Republican Jewish Coalition, defended Perdue in a Tuesday statement and argued that the Georgia lawmaker is “a true ally” to the Jewish community.

“Time and again, Senator David Perdue has proven himself to be a true friend to the Jewish community and has stood firmly against anti-Semitic bigotry,” Coleman claimed.

Perdue has yet to personally comment on the situation.