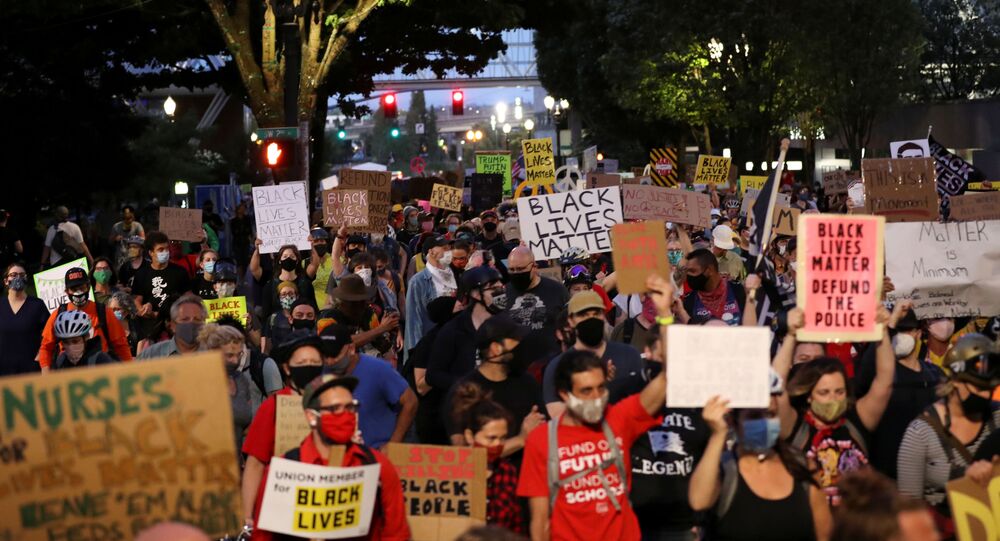 MOSCOW (Sputnik) - Federal officers arrested 22 people in the US city of Portland, Oregon during violent protests that took place near a courthouse over the past weekend, the Department of Justice said, adding that the detained individuals are facing federal charges.

"U.S. Attorney Billy J. Williams announced today that 22 people have been arrested and are facing federal charges for their roles in weekend protests at the Mark O. Hatfield U.S. Courthouse in Portland", a Department of Justice press release, which was published on Monday evening, read.

The arrests relate to incidents that took place from 23-26 July, and the charges include assault of a law enforcement officer, destruction of property, arson, and vandalism, the Department of Justice said.

Since the start of the unrest in Portland, 74 arrests have been made and 60 people have been charged, Department of Justice spokeswoman Kerri Kupec said on Monday evening.

Protests have continued to rage on in the city of Portland following the death of George Floyd, an unarmed African-American male, in police custody back in May in the northern city of Minneapolis.

The Trump administration has deployed hundreds of federal agents, who have been accused of attacking protesters and reporters, including a team from Russia’s Channel One broadcaster, who suffered injuries and had their equipment destroyed while attempting to cover the protests.

A lawsuit was filed on Monday against the Department of Homeland Security and other government agencies by protesters in Portland over the heavy-handed tactics of federal agents.