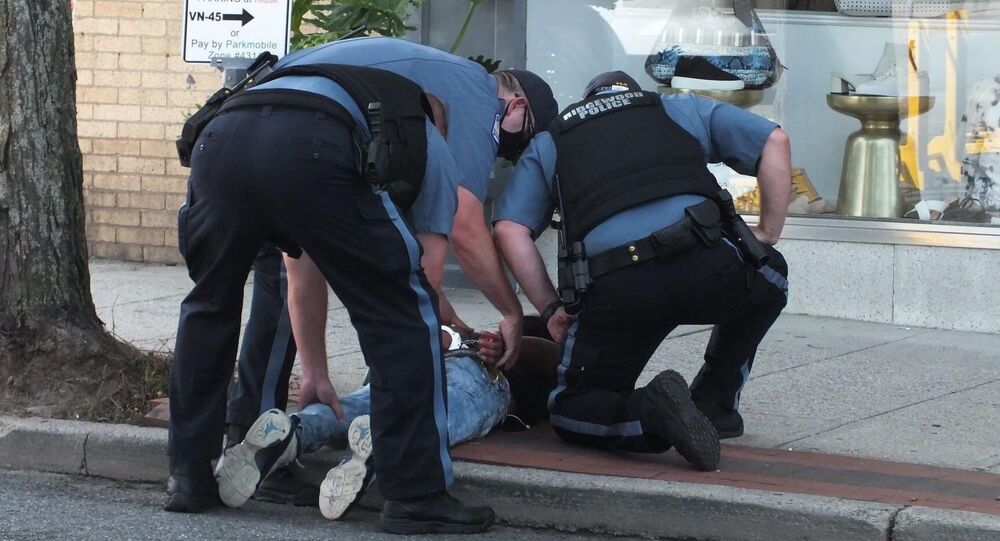 A New Jersey police department has launched an internal use-of-force review following the weekend circulation of social media footage showing two officers manhandling a 15-year-old boy before pinning him to the ground.

New Jersey’s Ridgewood Police Department (RPD) has been slammed with police brutality allegations after two unnamed officers appeared to use excessive force against a 15-year-old cyclist on Sunday.

Footage of the scene uploaded to Twitter by Karol Ruiz, co-president of immigrant rights group Wind of the Spirit, shows the teen attempting to retreat from an officer until he is flanked and grabbed by another cop.

A crowd of cyclists watching and recording the scene can be overheard protesting the officers’ actions. The two men are seen pinning the 15-year-old to the ground while appearing to ignore his screams about stomach pains.

So @Rpdnj “protect & serve” our youth by ensuring they ride bicycles with a helmet by beating them down & arresting them? This is a minor. He is Latino. @NewJerseyOAG @GovMurphy @LATINOACTION the investigation needs to start NOW. @RW4BL_ @jnena08 pic.twitter.com/5UYICxCRbO

The unidentified teen can be heard repeatedly telling officers to “get off me.”

According to a Monday news release issued by the RPD, the cyclists in the area were “in the road obstructing traffic and causing safety hazards to passing motorists and to themselves.”

The department claimed the group of teens ignored sirens, police lights and verbal commands issued by officers. The cyclists managed to elude the police until a patrol unit caught up with them and began to “speak with the group about bicycle safety and about the groups [sic] conduct.”

“One bicyclist disregarded the safety of others and began to pass the Officer as the Officer was speaking with the group. After some conversation, the Officer advised that bicyclist that he was going to be issued a summons by the Officer,” the release claimed.

“At that time, the bicyclist attempted to flee and began to pull his bicycle away from the Officer.”

The statement highlighted that the juvenile was “actively” resisting throughout his detention, which resulted in four court summonses for motor vehicle violations.

Emily Rizzo, an organizer for Ridgewood for Black Liberation, told NorthJersey.com that all officers involved should be fired.

"This is why we call for defunding the police and funding the community instead," Rizzo said. "Because clearly, these Ridgewood officers can’t be trusted to so much as respond to youth bike riding on a Sunday without escalating to violence."

The RPD noted on Monday that the incident remains “under active investigation.” The case has also been referred to the department’s Internal Affairs Unit.