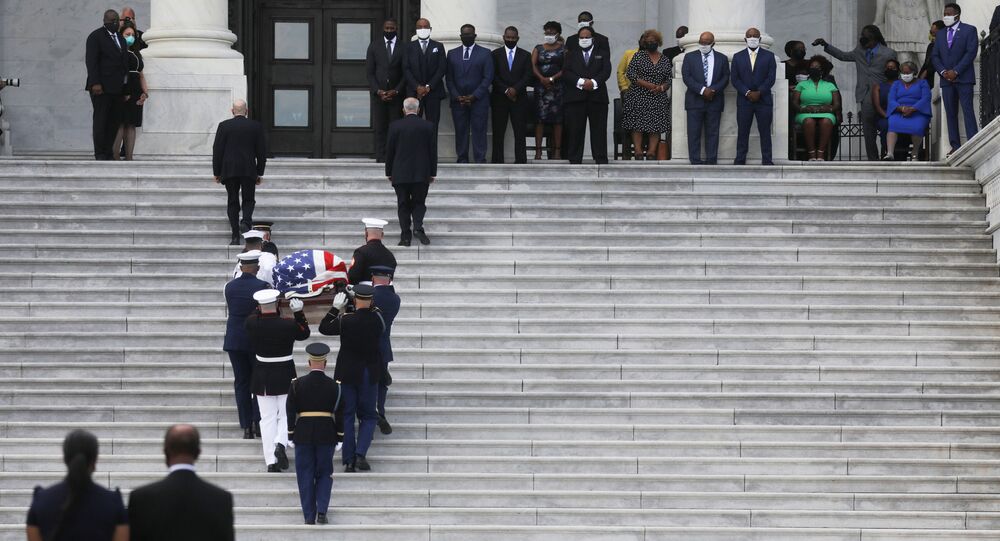 The body of Rep. John Lewis (D-GA) arrived Monday at the US Capitol Building to lie in state, moments after a motorcade procession took the remains of the civil rights icon through numerous historical landmarks in Washington, DC.

With the Capitol closed to the public amid the COVID-19 pandemic, Lewis’ body will lie in state for only a few hours under the Capitol dome for an invitation-only ceremony reserved exclusively for congressional lawmakers.

Leah Millis
A U.S. military honor guard carries the casket of civil rights pioneer and longtime U.S. Rep. John Lewis (D-GA), who died July 17, up the steps of the U.S. Capitol to lie in state inside the Rotunda in Washington, U.S., July 27, 2020.

While there are many preventative measures in place to combat the novel coronavirus, Lewis’ family has still urged out-of-state individuals against traveling to the nation’s capital and instead asked them to post virtual tributes on social media with either the “#BelovedCommunity” or “#HumanDignity” hashtag.

Prior to the motorcade’s arrival at the US Capitol, the procession made several stops along the way, the first of which was at the Martin Luther King Jr. Memorial before momentarily stopping in front of the Lincoln Memorial and on Black Lives Matter Plaza, across from the White House.

The previous week, when plans were still being arranged for Lewis’ procession, Rep. Raúl Grijalva (D-AZ) remarked that “if anybody deserves to lie in state here at the Capitol, it's John.”

“Not only was he the conscience of the Congress, but he also brought nobility to the position,” he added. “People like him are irreplaceable.”

Over the weekend, the late civil rights leader crossed the Edmund Pettus Bridge in Selma, Alabama, for the final time aboard a horse-drawn carriage.

On March 7, 1965, Lewis and hundreds of other peaceful protesters were viciously attacked by police at the bridge, and he often revisited the area in the years that followed.

Lewis died at the age of 80 on July 17 after battling pancreatic cancer. Lewis’ body will be interred Thursday at the South-View Cemetery in Atlanta, Georgia, after laying in state at the Georgia Capitol Rotunda.