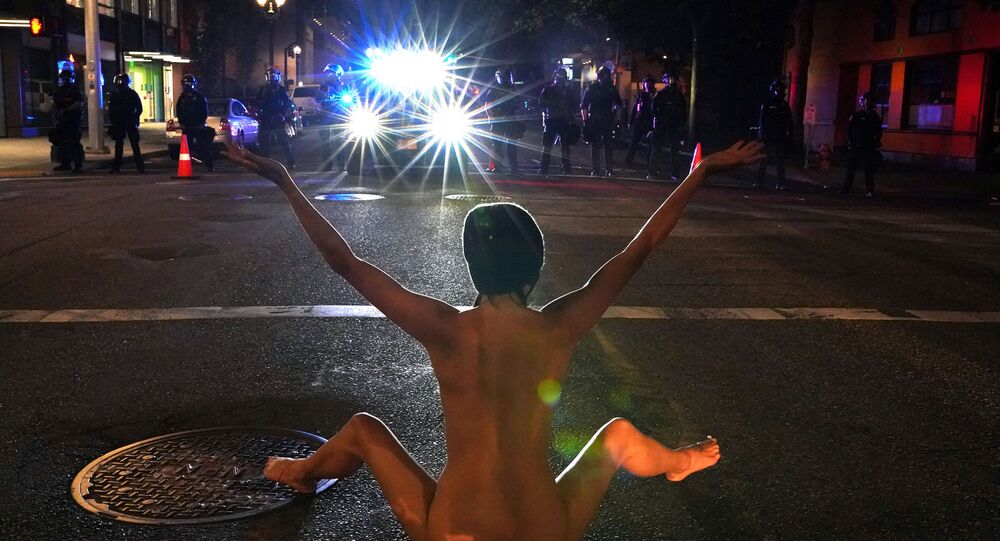 Nudity as Political Protest: Who is 'Naked Athena' and Why She Undressed in Front of Portland Police

During a protest on 18 July the woman took off all her clothes and posed in front of police officers in riot gear wearing nothing but a hat and a mask. At one point she even sat on the ground with her legs apart. Her action later went viral on social media and made headlines around the world, with the media dubbing the woman Naked Athena.

The woman, who bared herself in front of police officers in riot gear during a demonstration in Portland last week has spoken publicly for the first time about her actions. Speaking on the Unrefined Sophisticates podcast she revealed she is a sex worker and her nakedness was "political" as she decided to strip off, because she was offended by the officers’ macho stance.

"All the federal officers and cops, I looked at them and they stand there with this stance. Feet planted, shoulder width apart, arms at their side, chest up, head high, and it's a warrior stance... and it's not earned. The fury arose in me and I told my friends 'I want to be naked, I want to confront them', and my partner said 'I'll hold your clothes', and so I ducked in a doorway and took everything off except my mask and my hat... because its cold. And I walked out there", she told the Unrefined Sophisticates.

The woman, who called herself Jen said she is in her thirties and described the incident as "being in the eye of the storm" and said it was "really calm and terrifying at the same time". Jen revealed that by standing in front of police officers naked she wanted to show the vulnerability of demonstrators.

The power of the human body in its purity! Nothing to hide. #nakedathena #PortlandProtests pic.twitter.com/ubEElhvZo1

​"None of these people [protesters] have weapons. Empty their pockets, take off their clothes—nobody has weapons here. I just wanted them to see what they're shooting at", she told the Unrefined Sophisticates, adding "there's almost not anywhere that you can't find me naked".

Protests against racial discrimination and police brutality have continued in several cities in the United States, including in Portland, Oregon. They were sparked by the death of George Floyd, an African American man, who died at the hands of a white police officer. His death reignited the long-standing debate on racial inequality in the United States and demonstrations subsequently swept the entire country. In many instances they turned into riots with protesters burning buildings, looting stores, and defacing monuments.