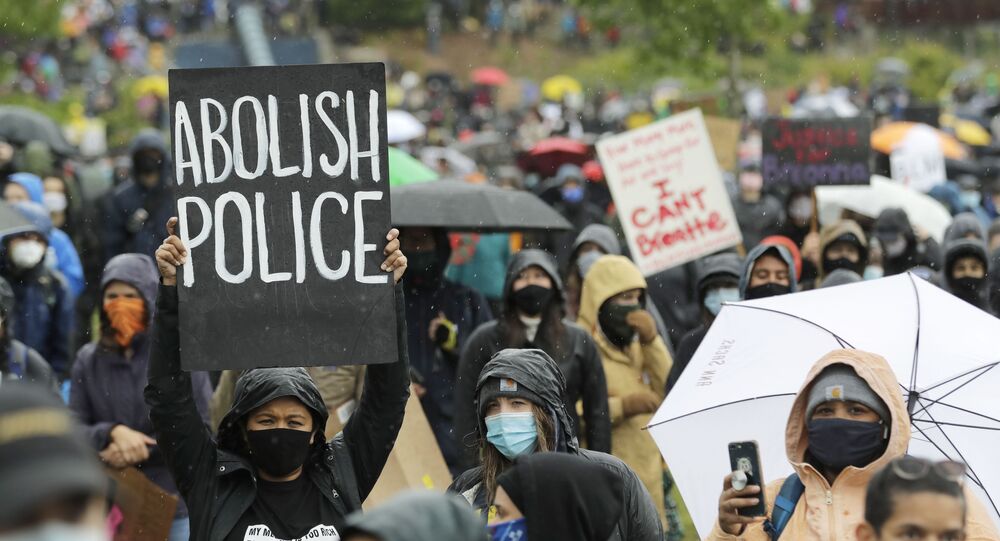 Protests against racial inequality and police brutality across the US have been under way since the death of African American citizen George Floyd in police custody in May.

Seattle police declared the protest against racial injustice in the city a "riot" on Saturday as people vandalised an eastern police precinct, setting a small fire inside and trying to tear down a fence protecting the building.

Law enforcement tweeted that at least 25 people had been arrested in the riot, and one officer hospitalised "with a leg injury caused by an explosive".

It’s not a peaceful protest in Seattle. The crowd are the aggressors. They set fire to a Starbucks right before this. pic.twitter.com/JVIiCxCPut

Officers from the Special Response Team of the US Customs and Border Protection were previously deployed to Seattle, under orders from the Trump administration.

The protests were joined by the Wall of Moms group who claimed that they "marched peacefully until SPD and unmarked Federal Contractors tear gassed a bunch of moms, allies, and youth" on Saturday.

"In broad daylight. With no provocation from peaceful media, or marchers. All Moms (and allies) know we can do better than this", the group tweeted.

The Seattle protests came as new violent clashes broke out between police and protesters calling for racial equality in a number of US cities, including Portland, Louisville, and Chicago.

In Portland, residents gathered for another night of protests earlier on Saturday, after federal agents used tear gas to prevent a violent minority of demonstrators from attacking the federal courthouse.

In Seattle a group of about 150 people were unopposed and marched around destroying businesses, looting, and starting fires

In Portland they are targeting the Federal Police

The police are the barrier between the rioters and innocent civilianshttps://t.co/y5hwhsv102 https://t.co/Y0WMUocBTp

Police have said that one person was stabbed in downtown Portland and a suspect taken into custody as about 4,000 protesters gathered near the courthouse, chanting "feds go home" and "black lives matter".

This followed President Donald Trump sending federal forces to the city to help maintain law and order and to protect the courthouse.

In a separate development, at least three people were shot in Louisville, Kentucky in clashes between Black Lives Matter supporters and members of the right-wing militia Three Percenters on Saturday. The Louisville Metro Police Department confirmed that the shooting took place due to a firearm that accidentally discharged.

Bout to be a militia showdown in Louisville pic.twitter.com/oDKlwX2xGU

In Chicago hundreds of Black Lives Matter protesters marched through downtown, chanting "no justice, no peace, defund the police", hours after a pro-police rally in the city.

"We don't have to fight to be heard. It's easy to get in a fight, but that's not the way we will be heard. We have to speak", South Side resident Lamar Whitfield was cited by the media as saying after the rally.

Los Angeles police have, meanwhile, issued a citywide tactical alert to respond to incidents of vandalism, including broken windows, at a federal building in the city’s downtown area.

The Los Angeles Times quoted police spokesman Anthony Costello as saying that several people have been arrested in connection with the protests, which he said were staged by "isolated individuals".

Protests against racism and police brutality have engulfed the US since the death of black American George Floyd at the hands of a white policeman in Minneapolis on 25 May.