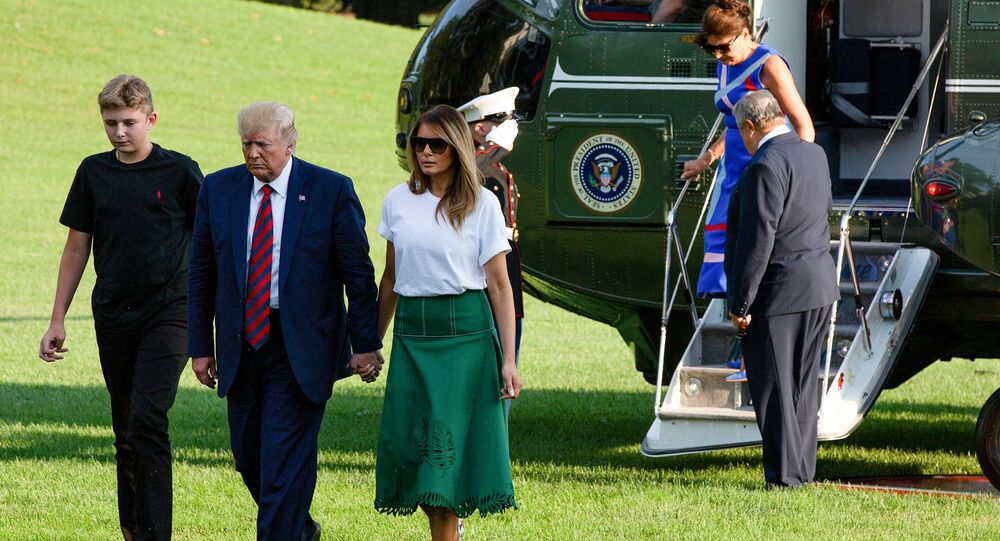 Both President Trump and the First Lady have repeatedly called upon American schools to re-open in September despite a rising number of COVID-19 cases in the country. The president has intimated that he is keen for the children in his family to return to their classes as soon as possible.

The private school of the US president’s 14-year-old son Barron Trump is not planning to fully reopen its doors in September, according to a letter to parents published on its website.

St. Andrew's Episcopal School in Maryland said that its administration has not yet made a final decision in relation to learning methods for the 2020-21 school year, but due to COVID-19 concerns, it was mainly preparing for two scenarios: “distance learning” and “a hybrid model with students learning both on and off campus”.

“We will make a final decision around how to begin the school year and share it with families the week of August 10”, the school’s website reads. “In the meantime, we are continuing to pay close attention to current guidance from state and county health officials, as well as the CDC, as the health status of our region evolves”.

If the hybrid scenario is adopted, St. Andrews students would be able to study both online and on-campus, but only in limited numbers and on rotation.

© REUTERS / OCTAVIO JONES
A general view of Charles Rushe Middle School, where teachers, whose unions are against their members returning to school, will hold a car parade protest in front of the Pasco County School district office in Land O' Lakes, in Pasco County, Florida, U.S., July 21, 2020

Barron Trump started attending the private school in Maryland as soon as he moved to Washington, D.C, but following the coronavirus pandemic, St. Andrew's moved to online learning this spring.

Donald Trump was strongly pushing for schools to return to full-time operations the fall, telling US media on Wednesday that he would be comfortable with both Barron and his grandchildren going back to campus. He later clarified that some schools may have to delay in-person classes, especially those where coronavirus cases were on the rise again. However, Trump said, “every district should be actively making preparations to reopen”.

Barron’s mother Melania Trump has also been reiterating her husband’s calls, saying during an event at the White House two weeks ago that children were missing too much when not physically present in educational facilities.

“They’re missing the laughter of their friends, learning from their teachers, and the joy of recess and play. For children with disabilities, without access to technology or whose homes are not a safe place, the situation can be even worse”, FLOTUS said at that time.

But following Barron Trump school’s announcement that it’s not planning to go back to business as usual just yet, some Americans may be wondering: “If Trump's kid isn't going back to school, why should ours?”.

If Barron trump doesn't have to return to school, NONE of our kids should have to.

Barron Trump doesn’t have to go back to school because his school won’t be fully re-opening.

It’s almost as if the President has one set of standards for him, and one for everyone else.

St Andrews is a private school, they can do what they want. (Although I don’t disagree with you)

Then maybe he needs to go to the local public school.