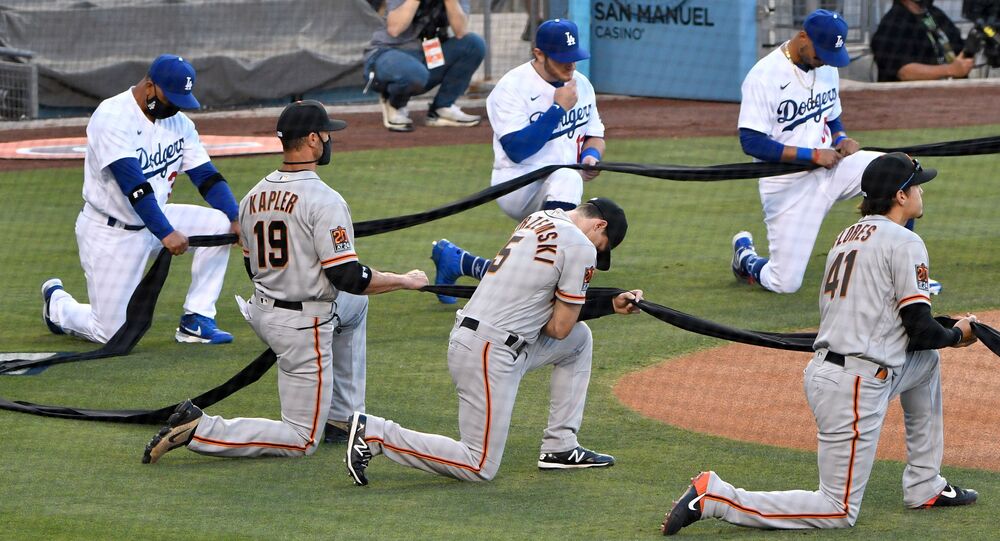 Prior to the opening of the Major League Baseball season on Sunday, players from a number of teams took the knee to express their solidarity with the Black Lives Matter campaign. But not everyone was onboard with the gesture.

S.F. Giants pitcher Sam Coonrod did not kneel in support of the Black Lives Matter movement prior to the game against the Los Angeles Dodgers last Thursday, as photos and videos of the moment revealed. When approached by reporters after the game to comment on why he remained standing – the only player from both teams to do so – Coonrod said it was his religious feelings and some disagreements with the movement that prevented him from dropping to a knee.

"I’m a Christian”, the pitcher explained, as quoted by TMZ. "So I just believe that I can’t kneel before anything besides God”.

... 'I'm A Christian, so I just believe that I can’t kneel before anything besides God.'#GodlyMen #RealMan pic.twitter.com/ha7DmEfbKj

On Thursday, just few days before the official start of the Major League Baseball season, players from the Washington Nationals and New York Yankees, and later those of the S.F. Giants and Los Angeles Dodgers, were given a long black ribbon to kneel in solidarity with the Black Lives Matter protests prior to the National Anthem.

Following a precedent set by American Football quarterback Colin Kaepernick who kneeled during the US national anthem back in 2016, the action is now commonly equated with protests against cases of police brutality and systemic racism.

Back in 2016, Kaepernick’s gesture polarized public opinion. President Donald Trump said after his inauguration in 2017 that Kaepernick and the players who joined him in the protest should be fired from their teams due to their apparent disrespect for the national flag.

Pixabay/CC0
NBA to Paint 'Black Lives Matter' on Court Sidelines After Clearing Social Justice Jerseys - Report
It is now more common to see players, and even officials, kneeling in support with BLM, but many, including Trump, believe that sportspeople should remain standing during the national anthem.

S.F. Giants’ manager Gabe Kapler kneeled both during the black ribbon moment and later during the national anthem. But when asked about Coonrod’s resolve not to follow his team in the gesture, Kapler said that it was the pitcher’s “personal decision”.