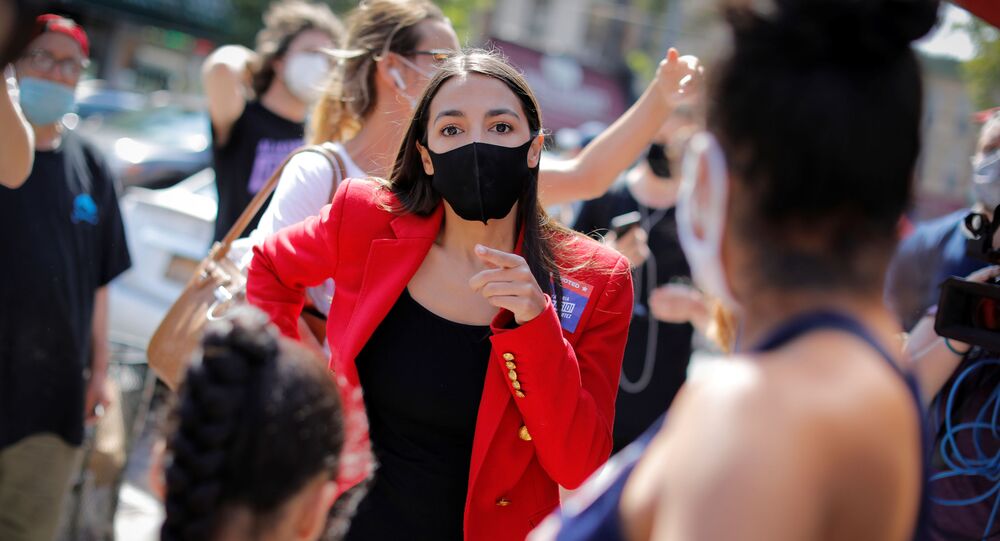 Ocasio-Cortez' post follows the confrontation with the Republican lawmaker on the steps of the Capitol building, where Yoho reportedly used a sexist slur towards the congresswoman.

Democratic lawmaker Alexandria Ocasio-Cortez has shared a short clip of her walking on Capitol Hill with Doja Cat's "Boss B***h" song playing in the background.

The video was first posted on Instagram stories on Wednesday and captioned, "Shine on, fight for others, and let the haters stay mad".

The video has been deemed as a response to Rep Ted Yoho (R-Fla), with whom AOC reportedly had an unpleasant experience outside the Capitol building on 20 July.

A reporter told The Hill that he witnessed a brief exchange between AOC and Yoho during which the latter called the congresswoman "disgusting" and told her, "You are out of your freaking mind," for comments she made suggesting that poverty and unemployment were behind the crime surge in New York City. Ocasio-Cortez replied that he was being rude, and after they headed in different directions, the reporter heard Yoho saying, "f**king b***h", presumably referring to the congresswoman.

Yoho issued an apology later, saying that he was just sensitive about the issue of poverty because he also started with nothing when he was young. It was not enough of an apology for AOC, who tweeted that Yoho did not mention her name and called it a "conversation", when, according to her, it was a "verbal assault".

He didn’t even say my name.

Earlier, his office said that Yoho never called Ocasio-Cortez a name and was referring to her policies.

In a virtual town hall on 12 July, AOC blamed poverty as the reason for the spiking crime rate in New York City, because citizens are struggling to survive and feed their families.

"Maybe this has to do with the fact that people aren't paying their rent and are scared to pay their rent and so they go out, and they need to feed their child and they don't have money, so they feel like they either need to shoplift some bread or go hungry", the congresswoman said.

However, many Americans on social media were angry with her comments, accusing her of trying to present criminals as victims and noting that many of the crimes committed were not tied to citizens in need looking for food, as she said.