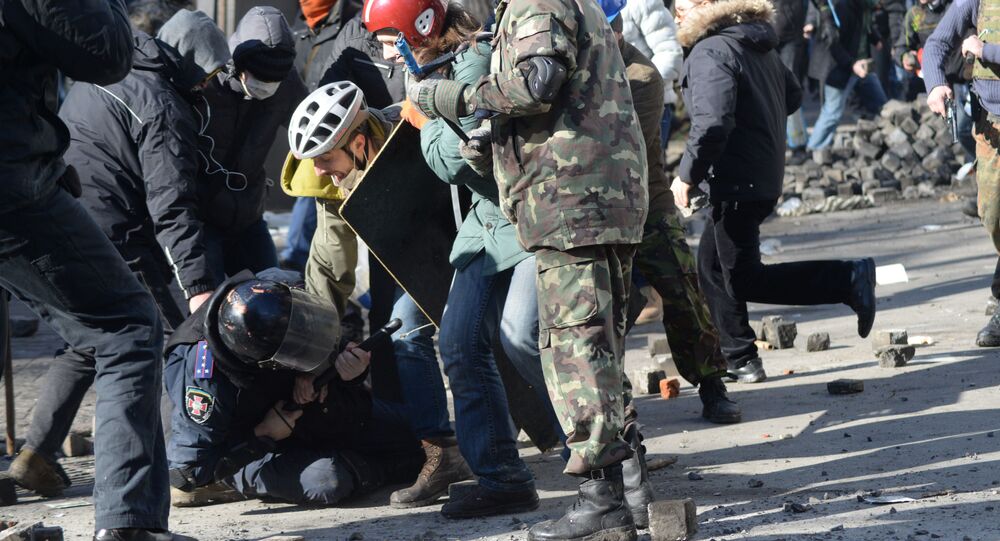 Without a hint of irony, US President Donald Trump’s reelection campaign has used a photo of a violent protest during the 2014 US-backed coup d’etat in Ukraine in an ad intended to play up his administration’s dedication to “public safety” amid heavy criticism of its heavy-handed response to protests in Portland, Oregon.

"Public safety vs chaos & violence," reads the caption of a new Facebook ad by Donald J. Trump for President Inc. The ad shows two images: on one side, Trump stands among police officers who listen as someone speaks; on the other side, an angry group of protesters attacks an officer who has fallen to the ground.

With Trump under such heavy fire for his dispatching of federal police to Portland, who have since been blamed for a dramatic increase in violence against protesters in recent weeks, the message is clear: Trump is on one side, and violent protesters are on the other.

Donald J. Trump for President, Inc.
A Facebook ad by US President Donald Trump's re-election campaign that used an unattributed photo of the February 2014 protests in Kiev, Ukraine

There’s just one problem: these protesters aren’t Americans, and they aren’t fighting against American police. They’re Ukrainian supporters of the Euromaidan movement, and the image comes from the February 2014 coup that supplanted a nominally pro-Moscow leader in Kiev for a firmly pro-Western one, all with strong US support.

The photo was actually a very easy find: it’s hosted on Wikimedia Commons, the public domain archive used for online reference site Wikipedia, under the title “A police officer attacked by protesters during clashes in Ukraine, Kyiv. Events of February 18, 2014-1.”

Four days after the events in the photo, Ukrainian President Vyktor Yanukovych was removed from office by the country’s parliament as Ukraine teetered on the brink of civil war. Months of protests in support of closer association with the European Union erupted in violence in February 2014, driven and amplified by far-right nationalist groups who became the power behind the throne in the new government, which the US played no small part in forming and wasted no time rushing to support.

The photographer, Ukrainian photojournalist Mstyslav Chernov, confirmed to Business Insider that the image was his.

"Photography has always been used to manipulate public opinion. And with the rise of social media and the rise of populism, this is happening even more," Chernov told the publication. "The only way to combat this is through education and media literacy. When people learn to independently distinguish truth from lies, then the number of manipulations will decrease."

According to Facebook’s Ad Library, the ad is now inactive, but it had the potential to reach 1 million people, and the president’s campaign spent less than $100 on it.

Moreover, the Trump campaign’s use of the photo in the ad seems to have violated its terms of use. The photo is listed by Wikimedia Commons as having a Creative Commons 3.0 license, meaning it’s free to use, so long as the photographer is given due credit - credit that is nowhere to be found in the ad.

This is far from the first Trump campaign ad targeting the anti-racist protests to come under scrutiny. Last month, another Facebook ad that postured against the protest group “Antifa,” warning that “dangerous MOBS of far-left groups” are “DESTROYING our cities and rioting,” included a large image of an inverted red triangle. The symbol was also used by the Nazis to denote political prisoners - such as communists, anarchists, and anti-fascist resistors like Antifa - who were prisoners in the concentration camp system. Facebook soon deactivated 88 separate ads using the symbol, a number that observers noted also carries Nazi connotations.

Trump and senior figures in his administration have postured in recent weeks as representing the forces of law and order willing and able to hold back anarchy from overtaking the nation - anarchy enabled by Democratic state and local leaders, according to the Republican president. During a June 1 speech that preceded the violent dispersal of peaceful protesters outside the White House, Trump declared himself to be “your president of law and order.”

While Trump sent federal officers into Portland earlier this month, he has also threatened to send them to other cities as well, including Chicago, New York, Detroit, Philadelphia and Baltimore, all under the ostensible guise of stemming a rising tide of violence. However, as Sputnik reported, violence in Portland was down in the weeks leading up to the arrival of federal police.