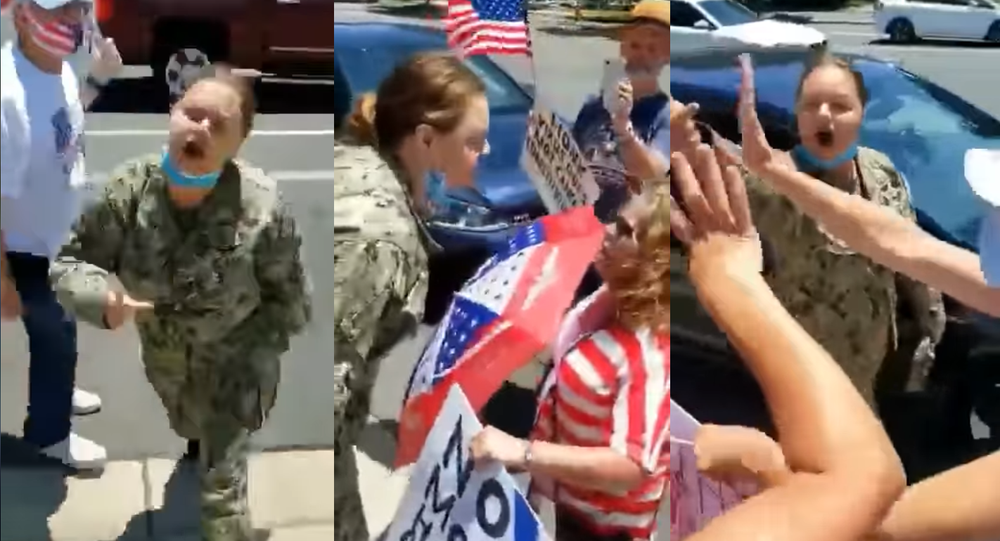 A US Navy petty officer is now under investigation by service officials after a video uploaded to social media earlier this week appeared to show her in uniform, shouting and using profanity while denouncing a group of protesters calling for four more years of US President Donald Trump in the White House.

Footage uploaded to Facebook on July 19 by user Jill Nelson shows a uniformed, female sailor confronting a group of protesters after parking her car directly in front of them. The incident occurred near the Ventura County Government Center in Ventura, California.

“F**k Trump!” she yells at one point while getting in the faces of the political protesters. “F**k you!”

Pro-Trump demonstrators can be overheard saying things such as “shame on you” and “take that uniform off.” One man in particular repeatedly asks the uniformed woman for the name of her commanding officer.

Despite the harsh words, it does not appear as if anyone was harmed during the exchange.

According to the Military Times, the uniformed woman has since been identified by Navy officials as 24-year-old Aviation Boatswain’s Mate (Launch/Recovery) 2nd Class Sarah J. Dudrey.

Dudrey’s California command has also launched an investigation into the matter, but no disciplinary action has yet been announced against the petty officer.

Navy spokesperson Melinda Larson explained to the outlet that while the service is “a proponent of free speech and active-duty members are free to participate in protests during their off-duty time,” members of the Navy cannot do such in this manner - especially while wearing military fatigues.

Eugene R. Fidell, a civilian attorney who specializes in military law, spoke with the Military Times and echoed Larson’s comments, clarifying that the members of the US Armed Forces are supposed to be “apolitical” while wearing their uniforms.

“Somebody ought to take her aside and say, you know, it’s a good idea to keep your political views to yourself while you’re in uniform,” Fidell suggested. “I think she’d get the message.”

Earlier this year, Secretary of Defense Mark Esper warned US troops against making political statements while representing the military.

“As citizens, we exercise our right to vote and participate in government,” Esper expressed in a February 5 memo addressed to all military personnel and Department of Defense civilian employees.

“However, as public servants who have taken an oath to defend these principles, we uphold DoD’s longstanding tradition of remaining apolitical as we carry out our official responsibilities. Maintaining the hard-earned trust and confidence of the American people requires us to avoid any action that could imply endorsement of a political party, political candidate or campaign by any element of the Department.”

Trump: COVID-19 Pandemic ‘Will Probably Get Worse Before It Gets Better’