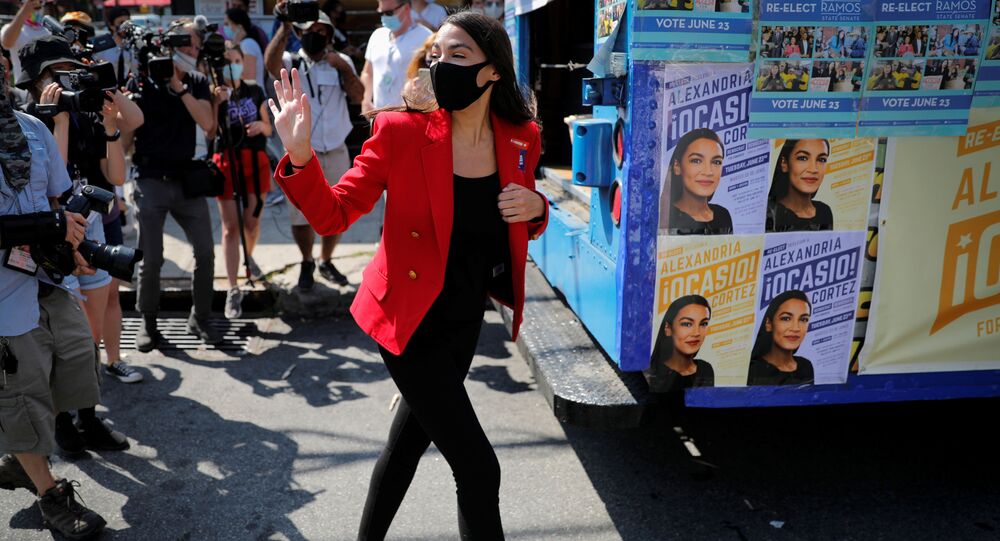 House Majority Leader Steny Hoyer (D-MD) is calling for Rep. Ted Yoho (R-NY) to issue an apology to Rep. Alexandria Ocasio-Cortez (D-NY) after he allegedly hurled a number of expletives and a sexist slur toward his Democratic colleague during a brief exchange.

Ocasio-Cortez took to Twitter on Tuesday to express that while she usually gets along fine with her GOP colleagues, that was not the case when she was allegedly accosted by Yoho on July 20.

I never spoke to Rep. Yoho before he decided to accost me on the steps of the nation’s Capitol yesterday.

Believe it or not, I usually get along fine w/ my GOP colleagues. We know how to check our legislative sparring at the committee door.

According to The Hill, Yoho approached the 30-year-old on the steps of the Capitol building on Monday and told the lawmaker that she was “disgusting” for arguing that poverty and unemployment could explain the rise in crime within New York City.

"You are out of your freaking mind," Yoho reportedly told Ocasio-Cortez, who responded by telling the 65-year-old colleague that he was being “rude.”

As the two began to depart in opposite directions, Yoho, who was accompanied by Rep. Roger Williams (R-TX), continued to discuss his opinion and at one point was overheard using the words “f**king b***h” - presumably referring to Ocasio-Cortez.

"That kind of confrontation hasn't ever happened to me — ever," Ocasio-Cortez told The Hill. "I've never had that kind of abrupt, disgusting kind of disrespect levied at me."

Yoho’s office denied the characterization of events reported by The Hill and argued to right-wing outlet the Daily Caller that he never called Ocasio-Cortez a name.

“It is unfortunate that Rep. Ocasio-Cortez is using this exchange to gain personal attention. Instead, he made a brief comment to himself as he walked away summarizing what he believes her polices [sic] to be: bulls**t,” argued his office.

However, when Yoho himself was approached for his version of the July 20 events, the 65-year-old told The Hill, “No comment.”

As for Williams, the 70-year-old told the outlet that he was too caught up in his own thoughts to pay attention to the exchange that was happening right in front of him.

"I was actually thinking, as I was walking down the stairs, I was thinking about some issues I've got in my district that need to get done," he claimed. "I don't know what their topic was. There's always a topic, isn't there?"

After receiving word of the Texas lawmakers’ comments, Ocasio-Cortez returned to social media to provide her own account of Williams’ conduct, which she said included comments about throwing urine.

What’s wild to me @RogerWilliamsTX is why would you blatantly lie to a reporter who saw this exchange?

You were yelling at me too, about “throwing urine.”

Commenting on the matter to reporters on Tuesday, Hoyer asserted that Yoho’s conduct was “despicable” and “unacceptable.”

“Mr. Yoho owes not only the Congresswoman an apology, but an apology on the floor of the House,” he said, adding that Yoho’s behavior was “the antithesis to John Lewis” and “needs to be sanctioned."

Advocacy group Demand Progress also filed a complaint on Tuesday with the US House Committee on Ethics, alleging that “Yoho used misogynistic and vulgar language to refer to
another Member of Congress on the steps of the US Capitol.” The group concluded its filing with a request for the committee to start a formal investigation into Yoho.

The alleged vitriol stems from Ocasio-Cortez’s recent comments on the spike in New York City crime amid the COVID-19 novel coronavirus pandemic.

Rep. @AOC: "Crime is a symptom of a diseased society that neglects its most marginalized people, and we do not solve that problem with police." pic.twitter.com/IVki5Kenlo

“Crime is a problem of a diseased society, which neglects its marginalized people," she said during a virtual town hall. "Policing is not the solution to crime.”