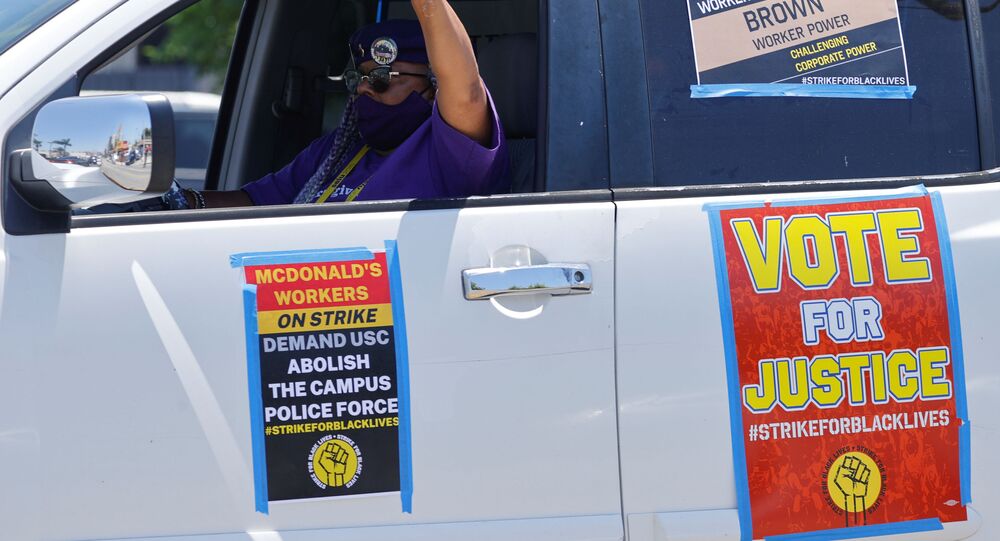 WASHINGTON (Sputnik) - Thousands of workers across the United States have walked off their jobs to join in protest and demand from the authorities and corporations an end to economic disparities that are rooted in racial inequality.

On Monday, more than 50 trade unions and advocacy groups initiated series of protest activities from New York to Los Angeles dubbed "Strike for Black Lives". Participants include ride-share drivers, fast food restaurant employees, workers at retail and delivery chains as well as employees in other lower-paid industries where communities of colour are disproportionately represented.

Organized Workers for Labor Solidarity hold a rally outside of @kcexec’s office on the ntl strike for Black lives. pic.twitter.com/am9LEjC8em

A worker of a fast-food chain in Florida and Fight for $15 activist Trayvonne Williams said she joined the protest to fight for a living wage.

The Fight for $15 movement has said that it seeks increasing the minimum wage in the United States to $15 an hour.

McDonalds workers and activists participate in the Strike for Black Lives. They’re demanding $15/hr and a union, as well as defunding police pic.twitter.com/fvbSYfk1AI

A parade of cars work through South LA en route to USC, one of 25 nationwide strikes for Black lives. Some fast food workers and ridehail drivers walking off the job to draw more attention to income inequality and racism. @KFIAM640 pic.twitter.com/RLz6Zqek6i

The movement said it has sponsored protests across the country, including a march of 1,500 janitors in San Francisco.

Protesters displayed and chanted the popular slogan "We are worth more" during the gatherings.

Demands listed on the movement's website include higher wages, freedom to form unions, healthcare and sick leave for people who are uninsured, and measures "to disrupt the multigenerational cycle of poverty created by their anti-worker attacks".

Protesters said they also demand that ample personal protective equipment is supplied to them because aid inadequate conditions with little opportunities to telework and insufficient protection have made them disproportionately vulnerable to the novel coronavirus outbreak. Studies suggest that black Americans may account for 60 percent of the disease's victims.

Nursing home workers in Detroit are walking out this afternoon to participate in the national Strike for Black Lives. pic.twitter.com/8yTAkoBp2s