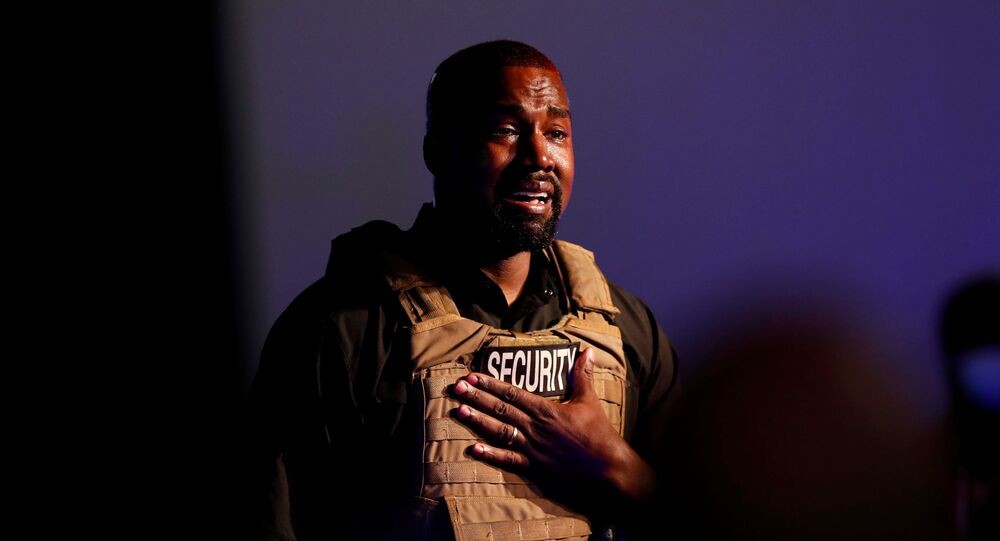 Despite uncertainty around his presidential campaign, caused by reports that he was out of the race for the White House, rapper Kanye West held his first campaign event in South Carolina.

The first campaign rally for Kanye West was held in South Carolina and has been noted as significant, after the rapper appeared in a security vest and with '2020' shaved onto his hair, crying, talking about God, and expressing overwhelming emotion.

Without elaborating his political plans or pointing out that he does not care whether he wins the presidency, West instead shared details of his personal life, revealing that his father wanted to abort him. But his mother, after whom he named his upcoming album DONDA, "saved his life". While telling the story, he apparently began to weep.

Kanye West gets emotional while speaking about abortion in South Carolina:

"My Mom saved my life. My Dad wanted to abort me... There would have been no Kanye West."

"I almost killed my daughter." pic.twitter.com/jiGuODxAno

​He then repented that he was close to following his father's steps, as he "almost killed" his daughter, North, referring to an abortion he and his wife Kim Kardashian discussed before the child was born. West noted that it was God who gave him a message for his wife to not have the medical procedure.

"Even if my wife were to divorce me after this speech, she brought North into this world, when I did not want to", he said.

West repeated assertions that he is in service of God, stressing that he cares about "homeless people in front of Gucci store" and implying that he wished to meet George Soros to discuss building houses, and with Mark Zuckerberg to improve internet connectivity in Africa.

"There are no bad people. There's only lost people. We are all Gods children", West said during his speech.

West moved on to what some social media users denounced as pointless campaign strategy - condemning Harriet Tubman, the iconic American abolitionist activist. The audience in South Carolina could be heard saying "Come on, man" when West offered his sentiments about Tubman.

Kanye West at his “campaign rally” in South Carolina: “Harriet Tubman never actually freed the slaves, she just had them work for other white people.”

Loud groans from the audience, “come on man” can be heard pic.twitter.com/Q9g92UvZ27

​West bragged that he has the "IQ of a genius", noting that he went to a hospital because his brain was too big for his skull.

Kanye West is doing a campaign rally in South Carolina wearing a bulletproof vest talking about being a genius and going to the hospital because his brain was too big for his skull 🤣#TwilightZone2020 pic.twitter.com/FcuT5QDKZG

​Some social media users suggest the rally is more of "a breakdown" that a campaign event, suggesting that it should not have been filmed. Others insist that West and his wife should seek help for his mental health problems - something that West himself revealed in a 2019 interview with David Letterman, remarking that he had a bipolar disorder.

After West tweeted his presidential bid on 4 July - too late for ballot application deadlines - he was reported to be out of the race. It later appeared, however, that West would campaign regardless, struggling to appear on the Oklahoma ballot and asking fans on Twitter to sign up for him in South Carolina.

His move toward the White House race received an endorsement from Elon Musk and Chance the Rapper, while others denounced the move, including US rapper 50 Cent.