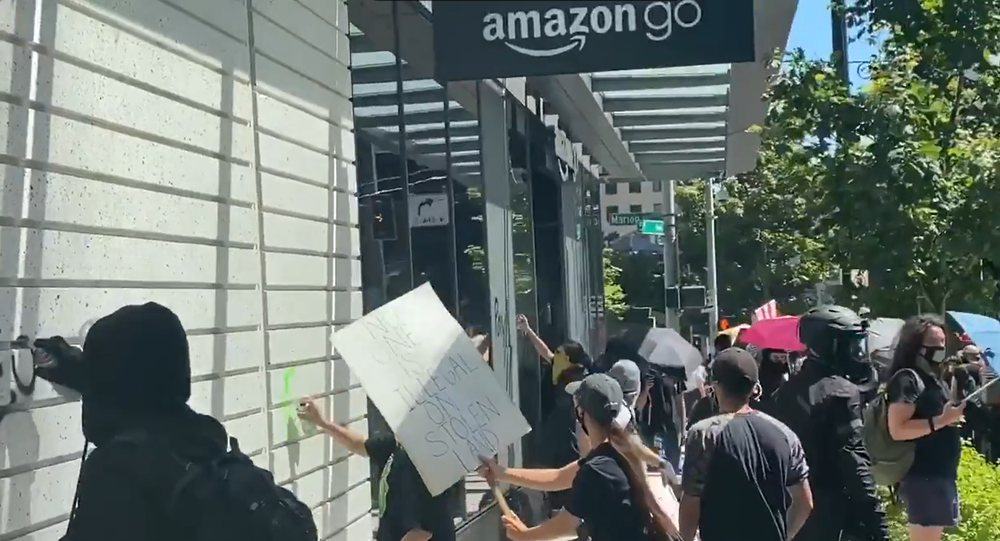 Demonstrators, who went from Westlake Park to the municipal courthouse and then headed north to the West Precinct, have left a trail of destruction and looting, according to police.

At least one police officer was taken to the hospital and two people were arrested outside of the West Precinct, as violent protesters looted stores and threw rocks and bottles at cops in Seattle on Sunday, according to the Seattle Police Department.

In East Precinct, one demonstrator threw a device into a lobby that caused a small fire, which was later put out with no injuries reported.

The police named the incidents as "criminal acts, not peaceful protests".

Demonstrators went from Westlake Park to the Municipal Courthouse and then headed back north to the West Precinct...leaving behind a trail of property destruction. These are criminal acts, not peaceful protests. pic.twitter.com/7GYkDxAg9s

​Videos allegedly made on scene showed rioters breaking into an Amazon Go in downtown Seattle. Other protesters can be seen riding in unmarked cars with the lines "Black Lives Matter" written on them.

Doors of Wallgreens after protesters broke glass and some entered, line of police on Pine before Broadway, that appear to be staying there for the time being #seattleprotest #seattleprotests pic.twitter.com/k5LYOasVC7

​Other video showed a local Starbucks coffee shop wrecked by the rioters.

Antifa wrecked a Starbucks in Seattle during an anti-ICE "protest." pic.twitter.com/ALXgkfjc3l

​Seattle is remembered for protesters setting up a Capitol Hill Occupied Protest(CHOP) zone for over two weeks, occupying several blocks and proclaiming them a 'police-free' zone. The area was cleared after several deadly shootings.