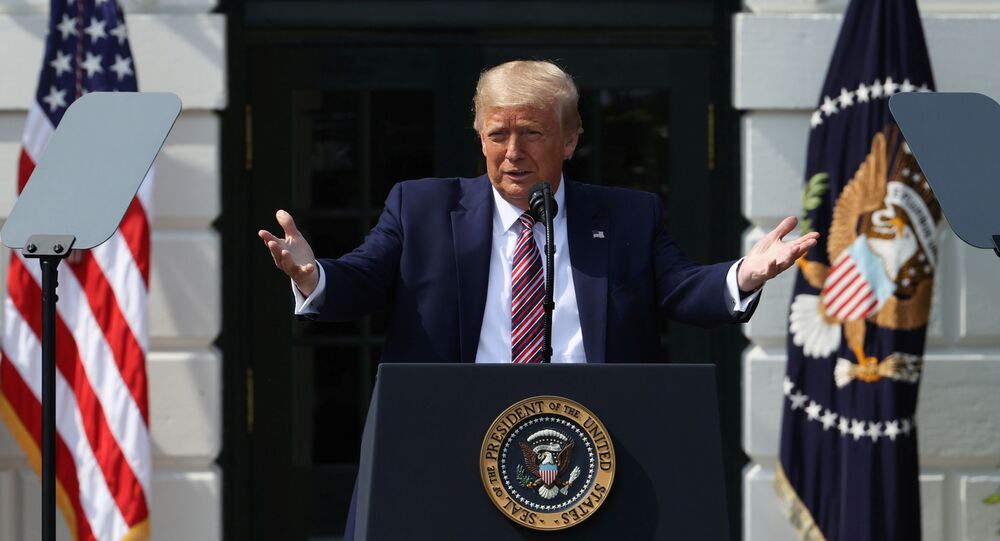 MOSCOW (Sputnik) - US President Donald Trump is replacing his campaign rallies with "tele-rallies," he told his supporters in Wisconsin.

"I wanted to be with you, and this is really replacing our rallies that we all love so much," Trump said during his first tele-rally on Friday, as quoted by CNN on Saturday. He told his Wisconsin supporters dialed into a telephone call that "we're doing really well with the therapeutics and vaccines, but until that gets solved it's going to be tough to have those big massive rallies, so I'm doing telephonic rallies, and we'll call them the Trump rallies, but we'll do it by telephone."

Trump praised the US coronavirus testing program, saying it is the best in the world and that already 50 million people in the US have been tested.

Trump’s Portsmouth, New Hampshire rally has been postponed with no new date set.

Trump’s 20 June rally in Tulsa, Oklahoma, which was his first campaign event since March, when the COVID-19 lockdown began in the US, saw a lower attendance than expected. Over 6,000 people gathered in Tulsa, according to US media reports, which claimed that social distancing rules were not observed at the event in Tulsa.

According to Trump’s re-election campaign, six members of the advance team preparing for the Tulsa rally had tested positive for the coronavirus. According to the Washington Post newspaper, dozens of the US Secret Service officers who worked at Trump’s campaign rally in Tulsa were ordered to self-quarantine for 14 days after two of their colleagues were diagnosed with COVID-19 - both of them were reportedly infected at the rally.

The coronavirus infection has been spreading rapidly in the United States, with a new daily record of over 76,000 coronavirus cases reported on Saturday.

The US has the largest number of confirmed COVID-19 cases (over 3.7 million) out of all the countries and the highest COVID-19 death toll (over 140,000), according to the latest data from Johns Hopkins University.