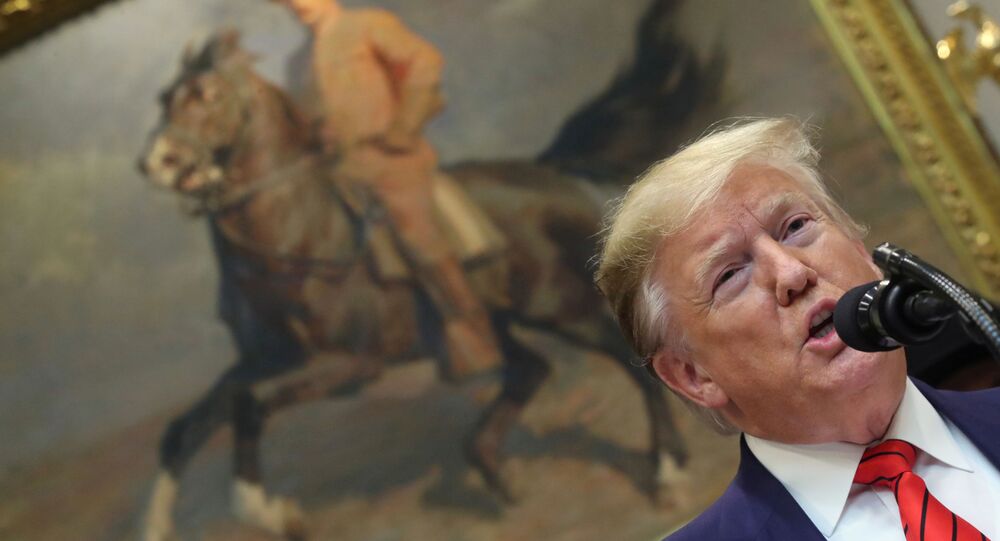 According to a tradition that began with American painter Gilbert Stuart's portrait of the first US president, George Washington, and has lived up to modern times, US presidents can display paintings of their former counterparts who they admire around the White House.

Presidential portraits of Bill Clinton and George W. Bush have been moved from prominent places in the Grand Foyer and replaced with those of William McKinley and Theodore Roosevelt, CNN reported.

According to the report, the modern portraits remained in place at least until 8 July, when Trump welcomed Mexican counterpart Andres Manuel Lopez Obrador to the White House. During this visit, Clinton and Bush could be seen in the Cross Hall, as they had been throughout Trump's term.

CNN claims, however, that the portraits have been moved into the Old Family Dining Room, a smaller and rarely used area that is not typically seen by visitors, and not noted on the list of locations to be visited during public tours.

"President and Mrs. Trump did not want that room showcased on public tours," an official source said, cited by CNN, who also said that the room is currently used for storage.

The report notes that the placement of the Clinton and Bush portraits now safeguards Trump from seeing them on a daily basis.

According to CNN, Trump gives the appearance of seeking to affiliate himself with McKinley and Roosevelt, earlier denouncing a decision to remove and store Roosevelt's Museum of Natural History statue in New York, labeling the move "ridiculous". Trump also asked to rename Alaska's Denali (The Great Mother), the tallest mountain in the US, to Mount McKinley in a bid to roll back changes made during the two-term presidency of Barack Obama, whose portrait is not expected to be officially unveiled while Trump remains in the White House.

© REUTERS / TOM BRENNER
U.S. President Donald Trump walks down Cross Hall ahead of an event held to discuss an administration plan aimed at helping to prevent suicides by U.S. veterans and other Americans, at the White House in Washington, U.S., June 17, 2020.

The tradition, started by George Washington, suggests that every US president has an official portrait, usually an oil painting, although the adoption of technology now allows the portrait to be a photograph, as will be the case of for former US President Barack Obama.

A sitting president may display portraits of their former counterparts that they admire anywhere in the White House, borrowing them at need from the National Portrait Gallery. Portraits have been collected in the gallery since its creation in 1962.