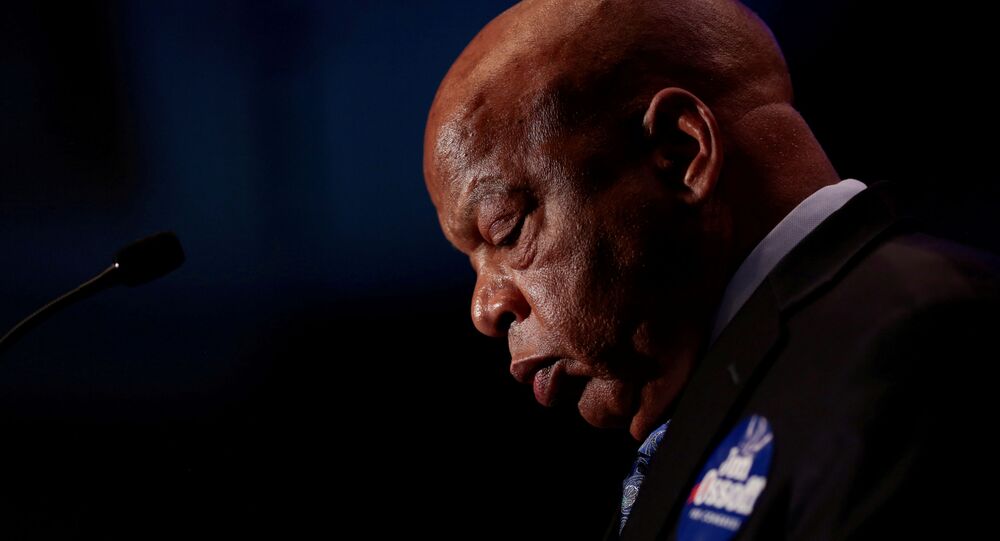 Democratic House Representative John Lewis was a civil rights leader awarded the Presidential Medal of Freedom and famous for playing a key role in ending legalized racial segregation in the United States. He was a part of the "Big Six" - a group of prominent civil rights leaders behind Washington's 1963 March for Jobs and Freedom.

Netizens slammed US President Donald Trump for commenting on the death of Representative John Lewis, a prominent civil rights leader who died from cancer on 17 July at the age of 80.

Throughout the day, there had been no statements from the president, and the head of the Congressional Black Caucus, Karen Bass, urged him to let it stay that way, asking Trump to "say nothing" and "let us mourn in peace".

Trump, however, expressed his and the first lady's condolences toward Lewis' family in a laconic tweet which immediately received backlash - both for the fact of publication and for a misspelling of "him and his family".

"Saddened to hear the news of civil rights hero John Lewis passing. Melania and I send our prayers to he and his family", the tweet reads.

Saddened to hear the news of civil rights hero John Lewis passing. Melania and I send our prayers to he and his family.

​Users were particularly enraged with Trump "playing golf today instead of saying anything", while some reports said that he had tweeted from his motorcade while heading back to the White House from his golf club.

Everyday Trump's proves that why he is Worst President Ever pic.twitter.com/TIvTpqvGxw

"to he" offends me as a retired English teacher.

You were up late last night, tweeting about GARBAGE long after the world learned of the passing of Rep. John Lewis.

Then you went and played golf today instead of saying anything.

NOW say "Black Lives Matter," because HIS certainly did.

John Lewis will forever be remembered as an American hero.

Donald Trump will forever be remembered as an American disgrace.

​Some echoed Karen Bass, suggesting that Trump should not have said anything at all.

keep John Lewis's name out of your mouth

As expected your words are meaningless. Maybe it would have been better if you didn’t say anything at all.

​There were some users, however, who noted that there was no way for Trump to escape condemnation, as he would be criticized in both options.

The media and Democrats were going to hate on President Trump whether or not he released a statement on this.

Consider the angry comments leftists post below in response to the President's kind/simple tweet for #RepJohnLewis and his family.

So completely consumed by searing hated they are rendered entirely incapable of even pausing their onsluaght for a solitary moment.

​Representative John Lewis was a prominent figure in the US civil rights movement and the movement to end legal racial segregation in the United States. A head of the Student Nonviolent Coordinating Committee (SNCC), he was one of the members of the Big Six group who organized Washington's 1963 March for Jobs and Freedom, advocating civil and economic rights for African Americans.

US Congressman and Civil Rights Icon John Lewis Dies at 80