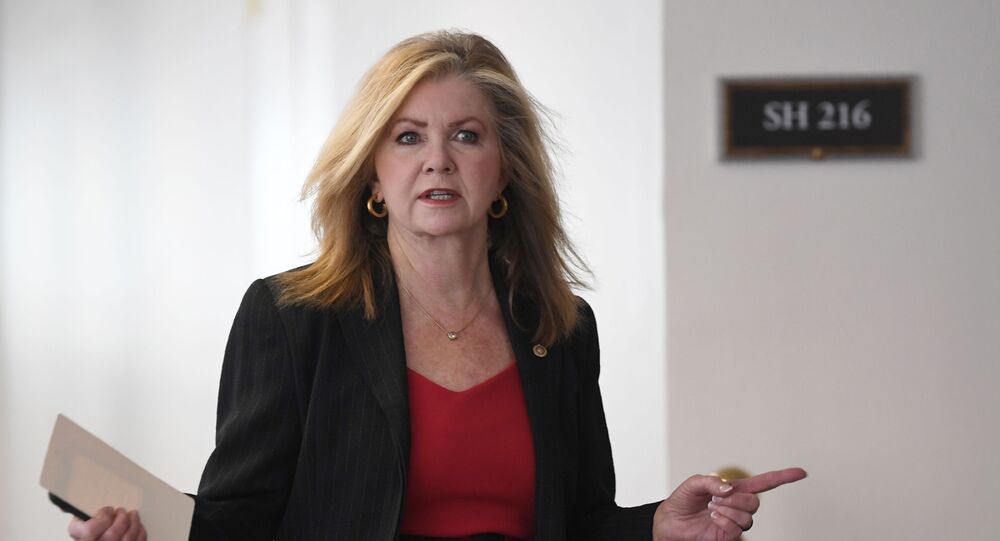 The senator was previously ostracised for her criticism of the Black Lives Matter movement and lambasted online by a former Clinton campaign adviser, both of which took place amid US-wide anti-racist protests, largely led by the BLM movement.

Republican Senator Marsha Blackburn has lambasted comments made by a grassroots organiser for the 2016 Hillary Clinton campaign, Democrat Adam Parkhomenko, calling his racism accusations against her “another example of the virulent response to people who oppose leftist orthodoxy”. Blackburn noted that left-leaning politicians never apologise and never “make excuses”, remarking on Parkhomenko’s claims that the Republican senator is "inbred racist trash".

No surprise here. Typical Dem ignorant response with the use of profanity and or violence 🥱

Blackburn went on to suggest that Parkhomenko’s comments about her were perceived as a little too much by the majority of the audience.

“This is one of Hillary Clinton's inner circle and I think that's what surprised many people. People felt like it was over-the-top”, she said.

Discussing Parkhomenko’s scolding remarks about her and how left-leaning people are allegedly not prone to make excuses, Blackburn also addressed another phenomenon, the so-called "cancel culture" – the practice of calling for a boycott of a personality or a company that somehow disagrees with someone’s socio-political stance. The senator alleged that “cancel culture” is mostly used by left-leaning people, and opined that this behaviour is "what happens in socialist and Marxist societies".

"If you disagree with anyone on anything with some of these leftists, then all of a sudden everything to do with you [...] is considered all bad and cancelled out", Blackburn said.

Cancel culture has been gaining traction recently, extending well beyond the infighting on the American political scene. The phenomenon has also been used by a variety of social justice-related movements, such as by proponents of LGBTQ+ rights, and has begun to affect not only conservative figures, but also those with viewpoints perceived as being more progressive.

This recently led to 150 luminaries and activists signing a joint letter that decried all forms of online shaming, including “cancel culture”. The letter was signed by numerous prominent people, including philosopher Noam Chomsky, feminist Gloria Steinem, and author J.K. Rowling, who herself recently fell victim to similar calls over her remarks criticising the use of the term “people who menstruate” instead of women and erasing the concept of sex.

I was very proud to sign this letter in defence of a foundational principle of a liberal society: open debate and freedom of thought and speech.https://t.co/noh8VRHMyN

Blackburn’s Criticism of BLM Amid US Protests

Senator Blackburn's comments come in response to Parkhomenko’s accusations of racism and a “request” that the senator to “please, f**k off”. The former Hillary Clinton campaign member reacted in this manner in response to a post by Blackburn on Twitter in which she called Black Lives Matter an organisation “run by trained Marxists” and argued that the lives of all Americans matter. The senator also called for preventing the destruction of the US “under the pretence of social justice”.

Her Twitter post came amid ongoing anti-racism protests across the country, spearheaded by the BLM movement. The demonstrations began at the end of May after a police officer killed African-American man George Floyd in the process of apprehending him. Protesters have accused law enforcement of police brutality and racism when arresting members of ethnic minorities, as videos showed that the police officer in Minneapolis placed his knees on Floyd’s neck and back as he was pinned down to the ground and struggled to breathe.

The protests in the US have often turned into riots accompanied by looting and later by the toppling of statues of historical figures somehow linked to slavery and racism. The destruction of the monuments sparked harsh condemnation from the White House, with President Donald Trump accusing the “radical left” of organising such acts and threatening those who are found guilty of desecrating historical objects with lengthy prison terms.

Chick-fil-A, the Latest Victim of ‘Cancel Culture’ and ‘Censorious Left’